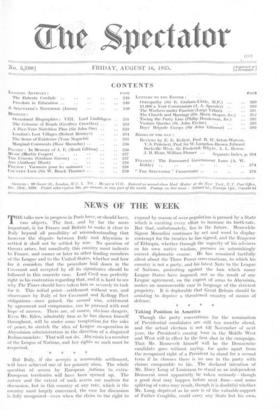 • But Italy, if she accepts a reasonable settlement, will

have achieved one of her primary aims. The whole question of access by European .nations to extra- European territories will have been opened up. The nature and the extent of such access are matters for discussion, but in this country at any rate, which is the country most largely concerned, the case for discussion is fully recognized--even when the claim to the right to expand by reason of over-population is pressed by a.State which is exerting every effort to increase its birth-rate. But that, unfortunately, lies in the future. Meanwhile Signor Mussolini continues by act and . word to display contempt for the treaties he has signed, and the Emperor Of Ethiopia, whether through the sagacity of his advisers Or his own .native wisdom, pursues an astonishingly correct diplomatic course: Re has remained tactfully silent about the Three Power conversations, to which his country is not a party, and his latest Note to the League of Nations, protesting against the ban which many League States have imposed, not as the result of any League agreement, on the export of arms to Abyssinia, Makes an unanswerable case in language of the strictest propriety. It is deplorable that Great Britain should be assisting to deprive a threatened country of means of defence.