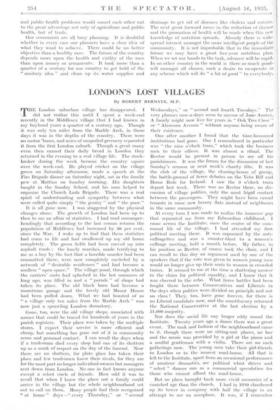 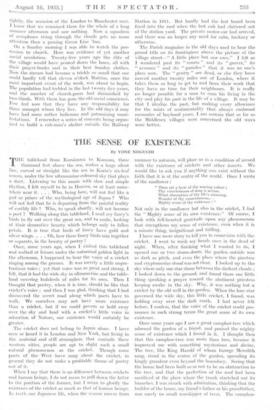 THE London suburban village has disappeared. I did not realize this until I spent a week-end recently in the Middlesex village that I had known in my boyhood years a quarter of a century ago. Though it was only ten miles front the Marble Arch, in those days it was in the depths of the country. There were no motor 'buses, and acres of unspoiled greenery separated it from the first London suburb. Though a great many even then earned their daily bread in London they returned in the evening to a real village life. The stock- broker during the. week became the country squire over the week-end. He played cricket on the village green on Saturday afternoon, made a speech at the Fire Brigade dinner on Saturday night, sat in the family pew at Mattins on Sunday morning. His daughters taught in .the Sunday School, and his sons helped to organize the Church Lads Brigade. , There . was a real spirit of understanding and. sympathy between what were called quite simply " the gentry " and " the poor." . It is all gone now. I was staggered by the physical changes alone. The growth of London had been up 'to then to me an affair of statistics. I had read uncompre- hendingly that according to the last census returns the population of Middlesex had increased by 80 per cent since the War. I woke up to find that these statistics had come to life and had swallowed up my old home completely. The green fields had been carved up into asphalt roads ; the lonely marshes, made terrifying to me as a boy by the fact that a horrible murder had been committed there, were now completely encircled by a network of " desirable residences " and had become a soulless " open space." The village pond, through which the carriers' carts had splashed in the hot summers of long ago, was filled in and a " parade of shops had taken its place. The old black barn had become a monstrous garage and the lovely old Manor House had been pulled down. What we had boasted of as a village only ten miles from the Marble Arch " was now just a sprawling London dormitory.

• Gone, too, were the old village shops, associated with names that could be traced for hundreds of years in the parish registers. Their place was taken 'by the multiple stores. I expect their service is more efficient and cheap, but something has gone out of it in community sense and personal contact. I can recall the days when if a tradesman died every shop had one of its shutters up as a mark of respect on the day of the funeral. Now there are no shutters, for plate glass has 'taken their place and few tradesmen know their rivals, for they are for the most part no longer individual owners but managers sent down from London. No one in fact knows anyone except a select circle of friends. How odd it was to recall that when I knew the place not a family could arrive in the village but the whole neighbourhood set out to call on them. Many people had their recognized at home " days—" every Thursday," or " second Wednesdays," or " second and fourth Tuesdays." The very phrases now-a-days seem to savour of Jane Austen. .A: family might now live for years in " Oak Tree Close " or " Abercern Avenue " without anyone. being aware of their existence.

One after another I found that the time-honoured institutions had gone. One I remembered in particular was " the nine o'clock train," which took the business men to their offices. It was almost a ritual. The Rector would be present in person to see off ,his parishioners. It was the forum for the discussion of last Sunday's sermon or next week's charity fete. It was the club of the village, the clearing-house 'of gossip; the battle-ground of fierce debates on the Veto Bill and Home Rule for Ireland. I saw the 9 o'clock train depart last week. There was no RectOr there, no disL. cussion of village politics, only the most frigid contact between the passengers. They might have been casual tenants in some new luxury flats instead of neighbours in the same community.

At every turn I was made to realize the immense gap that separated me from my Edwardian childhood. I Caine across the Institute; once the centre of the com- munal life of the village. I had attended my first political meeting there. It was organized by the anti- suffragettes and was a counter-blast' to a women's suffrage meeting, held a month before. • My lather; in his position as Rector, of course took the chair, and I can recall to this day an argument used by' one of the speakers that if the vote was given to women young men would no longer give up, their seats to women in crowded trains. It seemed to me at the time a shattering answer to the claim for political equality, and I know that it was cheered to the echo. What fierce baffles.. had been fought there between Conservatives and Liberals in the days when politics were divided on principle.and not on class ! They, too, have gone forever, for there is no Liberal candidate now, and the constituency' returned the National Conservative at the last election by a 51,000 majority.

Nor does the social life any longer eddy round the Institute. Twenty years ago a dance there was a great event. The rank and fashion of the neighbourhood came to it, though there were no sitting-out places, no bar and the •music was provided by a girl at the piano and a soulful gentleman with a violin. There' are no such gatherings now. The young men take their girl-friends to London or to the • nearest road-house. All that is left to the Institute, apart from an occasional performance of amateur dramatics, are political whist drives and " select " dances run as a commercial speculation for those who cannot afford the road-house.

But no place brought back. more vivid memories of a vanished age than the church. I had in 1910 clambered up its tower in company with half ;the village in an attempt to see an aeroplane. It was, if I remember rightly, the occasion of the London to Manchester race. I know that we remained there for the whole of a long summer afternoon and saw nothing. Now a squadron of aeroplanes rising through the clouds gets no more attention than a passing Green Line 'bus.

On a Sunday morning I was able to watch the pro- cession to church. Here was evidence- of yet another social revolution. Twenty-five years ago the elite of the village would have poured down the lanes, all with their prayer-books and in their best Sunday clothes. Now the stream had become a trickle so small that one could hardly tell that eleven o'clock Matins, once the most important event of the week, was about to begin. The popiihitien had trebled in the last twenty-five yearS, and the number of church-goers had diminished by two-thirds. With them has gone the old social conscience. Few feel now that they have any 'responsibility. for those amongst, whom they live. In the old days it may have, had some rather ludicrous and patronizing mani- festations, I remember a series of concerts being organ- ized to build a cab-man's shelter outside the Railway Station in 1911. But hardly had the last board been fixed into the roof when the last cab had clattered out of the station yard. The private motor-car had arrived, and there was no longer any need for cabs, hackney or otherwise.

The Parish magazine in the old days used to bear the -proud title on its frontispiece above the picture of. the village street—" A little place but our own." I felt as I wandered past its " courts " and its " groves," its " avenues " and its " parades " that it was no one's place now. The " gentry " are dead, or else they have .moved another twenty miles out of London, where it takes them so long to 'get to and from their work that they have no time for their neighbours. It is really no longer possible for a man to earn his living in the city and play his part in the life of a village. It may be that I idealize the past, -but making every allowance for the mists of sentimentality that always enshroud memories of boyhood years, I am certain that so far as the Middlesex villages were concerned the old ways were better.