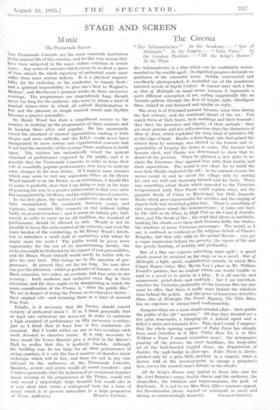 " Der Schimmelreiter." At the Academy.---" Star of Midnight." At the Empire.—" False Faces." At the London Pavilion.—"All the King's Horses." At the Plaza.

Der Schimmelreiter is a film which can be confidently recom- mended to the middle-aged ; its dignified progress demands no quickness of the cinematic sense. Solidly constructed and excellently photographed, it reminded me of the ponderous talented novels of Sigrid Undset. It cannot meet such a film as Star of Midnight on equal terms because it represents a quite different conception of art, sailing majestically like an Armada galleon through the fleet of bright, agile, intelligent films, sniped at and harassed and unable, to reply.

The story is of Friesland peasant farmers, some time during the last century, and the continual threat of the sea. You watch them at their feasts, their weddings and their funerals ; they have the grossness and dignity of their animals ; they are more genuine and less self-conscious than the characters of Man of Aran., which exploited the same kind of primitive life at the edge of land: Hauke, a farm hand, who had gained the richest farm by marriage, was elected to the honour and re- sponsibility of keeping the dykes in order. The farmers had become slack, and Haukc was determined to show that he deserved his position. When he planned a new dyke to re- claim the foreshore, they opposed him with their inertia and their superstition. The moral is not clear, for to build the new dyke Hauke neglected the old ; in the autumn storms the waves swept in and he saved the village only by cutting his own sea wall and drowning himself and his farm. There was something about floods which appealed to the Victorian temperament (only Herr Freud could explain why), not the gigantic floods of China or Mississippi, but little domestic floods which gave opportunities for sacrifice and the ringing of church bells and drenched golden hair. There is something of this atmosphere about Der Schinamelreiter ; it takes one back to The Mill on the Floss, to High Tide on the Coast of Lincoln- shire, and The Sands of Dee ; the wind that blows so sombrely, banking the clouds over these drab Friesian fields, has shaken the windows of many Victorian parsonages. The moral, as I say, is confused, as confused as the religious beliefs of Charles Kingsley, but that only adds tb the period flavour : you get a vague impression behind the poverty, the rigour of life and the greedy feasting, of nobility and profundity.

But of a film one expects something more agile : a speed which cannot be attained on the stage or in a novel. Star of Midnight, a light, quick, sophisticated comedy, in which Miss Ginger Rogers takes Miss Myrna Loy's place as Mr. William Powell's partner, has no content which one would trouble to read in a novel or to praise in a play. It is all suavity and amusement, pistol-shots and cocktails ; but I am uncertain whether the Victorian proftindity of the German filin has any more to offer, that there is really more behind the whiskers than behind the polish. And this genre of humorous detective films, Star of Midnight, The Trunk Mystery, The Thin Man, has no superiors in stream-lined craftsmariship.

Gangster films are a more simple-minded affair : their public the public of the old " westerns." All that they demand are a few grim wisecracks, a bumping-off, a federal agent and a fellow's sister and romantic love. They don't mind, I suppose, that the whole opening sequence of False Faces has already been used '(whether in G Men, Public Hero No. 1, or Mesa Without a Name I cannot remember now) : the newspapers pouring off the presses, the scare headlines, the keep-calm air of the bald-headed Capitol dome, the Department of Justice, the eagle-badge, in close-ups. False Faces is distin- guished only by a grim little incident in a surgery, when a doctor, told at the revolver-point to change a gangster's face, carves the wanted man's initials on his cheeks.

All the King's Horses may appeal to those who care for Mr. Carl Brisson's smug, boyish charm and the uniforms, the chancellors, the whiskers and impersonations, the junk of Ruritania. It is sad to see .Miss Mary Ellis's sensuous appeal, her Bacchanalian gleam, wasted on sentiment so sweet and daring, so embarrassingly domestic. GaAnArd GREENE.