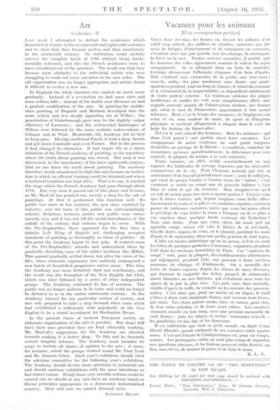 Academies—II Lssr week I attempted to defend the academies whIch flourished in France in the seventeenth and eighteenth centuries and to shoW that they became useless and then reactionary in the nineteenth century. No institution could usefully survive the complete break of 1789 without being funda- mentally reformed, and this the French academies seem to have considered out, of the question. The result was that they ,became mere obstacles to the individual artists who were struggling to work out some salvation in the new order. The ;old organization was no longer appropriate and artists found it difficult to evolve a new one.

In England the whole business was carried on much more gradually. Instead of a revolution we had sonic riots and some reform bills ; instead of the battle over Hernani we had a gradual modification of the arts. In. painting the middle- .class painting of Hogarth and Morland developed into the more widely and less deeply appealing art of Wilkie ; the penetration of Gainsborough gave way to the slightly vulgar efficiency of Lawrence ; and the sentimental landscapes of Wilson were followed by the more realistic water-colours of Cotman and de Wint. Meanwhile, the Academy did its best to keep pace. Having swallowed Fuseli, it took a deep breath and got down Constable and even Turner. But in the process it had changed its character. It had begun life as a direct imitation of the French academy of painting, as the repository .where the truth about painting was stored. But soon it was discovered, in the uncertainty of the later eighteenth century, that no one knew the truth about painting. The academy therefore slowly abandoned its high line and became an institur tion in which an efficient training could be obtained and where a technical tradition was kept alive. That is to say, it reached the stage which the French Academy had gone through about 1770. Hirt very soon it passed out of this phase and became, as Mr. MacColl has pointed out, merely a shop for the sale of paintings. At first it performed this function well. Its public was more or less uniform, the new class enriched by industry, and the taste of this public was correspondingly .reliable. Relations between artists and public were conse- quently easy and it was not till the social disturbances of the middle of the century that schisms began to occur. With the Pre-Raphaelites there appeared. for the first time a definite Left Wing of English art, challenging accepted standards of painting as thoroughly as those of politics. At this point the Academy began to lose grip. It resisted some of the Pre-Raphaelites' attacks and undermined them by gradually absorbing sonic of the milder brethren like Millais. This qUarrel gradually settled down, but after the crisis of the 80's, when economic supremacy was suddenly endangered, a new batch of dissatisfied progressive artists 'arose.- This time the Academy was more definitely rigid and reactionary, and the result was the formation of the New English Art Club, which was later followed by a series of other indePendent groups. The Academy continued its line of reaction. The public was no longer .uniform in its taste and could no longer be dictated to as in the earlier nineteenth century. So the Academy catered for one particular section of society, and Was only prepared to take a step forward when some artist had established a sufficiently wide popularity at the New English to be a sound investment for Burlington House.

In the present chaos of western European society no elaborate organization of the arts is possible. But shops still have their uses provided they are kept efficiently working; Mr. MacColl's suggestions for the Academy are directed. towards making it a better shop.' To this end he demands certain tangible reforms. The Academy must broaden its scope to include all 'shades of opinion in the arts ; it must, for instance, admit the' groups centred round Mr. Paul Nash and Mr. Duncan Grant. Each year's exhibitors should elect the selection committee for the 'following year's exhibition. The Academy should devote more attention to industrial art and should continue exhibitions with the same intentions as last winter's show. If only these very sensible reforms could be carried out we should at any rate have an Academy based on liberal principles appropriate to a democratic industrialized country. Here and now we cannot demand more. •