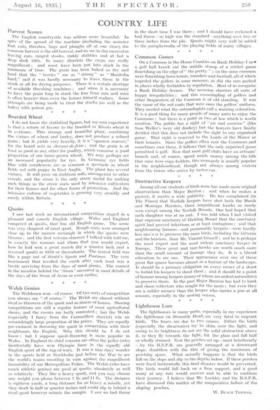 Quoits I. saw last week an international competition staged in a pleasant. :Ind Comely English village. Wales and England competed at quoits, that fine old English game. The scene was very, eloquent of rural sport. Rough seats were arranged close tip to the narrow rectangle in which the quoits were thrown ; and the first veteran observer I talked with told me, in exactly the manner and idiom that you would expect, how he had wan a great match (by a quarter inch and a reversed quoit) in 1870 or thereabouts. ' The tented field was like • a page out of Strutt's Sports and Pastimes. The very instrument that levelled the earth after each bout was a beetle surviving from the days of rural giants. The contest in the MeadOsv behind the `Swan' savoured in most details of the daya of the Swan or Avon or even earlier,