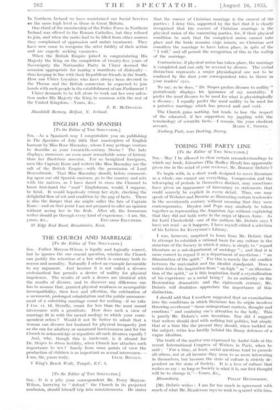 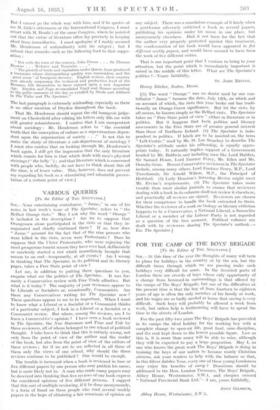 [To the Editor of THE SPECTATOR.] Sin,—May I be allowed to clear certain misunderstandings to which my book, Literature (The Bodley Head) has apparently given rise in the.mind of your reviewer, Mr. Bonamy Dobree ?

To begin with, in a short work designed to cover literature as a whole, one cannot say everything. Compression and the telescoping of periods in themselves distinct, may sometimes have given an appearance of inaccuracy to statements that could scarcely be explicit in every detail. Thus, one may speak of Webster and Browne as illustrating certain tendencies in the seventeenth century without meaning that they were contemporaries. Dryden and Pope may similarly be taken together as representing the Augustan Age without explaining that they did not both write in the reign of Queen Anne. As for Lord Chesterfield—one of the authors Mr. Dobree says .I have not read—as it happens, I have myself edited a selectio4 of his Letters for Everyman's Library.

I was, however, surprised to learn from Mr. Dobree that to attempt to establish a rational basis for any culture in the structure of the Society in which it arises, is simply to " regard. literature as a sub-department of sociology " ; and that it is more correct to regard it as a department of mysticism : " an illumination of the spirit." For this is merely the old conflict between the materialist and the idealist standpoint. Does a writer derive his inspiration from " on high " as " an illumina- tion of the spirit," or is this inspiration itself a crystallization of his experience as a social being ? As an authority on the Restoration dramatists and the eighteenth century, Mr. Dobree will doubtless appreciate the importance of this distinction.

I should add that I nowhere suggested that an examination into the conditions in which literature has its origin involveS throwing overboard " those unimportant matters, thought and emotions " and confining one's attention to the belly. Thii is purely Mr. Dobree's own invention. Nor did I suggest that writers should deal with nothing but politics, but simply that at a time like the present they should, when tackled on the subject, retire less hastily behind the flimsy defences of a vague idealism. • The truth of the matter was expressed by Andre Gide at the recent International Congress of Writers in Paris, when he said : ' For a time, at least, social questions tend to precede all others, not at all because they seem to us more interesting in themselves, but because the state of culture is strictly de- pendent on the state of Society. It is a love of culture that makes us say : as long as Society is what it is, our first thought will be to change it."—Yours, &c.,

[Mr. Dobree writes : I • am far too much in agreement with much of what Mr. Henderson says to wish to coarrel with him.

But I cannot go the whole way with him, and if he quotes at one M. Gide's utterances at the International Congress, I must retort with M. Benda's at the same Congress, where he pointed Out that the virtue of literature often lay precisely in keeping .aloof from immediacies. I must apologize if I rashly accused 11/' Henderson of unfamiliarity with his subject ; but I submit that remarks such as the following lead to that suppo- sition :

" But with the turn of the century, John Donne . . , Sir Thomas Browne . . Webster and Tournour. . • • • • The growth of trade and capitalism under Queen Anne produced liWraturo whose distinguishing quality was materialism and the

• good sense' of bourgeois decency. English writers, their country now already surpassing the technical and productive level of the Romans, felt themselves to . have entered upon a new Augustan Age. Dryden and Pope re-translated Virgil and Homer according to tho.polito manners of the day as extolled by Steele and Addison 'a The -Taller and The 'Spectator."

The last paragraph is extremely misleading, especially as there is no other mention of Dryden throughout the book.

• That Mr. Henderson should repeat the old .bourgeois judge- 'pent on Chesterfield after editing his letters only fills me with Kill greater astonishment. I confess that .I am unrepentant about sociology : Mr. Henderson refers to " the essential truth that the conception of culture as a superstructure depen- dent upon the organization of society . . ." Is not this to make the study of ,literature a sub-department of sociology ? I must also confess that on looking through Mr. Henderson's book again, I still get the impression that the only literature which counts for him is that which deals with men's physical strivings.(" the belly ") ; and that literature which is concerned with people who, luckily, do not have to think about this all the time, is of lesser value. This, however, does not prevent My regarding his book as a stimulating and admirable presen- tation of a certain point of view.]