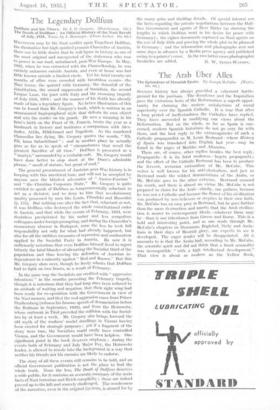 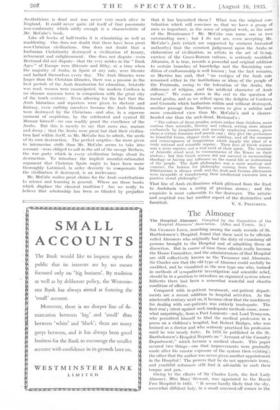 The Splendour of Moorish Spain. By Joseph McCabe. (Watts. 10s. 6(1.) SPANISH history has always provided a vehement battle:- ground for the partisan. -The decadence and the Inquisition gave the victorious heirs of the Reformation a superb oppor- tunity for .claiming the austere satisfactions of. moral superiority over the Spanish Catholic. , It is true that after a long period of ineffectualness the Catholics have .replied, They have succeeded in modifying our views about the Reformation. But on the whole, as far as Spain is con:. corned, modern Spanish historians do not go very far with them, and the best, reply to the e.xtravagancies of such a Catholic propagandist as M. Louis Bertrand—whose History of Spain was translated into English last year—may be found in the pages of Martins and Altamira.

There arc, of course, other replies besides the best reply. Propaganda—it is its fatal weakness—begets propaganda ; and the effect of the Catholic Bertrand has been to produce the fervent, sectarian rationalism of Mr. McCabe. This writer is well known for his anti-clericalism, and just as Bertrand made the wildest denunciations of the Arabs, so Mr. McCabe goes to the other extreme. Bertrand aroused his wrath, and there is almost no virtue Mr. McCabe is not prepared to claim for the Arab—chiefly, one gathers, because he was not a Catholic and because the flower of his civilization was produced by non-believers or sceptics in their own faith. Mr. McCabe has an easy prey in Bertrand, but he goes further than the mere destruction and asserts that the Arab civiliza- tion is nearer to contemporary ideals—whatever these may be—than is our inheritance from Greece and Rome. This is a bold and interesting point, and as one reads through Mr. McCabe's chapters on Damascus, Baghdad, Sicily and Anda- lusia in their days of Moorish glory, one expects to see , it developed. The eager reader will be disappointed. All it amounts to is that the Arabs had, according to Mr. McCabe, the scientific spirit and did not think that a frank sensuality was incompatible " with a high intellectual development." That view is about as modern as the Yellow Book,

Aestheticism is dead and was never very much alive in England. It could never quite rid itself of that passionate non-conformity which oddly enough is a characteristic of Mr. McCabe's book.

Like all books of half-truths it is stimulating • as well as maddening. One does not doubt that there have been great non-Christian civilizations. One does not doubt that a barbarian Christianity destroyed . a civilization of luxury, refinement and enlightenment. One does not dispute—even Bertrand did not dispute—that the very nobles in the " Dark Ages " of Europe were illiterate and filthy, at a time when the majority of Arabs, in Spain at any rate, were literate and bathed themselves every day. The Arab libraries were larger than the Christian libraries, there was a passion in the best periods of the Arab domination for education, Aristotle was read, women were emancipated, the modern. Cordova is an obscure museum town in comparison with the great city Of the tenth century. Even allowing for the fact that the Arab historians and reporters were given to rhetoric and fantasy, even curbing ourselves because the Arab libraries were destroyed by the Christians—and also, in a supreme moment of scepticism, by the celebrated and cynical El Mansur himself—we can readily grant the excellence of the Arabs. But this is merely to say that races rise, mature and decay ; that the Arabs were great but that their civiliza- tion had within itself, as Mr. McCabe has to admit, the seeds of its own destruction. lice perfect sceptics—far more given to internecine strife than Mr. McCabe seems to take into account—were obliged to call in the aid of the savage Berbers, the war party which in every civilization brings about its destruction. To introduce the implicit moralist-rationalist argument that Christian Spain ought to have been more thoroughly Latinized, in order decently to compensate for the civilization it destroyed, is an irrelevance.

Mr. McCabe makes great claims for the Arab contributions to science and learning in general. Where are those books Which displace the classical tradition ? Are we really to believe that scholarship has been so blinded by prejudice that it has boycotted them ? What was the original con- tribution which will convince us that we have a group of men as important, in the sense of original work, as the men

of the Renaissance ? Mr. McCabe can name one or two outstanding men ; but I do not see, even accepting Mr. McCabe's facts (which are supported by eminent historical

authority) that the common judgement upon the Arabs as • elaborators of civilization, as artists in the art of living, carriers of the Greco-Roman culture, is seriously modified. Altamira, it is true, records a powerful and original addition to certain branches of knowledge and the flourishing con- dition of craftsmanship is well known ; but the fact remains, as Martins has said, that " no vestiges of the Arab rule remained either in the institutions or ideas of the. people of

the • Peninsula, owing to the toleration of, the Arabs; the difference of religion, and the artificial character of Arab

culture." We come down in the end to the question of racial genius, and as we reflect upon the delights of Cordova

and Granada which 'barbarism, within and without destroyed, unother passage from Martins seems to give a subtler and

more considered view than Mr. McCabe's and a clearer- headed one than the arch-fiend, Bertrand's :

" The'eultUre of those peoples, artists rather than thinkers, more curious than scientific, literary and refined, setting store almost exclusively by imagination and scarcely employing reason, gives them a certain feminine and puerile cast ; they give the preference to beautiful forms, elegant style or subtlety, and all the excesses and extravagances of imagination which supply the place of a truly rational and scientific inquiry. Their love of Greek science was, a more caprice, not a real.need of their spirit. The treatises of Aristotle stood next to commentaries of the Koran on their shelves ; but this Greek science did not succeed in surmounting theology or: having any influence on the moral life or institutions of the people. The Arab philosopher was a mere amateur and courtier, the fashion for philosophy coming from the throne. Dilettantism is always weak and the Arab and Persian dilettantes were incapable of transforming their intellectual exercises into a positive moral philosophy."

That line of Arab civilizations which glittered from the East to Andalusia was a string of precious stones ; and the exquisite is most vulnerable to the destroyer. The artistic and sceptical was bid another aspect of the destructive and