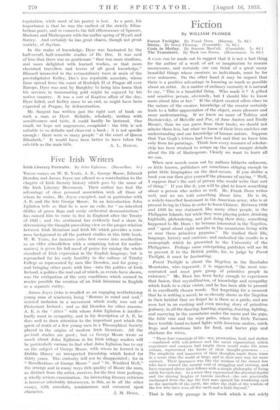 Irish Literary Portraits. By John Eglinton. (Macmillan: Ss.) Tllrsr essays on W. B. Yeats, A: E., George Moore, Edward Dowden and James Joyce are offered as a contribution to the chapter of Irish literary history which goes by the name of the Irish Literary Movement. Their author has had the advantage of close personal association with all those of whom he writes, Mr. Joyce excepted, and in particular with A. E. and the late 'George Moore: In an Introduction John Eglinton tells us that he is now an exile, for " an inherited dislike of green flags and reedy orchestral demonstrations " has caused him to come to live in England after the Treaty of 1921 ; and the sentiment has evidently had a share in determining the thought-provoking view an the proper relation between Irish literature and Irish life which provides a Com- mon background to all the portrait studies in this little book. W. B. Yeats, for instance (who first comes into recollection tts an elder schoolfellow with a surprising talent for mathe- matics), is given his full meed of praise for raising the whole Standard of Irish expression in the English language, but is reproached for his early hostility to the Culture of Trinity College as represented by men like Dowden, and for going— and bringing other poets with him—into the polities of Irish Ireland, a politics the real end of which, as events haVe shown, was the extirpation of the very conditions, which seemed to render possible the creation of an Irish literature in English as a separate entity.

James Joyce (who is recalled as an engaging aestheticising young man of nineteen), being "Roman in mind and soul," resisted inclusion in a movement which really rose out of Protestant Ireland ; and so did Dowden for other reasons. A. E. is the " sitter " with whom John Eglinton is intellec- tually most in sympathy, and in his description of A. E. he does well to draw attention -to the important part which the sanest of truth of a few young men in a Theosophical Society played in the origins of modern Irish literature. All the po: trait studies are good ; but cs George Moore wrote so much about John Eglinton in his Irish trilogy readers will be particularly curious to find what John Eglinton has to say on the subject of George Moore, with whom he formed in a Dublin library an unexpected friendship which lasted for thirty years. This curiosity will not be disappointed ; for in fs` Recollections of George Moore " and " St. Winifred Well," the strange and in many ways rich quality of Moore the man, as distinct from the artist, receives, for the first time perhaps, s wholly serious examination. An interesting literary criticism is however admirably interwoven, in this, as in all the other essays, with anecdote, reminiscence and' comment upon