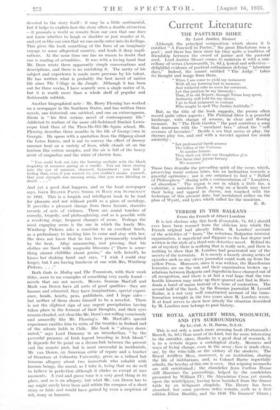 TERROR IN THE BALKANS

From the French of Albert Londres It is not obvioui why this book (Constable, 7s: Gd.) should ever have' been rescued from the oblivion into whiely, the French original had already fallen. M. Londres' account of the activities of " Lino," the notorious Bulgarian terrorist organization, is superficial and flippant to the last degree and written in the style of a third-rate detective novel. Behind its air of mystery there is nothing that is really new, and there is nothing to show that M. Londres had Penetrat6d 'any of the secrets of the terrorists. It is merely a loosely strung series of episodes such as any clever journalist could 'work up froth the yellow Press. Moreover, since it was written, the Macedonian terrorists are on the run and their organilation broken "up : relations'between Bulgaria and Jugoslavia -have changed' out of all recognition, and there is at last a real hope that the two hostile kinsmen may make up their quarrel and find in Mace- donia a bond of union instead of a bone of contention. The second half of the book, by the Russian journalist M. Leonid Zarine, is a not very well constructed account of the trans- formation wrought in the two years since M.' Londrei wrote. It at least serves to show how utterly the 'situation described by M. Londres now belongs to past history.