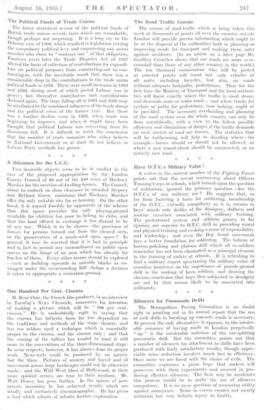 The Political Funds of Trade Unions The latest statistical review

of the political funds of British trade unions reveals facts which are remarkable, though perhaps not surprising. It is a long cry to the Osborne case of 1908, which resulted in legislation vetoing the compulsory political levy and empowering any union member who chose to " contract out " of that obligation. Fourteen years later the Trade Disputes Act of 1927 altered the basis of collection of contributions for expendi- ture Oil political purposes from contracting-out to con- tracting-in, with the inevitable result that there was a Considerable drop in the contributions to the trade union funds in 1928. There were small inereases.jn 1929 and 1930, during most of which period Labour was in power ; but thereafter contributors and contributions declined.agaim The large falling off in 1931 and 1932 may be attributed to the combined influences of the trade slump and the political crisis of the former year. But there Was a further decline even in 1933, when trade was beginning to improve, and when it might have been thought that ,political Labour was recovering from its disastrous fall. It is difficult to resist the conclusion that the number of _trade unionists who either believe in National :Government . or at least do not believe in Labour Party methods has grown.