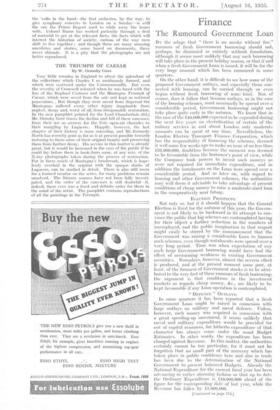 THE TRIUMPH OF CAESAR By W. Ormsby Gore Very little

remains in England to attest the splendour of the collections which Charles I so assiduously formed, and which were scattered under the Commonwealth. But even the severity of Cromwell relented when he was faced with the loss of the Raphael Cartoons and the Mantegna Triumph of Caesar, which were saved from the sale and kept as national possessions. , But though they were saved from dispersal the Mantegnas suffered every other injury imaginable from neglect, decay and, worst of all, from irresponsible restoration. In the new pamphlet printed for the Lord Chamberlain (6d.) Mr. Ormsby:Gore traces the decline and fall of these canvases, from their use as scenery for the Este open-air charades to their mangling by Laguerre. Happily, however, the last chapter of their history is more consoling, and Mr. Kennedy North has recently gone as far as is at present possible towards restoring to them some of their original beauty and preserving them from further decay. His service in this matter is already great, but &would be increased in the eyes of the public if he could lay before them in book-form some, at any rate, of the X-ray photographs taken during the process of restoration. For in them much of Mantegna's brushwork, which is hope- lessly overlaid in the original with the opaque daubs of Lagucrre, can be studied in detail. There is also still room for a learned treatise on the series, for many problems remain unsolved, The literary sources hate not, been fully investi- gated, and the order of the canvases is still doubtful—if, indeed, there ever was a fixed and definite order for them in the mind of the artist. The pamphlet contains reproductions of all the paintings in the Triumph.