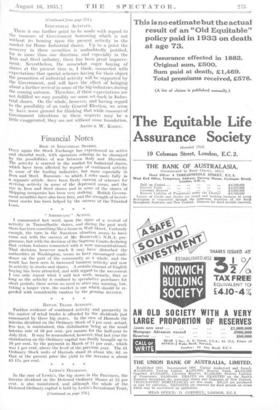 ONCE again the Stock Exchange has experienced an active and cheerful week, with operators refusing to be dismayed by the possibilities of war between Italy and Abyssinia. The activity is centred in the market for Industrial shares, which have been affected by reports of continued activity in some of the leading industries, but more especially in ,Iron and Steel. RumoursŌĆöto which I refer more fully in separate articleŌĆöhave been freely current of schemes for reviving activity in some of the depressed areas, and the rise in Iron and Steel shares and in some of the shares of Shipping companies has been very striking. British Govern.: ment securities have also been firm, and the strength of invest.; ment stocks has been helped by the success of the Trinidad Loan.