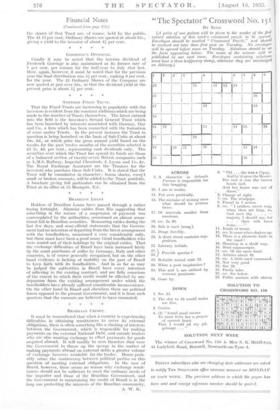 That the Fixed Trusts are increasing in popularity with the investors is evident from the constant additions which are being made to the number of Trusts themselves. - The latest entrant into the field is the Investor's Second General Trust which has been launched by interests associated with Dawnay, Day and Co., a firm which has been connected with the formation of some earlier Trusts. In the present instance the Trust in question is being launched on the basis of Sub-Unita at about 188. 6d., at which price the gross annual yield based on the results for the past twelve months of the securities selected is £5 2s. 4d. per cent., representing cash dividends only. The securities over which the Trust has spread its funds are those of a balanced section of twenty-seven British companies such as L.M.S. Railway, Imperial Chemicals, J. Lyons and Co. &c. The Royal Exchange Assurance are the Trustees for .the investors who purchase these Sub-Units. It is stated that the Trust will be cumulative in character ; bonus shares, excel:t small or broken amounts, will be added to the Trust -portfolio. A brochure giving full particulars can be obtained from the Trust at its office at 15 Moorgate, E.C.