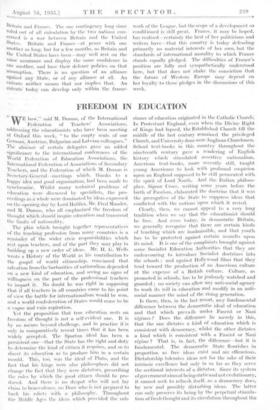 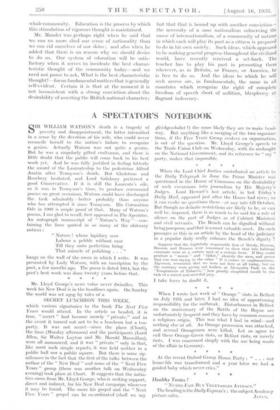 WE bow," said M. Dumas, of the International . Federation of Teachers' Associations, addressing the educationists who have been meeting pit Oxfofd this week, " to the empty seats of our Berman, Austrian, Bulgarian and Latvian colleagues." The ab§ence of' certain delegates gave an added} significance to the international conferences of the World 'Federation • of Education Associations, the International Federation of Associations of Secondary Teaeher§, and the Federation of which M. Dumas is SeeretaryGeneralmeetings which, thanks to a happy idea and good organization, had been made to synehromZe. Whilst many technical problems of education were 'discussed by specialists, the pro- ceedings as. a whole were dominated by ideas expressed on the opening day by Lord Halifax, Mr. Fred Mandel.; and M. Dumas, who all emphasiZed the freedom of thought which should inspire education and transcend the limits of nationality.

The plan which brought together representative§ of the teaching profession froM many countries is a reminder of the wider civic responsibilities which rest upon teachers, and of the part they may play in building ,up a new order of ideas. Mr. H. G. Wells Wrote a History of the World as his contribution to the gOspel of world citizenship, convinced that salvation from the barbarities of nationalism depended on a new' kind of education, and seeing no signs of Willingnelss" on the part of the professional teachers to impart' it No doubt he was right in supposing that if all teachers in all countries came to his point of view 'the battle for internationalism Would be wOn, and a world cOnfederation of States would cease to be a vague and vain aspiration. Yet the proposition that true education rests on freedOmT of 'thought is not a self-evident one. It is by no means beyond challenge, and in practice it is only in Comparatively recent times that it has been widely accepted. The Spartan ideal has been a persistent one —that the State has the right and duty to determine the kind of citizen it requires, and so to direct its education as to produce him in a certain. mould. This, too, was the ideal of 'Plato, and the fact that his kings_ were also philosopherS did not change the fact that they were dictators, prescribing the rules by which the good citizen sbOuld be pro- duced. And there is no despot Who will not lay claiM to benevolence, no Duce who is not prepared to back lil§' edicts with a philosophy. Throughout the 111iddle Ages the ideas which provided the sub-' stance of education originated in the Catholic Church.: In Protestant England, even when the Divine Right of Kings had lapsed, the Established Church till the middle of the last century remained the privileged Church, and University dons were Anglican Churchmen. School text-books in this country throughout the nineteenth century gave a rendering of English history which stimulated • assertive nationalism. American text-books, more recently still, taught young Americans to look with profound suspicion upon an England supposed to be still permeated with the spirit of Lord North. And the Italian philoso- pher, Signor CroCe, writing some years before the birth of Fascism, elaborated the doctrine that it was the prerogative of the State to suppress ideas that conflicted with the notions 'upon which it rested.

Clearly, then,' we cannot appeal to a very long tradition when we say that the educationist should be free. And even today, in democratic Britain; we generally recognize that there are certain kinds of teaching which are inadmissible, and that youth has to be protected against certain assaults upOn its mind. It is one of the complaints brought against some Socialist Education Authorities that they are endeavouring to introduce Socialist doctrines into the schools ; and against Hollywood films that they tend toward the production of an American culture at the expense of a British culture. Culture, as prothoted in schools; has to be jealously watched and guarded ; no society can ,allow any anti-social agency to work its will in education and modify in an anti7 social manner the mind of the rising generation.

Is there, then, in the last resort, any fundamental difference between the democratic ideal of education and that which prevails under Fascist or Nazi regimes ? Does the. difference lie merely in this, that the one dictates a kind of education which is consistent with democracy,' whilst the other dictates a kind which is consistent with a Fascist or Nazi regime ? That is, in fact, the difference--but it is fundamental. The democratic State. flourishes in proportion as free ideas exist and are efficacious. Dictatorship tolerates ideas not for the sake of their intrinsic excellence but only in so far as_ they serve the sectional interests of a dictator. Since its system of government aims at beingstatic and not evolutionary, it cannot seek to refresh itself, as a democracy does, by new and possibly disturbing ideas. The latter can only preserve its being by the perpetual stimula- tion of fresh thought and its circulation throughout the whole community. Education is the process by which this stimulation of vigorous thought is maintained, Mr. Mander was perhaps right when he said that we can no more shed our sense of nationality than we can rid ourselves of our skins ; and also when he added that there is no reason why we should desire to do so. Our system of education will be satis- factory when it serves to inculcate the best charac- teristic thought of the community today—and we need not pause to ask, What is the best characteristic thought?—for on fundamental matters that is generally self-evident. Certain it is that at the moment it is not inconsistent with a strong conviction about the desirability of asserting the British national character ; but that that is bound up with another conviction—. the necessity of a sane nationalism subserving the cause of internationalism, of a community of nations in which each will play its part as a citizen is prepared to do in his own society. Such ideas, which appeared to be making general progress throughout the civilized world, have recently received a set-back. TM teacher has to play his part in promoting nevi wherever, as in Britain, or France, or America, he is free to do so. And the ideas to which he Will seek access are, in fundamentals, . the same in all countries which recognize the right of :complete freedom of speech short of sedition, blasphemy or flagrant indecency.