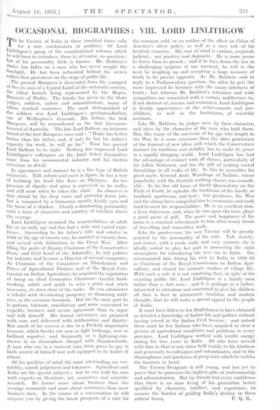 TO be Viceroy of India in these troubled times calls for a rare combination of qualities. Of Lord Linlithgow's grasp of .the constitutional reforms which Ile will have to introduce, there is,'of course, no question ; but of his personality little is known. Mr. Baldwin's choice has fallen on a man who has never sought the limelight: He has been influential behind the scenes thah 'prominent on the stage of public life. The present Marquess is descended from the youngest of the six sons of a typical Laird of the sixteenth century, the eldest branch being ; represented by the Hopes, Baronets Of Pinkie. The family has given to the State judges, soldiers, sailors and administrators, many of Whom reached eminence. The most distinguished of the soldiers was Lord Linlithgow's greatgrandfather, one of Wellington's Generals. His father, ' the first Marquess, will be remembered as the first Governor- General of Australia. The late Lord Balfour, an intimate friendof!the first Marquess, once said : " Hopie has better brains than his father, and, if only he has his father's capacity for work, he will go far." Time has proved Lord Balfour to, be right. Nothing has impressed Lord Linlithgow's colleagues on the Joint Select Committee More than his monumental industry. and his tireless attention• to detail.

In appearance and manner he is a fine type of British aristocrat. Tall, robust and erect in figure, he has a way of inclining his head like Jove on Olympus. An im- Pression of dignity and poise is conveyed as he walks, and still more when he takes the chair. An observer is first struck, by his by voice and powerful lower jaw, Ind is reassured by a humorous mouth, kindly eyes and the brow of ;a "thinker. Clearly a dominating personality with a fOrce of character and subtlety of intellect above the average. Lord Linlithgow assumed the responsibilities of adult life at an early age and has had a wide and varied expe- rience. Succeeding to his father's title and estates in 1998 at the age of twenty-one, he married at twenty-four, and served 'With distinction in the Great War. After filling the 'posts of Deputy-Chairman of the Conservative Party and Civil Lord of the Admiralty, he left politics for industry 'and became a Director of several companies. As Chairman of the Committee on Distribution and 'Prices of Agricultural Produce and of the Royal. Com- Mission On Indian Agriculture, he acquired the reputation of being an ideal Committee Chairman—tactful, hard- working, subtle and quick to seize a point and, when necessary, to steer clear of the rocks. He can administer a rebuke with devastating pungency or disarming mild- ness; as the occasion demands. But for the most part he is patient, tolerant, conciliatory and more concerned to expedite business and secure agreement than to argue and talk himself. His formal utterances are prepared with care and delivered with deliberation and dignity. But much of his success is due to a Puckish impromptu 'humour, which breaks out now as light badinage, now as brilliant :repartee, and frequently as a lightning-con- ductor in. an atmosphere charged with thunderclouds. A man who can in a moment turn from grave to gay is both master of himself and well equipped to be leader of others.

Of his qualities of mind the most outstanding are ver- tatility, sound judgement and tolerance. Agriculture and India are his special subjects; but he can hold his own with experts on literature, art, economics and scientific research. He knows more about business than the average economist and more about economies than most business Men. ' 'the course' of a conversation he will surprise' you by giving the latest prospects of a cure for the common .cold, or an outline of the effect on China of America's silver policy, as well as a racy tale of his Scottish tenantry. His cast of mind is curious, sceptical, judicial ; not positive and dogmatic. He is more prone to listen than to preach ; and if he lays down the law in a challenging epigram at one moment, he will in the next be weighing up and accepting a large measure of truth in its precise opposite. As Mr. Baldwin said in reply to a Parliamentary question, the older he gets the more impressed he becomes with the rnany-sidedness of truth ; but whereas Mr. Baldwin's tolerance and wide sympathies are associated with a certain indifference to, if not distrust of, science and economics, Lord Linlithgow is keenly appreciative of the achievements and pos- sibilities, as well as the limitations, of scientific methods. • !

Like Mr. Baldwin, he judges men by their character, and ideas by the character. of the mcn who hold them. But, like many of the survivors of his age who fought in the War, he is more conscious than the older generation of the ferment of new ideas with which the Conservative instinct for tradition and stability has to make its peace in a rapidly changing world. Lord Linlithgow has had the advantage of contact with all classes, particularly of his fellow Scotsmen, and has the gift. of making varied friendships in all walks of life. In this he resembles his great-uncle, General Andy Wauchope of Niddrie, whose popularity with the Scottish working classes was remark- able. In his fine old home at South Queensferry on the Firth of Forth, he upholds the traditions of his family as landlord, sportsman, and host ; but prudence, the War and the slump have compelled him to economize and work hard to meet his responsibilities. He is an excellent shot, a keen fisherman, and, when he can spare the time, plays a good game of golf. The peace and happiness of his home is a constant refreshment to him after weary hours of travelling and committee work. Like his predecessor, the new Viceroy will be greatly assisted by the personality of his wife. Tall, stately, and serene, with a ready smile and easy manner, she is ideally suited to play her part in promoting the right atmosphere for introducing the new era in India. She accompanied him during his visit to India in 1926-28 as Chairman of the Royal Commission on Indian Agri-. culture, and shared his intimate studies of village life. With such a wife it is not 'surprising that, in spite of his 'exacting public life, Lord Linlithgow is a family mail rather than a club man ; and it is perhaps as a father, interested in education and concerned to give his children all that is best in aristocratic tradition and modern thought, that he will make a special appeal to the people of India.'

It must haVe fallen to few Englishmen to have obtained so detailed a knowledge of Indian life and politics without having served in the Indian Civil Service ; and indeed there must be few Indians who have acquired so clear a picture of agricultural conditions and problems in every 'province. Lord Linlithgow worked with terrific energy during his two years' in India. All who have served with him in that or any other field testify to his kindness and generosity to colleagues and subordinates, and to the thoroughness and quickness of grasp with which he tackles the business in hand.

The Viceroy-Designate is • still young, and has yet to prove that he possesses the highest giftS of statesmanship and administration. But his friends feel every confidence that there 'is no man living of his generation better qualified by character, 'intellect, and experience, to assume the burden of guiding India's 'destiny in these