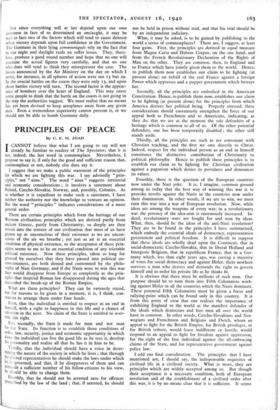 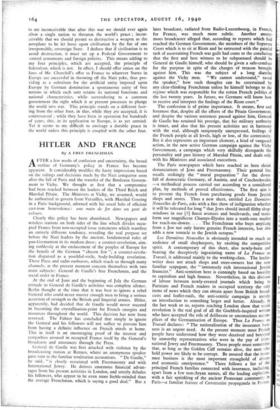 CANNOT believe that what I am going to say will not

already be familiar to readers of The Spectator; that it is not, indeed, the last word in commonplace. Nevertheless, I propose to say it, if only for the good and sufficient reason that, commonplace or not, nobody else does say it.

I suggest that we make a public statement of the principles for which we are fighting this war. I say advisedly " prin- ciples," not " aims." The word " aims " suggests territorial and economic considerations ; it involves a statement about Poland, Czecho-Slovakia, Norway, and, possibly, Colonies. As to whether it is expedient to make such a statement, I have neither the authority nor the knowledge to venture an opinion. But the word " principles " indicates considerations of a more general order.

There are certain principles which form the heritage of our Western civilisation, principles which are derived partly from ancient Greece, partly from Christianity; so deeply are they woven into the texture of our civilisation that most of us have grown up as unconscious of their existence as we are uncon- scious of the air we breathe ; yet just as air is an essential condition of physical existence, so the acceptance of these prin- ciples seems to me to be an essential condition of any tolerable political existence. Now these principles, taken so long for granted by ourselves that they have passed into political un- consciousness, are both denied and contemned by the philo- sophy of Nazi Germany, and if the Nazis were to win this war they would disappear from Europe as completely as the prin- ciples that inspired Roman law disappeared during the ages that succeeded the break-up of the Roman Empire.

What are these principles? They can be variously stated, but for reasons to be given in a moment, it is, I think, con- venient to arrange them under four heads.

First, that the individual is entitled to respect as an end in himself, with a right to happiness in this life and a chance of salvation in the next. No claim of the State is entitled to over- ride this right.

For, secondly, the State is made for man and not man for the State. Its function is to establish those conditions of order, law, security, justice and economic opportunity in which alone the individual can live the good life as he sees it, develop his personality and realise all that he has it in him to be.

Thirdly, that the individual should have a voice in deter- nlinug the nature of the society in which he lives ; that through his elected representatives he should make the laws under which he is govemed, and that, if he disapproves of them and can Persuade a sufficient number of his fellow-citizens to his view, he should be able to change them. Fourthly, that he should not be arrested save for offences Prescribed by the law of the land ; that, if arrested, he should not be held in prison without trial, and that his trial should be by an independent judiciary.

What, it may be asked, is to be gained by publishing to the world a series of commonplaces? There are, I suggest, at least four gains. First, the principles are derived in equal measure from Magna Carta and Habeas Corpus, on the one hand, and from the French Revolutionary Declaration of the Rights of Man on the other. They are common, then, to England and to France which have jointly given them to the world. Hence, to publish them now establishes our claim to be fighting (at present alone) on behalf of the real France against a foreign Power which oppresses and a puppet government which betrays her.

Secondly, all the principles are embodied in the American Constitution. Hence, to publish them now, establishes our claim to be fighting (at present alone) for the principles from which America derives her political being. Properly stressed, these considerations should enormously strengthen the force of our appeal both to Frenchmen and to Americans, indicating, as they do, that we are at the moment the sole defenders of a heritage which is common to all of us. Of the other potential defenders, one has been temporarily disabled ; the other still stands aside.

Thirdly, all the principles are such as are consonant with Christian teaching, and the first we owe directly to Christ. Indeed, respect for the individual person as an end in himself constitutes the distinctive contribution of Christianity to political philosophy. Hence to publish these principles is to establish our claim to be fighting for Christian civilisation against a paganism which denies its postulates and denounces its values.

Fourthly, there is the question of the European countries now under the Nazi yoke. It is, I imagine, common ground among us today that the best way of winning this war is to provoke revolts against the Nazis in the countries now under their domination. In other words, if we are to win, we must turn this war into a war of European revolution. Now, while ideas are among the weapons of every war, in a revolutionary war the potency of the idea-arm is enormously increased. In- deed, revolutionary wars are fought for and won by ideas. What, then, should be the ideas of the anti-Nazi revolution? They are to be foUnd in the principles I have summarised, which embody the essential ideals of democracy, representative government and political freedom. It is difficult to suppose that these ideals are wholly dead upon the Continent, that in social-democratic Czecho-Slovakia, that in liberal Holland and bourgeois Belgium, that in republican France, that in a Ger- many which, less than eight years ago, was casting a majority of votes for social democracy and against Hitler, there nowhere survives a man who desires and demands the right to govern himself and to order his private life as he thinks fit.

It is obvious that there must be millions of such men. Our purpose should be to turn them into Fifth Columnists work- ing against Hitler in all the countries which the Nazis dominate. These potential Fifth Columnists must be given a focus and rallying-point which can be found only in this country. It is from this point of view that one realises the importance of exhibiting England to the world as the manifest defender of the ideals which democrats and free men all over the world have in common. In other words, Czecho-Slovakians and Nor- wegians and Frenchmen and Belgians and Dutch, whom an appeal to fight for the British Empire, for British privileges, or for British tribute, would leave indifferent or hostile, would respond to an appeal to fight for freedom against oppression, for the right of the free individual against the all-embracing claims of the State, and for representative government against police law.

I add one final consideration. The principles that I have mentioned are, I should say, the indispensable requisites of civilised life in a civilised society. What is more, they are principles which are widely accepted among us. But though their acceptance is a necessary condition, both of European revolution and of the establishment of a civilised order after this war, it is by no means clear that it is sufficient. It seems to me inconceivable that after this war we should ever again allow a single nation to threaten the world's peace ; incon- ceivable that we should permit so destructive a weapon as the aeroplane to be let loose upon civilisation by the fiat of one irresponsible, sovereign State. I deduce that if civilisation is to avoid destruction, it must set up a Federal Government to control armaments and foreign policies. This means adding to my four principles, which are accepted, the principle of federalism, which is not. In effect, I should offer union on the lines of Mr. Churchill's offer to France to whatever States in Europe are successful in throwing off the Nazi yoke, thus pro- viding as a substitute for the artificial unity imposed upon Europe by German domination a spontaneous unity of free nations in which each unit retains its national functions and national characteristics, while surrendering to a common government the right which it at present possesses to plunge the world into war. This principle stands on a different foot- ing from the other four, in that, while they are accepted, it is controversial ; while they have been in operation for hundreds of years, this, in its application to Europe, is as yet untried. Yet it seems to me difficult to envisage a durable peace in the world unless this principle is coupled with the other four.