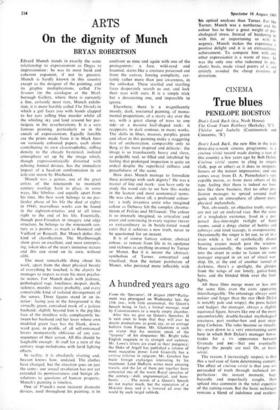 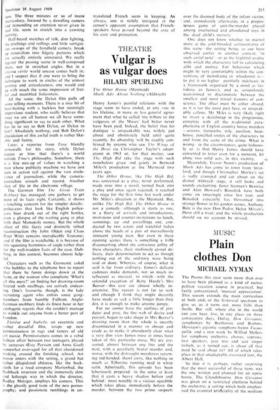 Don't Look Back, the new film in the IcA's three-day-a-week cinema programme, is a cinema verite record made during a tour of this country a few years ago by Bob Dylan. Cinema verite seems to cling to singers (folk, pop or other) as it does to strippers, boxers or the noisier impresarios; and one comes away from D. A. Pennebaker's very capable movie, as from most others of the 'type, feeling that there is indeed no busi- ness like show business, that no other pro- fession manages to spread around itself quite such an atmosphere of almost meta- physical melancholy.

Not, obviously, an objective truth; singers are not yet an enslaved race. But the sense of a troglodyte existence, lived in a per- petual day-into-night twilight of hotel rooms, amid a dingy clutter of bottles and ashtrays and tired teacups, is overpowering. Occasionally the singer is let out, to sit in a train while a lot of symbolically dismal housing estates march past the window. More occasionally, the camera lopes out into the street in order to fasten on some teenager engaged in an act of ritual wor- ship. Or, at the end of another tunnel of darkness, there's a spotlight, the glimpse from the wings of our lonely, guitar-hung hero, and the blinded blink over the foot- lights.

All these films merge more or less into the same film, even the casts appearing interchangeable. The entourage always seem noisier and larger than the star (Bob Dylan is notably pale and wispy); the press batten and badger; the manager, always a slightly equivocal figure, hovers like one of the more uncomfortably double-headed mythological creatures, part mother-hen and part snap- ping Cerberus. The roles become so ritualis- tic—even down to a very entertaining scene here in which Bob Dylan's manager horse- trades for a Iv appearance between Granada and BBC—that one eventually forgets the people are real. Or, at least, virile.

The reason, I increasingly suspect, is that this a real case of form determining content.

The effect of cinema verite is that you are persuaded of truth through technical im- perfection : the instant moment, hap- hazardly and imperfectly caught, then spliced into comment in the total expertise of the cutting-room. But the basic technique remains a blend of indolence and restless-

lies& The three minutes or so of inane inarticulacy, focused-by a dawdling camera and demanding an attention never given in real life, seem to stretch into a yawning eternity.

Half-heard snatches of talk, dim lighting, the pitchings and rollings and little vertigin- ous swoops of the handheld camera, break up naturalism into fidgety patterns which are actually entirely unnatural. We really register the passing scene in well-composed

shots, not in snatched angles. But in a cinema virile world unease comes built in;

and I suspect that if one were to bring the technique to work in circles of the utmost serenity and articulateness, one would end up with much the same impression of fret- ful and mumbled listlessness.

All the same, the Dylan film pulls off some telling moments. There is a nice bit of bear-baiting with a luckless but seemingly impervious student. who really believes that since we are all human we all have some- thing significant to say to each other. What has he to say to Bob Dylan, or Dylan to him? Absolutely nothing; and Bob Dylan's elucidation of this awful truth is rather like- able and funny.

Later, a reporter from Time blandly stonewalls for his story, while Dylan argues at him that there's a world outside Time's philosophy. Somehow, there is a fine mix-up of values in watching a man whose publicity machine we have just seen in action rail against the vast irrele- vance of journalism, while the camera- journalists crouch and record. Another slice of life in the electronic village.

The German film The Great Train Robbery has managed, one gathers, to get most of its facts right. Certainly, it shows a touching concern for the simpler details: police-cars that look like English police- cars, beer drunk out of the right bottles, even a glimpse of the waiting gang at play with their Monopoly money. But the whole effect of this fuzzy and distinctly stilted reconstruction (by John Olden and Claus Peter Witt) remains ineradicably Teutonic; and if the film is watchable, it is because of this squinting barminess of angle rather than for the well-trodden facts of the case. Dub- bing, in this context, becomes almost help- ful.

Characters such as the Germanic yokel who hobbles to the telephone box to report that there be funny doings down at the farm, or the woman who complains 'What's all this mess?' on finding her drawing-room littered with mailbags, are actively endear- ing. One's favourite, though, is the lady recruiting agent who enlists some gang- members from humble Fulham. Anglo- German snobbery finds its finest hour in her apologetic regrets that she couldn't manage to winkle out anyone from a better part of London.

Therese and Isahelle, an eccentric and rather dreadful film, wraps up new permissiveness in rags and tatters of old art movie. Permissiveness comes in a rabid lesbian affair between two teenagers, played by actresses (Essy Persson and Anna Gael) somewhat over-aged for all that abandoned frisking around the finishing school. Art movie enters with the setting, a grand but rather dilapidated château, like the back- cloth for a road company Marienbad, the flashback structure and the immensely slow and lethargic way in which the director, Radley Metzger, employs his camera. This is the ghastly good taste of the new porno- graphy; and passionate ramblings in un- translated French seem in keeping. As always, one is mildly intrigued at the censor's apparent assumption that French- speakers have passed beyond the area of his care and protection.