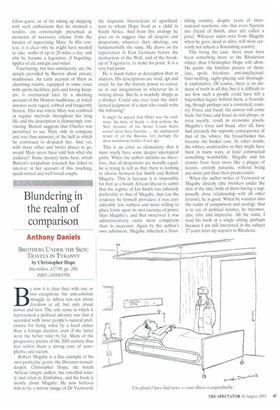 Blundering in the realm of comparison

BROTHERS UNDER THE SKIN: TRAVELS IN TYRANNY by Christopher Hope Macmillan, £17.99, pp. 288, ISBN 1405005556 By now it is clear that, with one or two exceptions, the anti-colonial struggle in Africa was not about freedom at all, but only about power and loot. The sole sense in which it represented a political advance was that it accorded with most people's natural preference for being ruled by a local rather than a foreign dictator, even if the latter were the better ruler by far. Many of the progressive pieties of the 20th century thus had within them a strong core of xenophobia and racism.

Robert Mugabe is a fine example of his own particular genre: the liberator-turneddespot. Christopher Hope, the South African émigré author, has travelled widely and often in Zimbabwe, and his book is mostly about Mugabe. He now believes him to be a mirror image of Dr Verwoerd, the dogmatic theoretician of apartheid, next to whom Hope lived as a child in South Africa. And from this analogy he goes on to suggest that all despots and despotisms, whatever their ideology, are fundamentally the same. He draws on his experiences in East Germany before the destruction of the Wall, and of the breakup of Yugoslavia, to make his point. It is a very had point.

He is much better at description than at analysis. His descriptions are vivid, apt and exact: he has the literary power to convey us in our imagination to wherever he is writing about. But he is woefully sloppy as a thinker. Could one ever trust the intellectual judgment of a man who could write the following?

It might be argued that Hitler was the soulmate, the twin, of Stalin — that without the Nazi invasion of the Soviet Union Stalin

would never have become the undisputed tyrant of all the Russias, [or] perhaps the most murderous leader of our age.

This is an error so elementary that it must surely have some deeper ideological point. When the author informs us, therefore, that all despotisms are morally equal, he is trying to tell us that there is nothing to choose between Ian Smith and Robert Mugabe. This is because it is impossible for him as a South African liberal to admit that the regime of Ian Smith was infinitely preferable to that of Mugabe, that (on the evidence he himself provides) it was considerably less ruthless and more willing to place limits upon its own exercise of power than Mugabe's, and that moreover it was administratively vastly more competent than its successor. Again by the author's own admission, Mugabe inherited a flour

ishing country, despite years of international sanctions, one that even Nyerere (no friend of Smith, after all) called a jewel. Whoever takes over from Mugabe when he goes, dead or alive, will most certainly not inherit a flourishing country.

This being the case, there must have been something more to the Rhodesian whites than Christopher Hope will allow, He paints the familiar picture of them: lazy, spoilt, frivolous, anti-intellectual, beer-swilling, rugby-playing and thoroughly exploitative. Of course, there is an element of truth in all this, but it is difficult to see how such a people could have left a bejewelled legacy behind them, a flourishing, though perhaps not a contented, country. Force and fraud, the answer will come back: but force and fraud do not always, or even usually, result in economic jewels. Mugabe's force and fraud, after all, have had precisely the opposite consequence of that of the whites: the bread-basket has become the basket case. In other words, the whites, unattractive as they might have been in many ways, at least constructed something worthwhile. Mugabe and his cronies have been more like a plague of locusts, entirely parasitic, without being any more just than their predecessors.

When the author writes of Verwoerd or Mugabe directly (the brothers under the skin of the title, both of them having a supposedly close relationship with all other tyrants), he is good. When he wanders into the realm of comparison and analogy, that is to say of political science, he becomes, alas, trite and imprecise. All the same, I read his book at a single sitting, perhaps because I am still interested in the subject 27 years after my sojourn in Rhodesia,