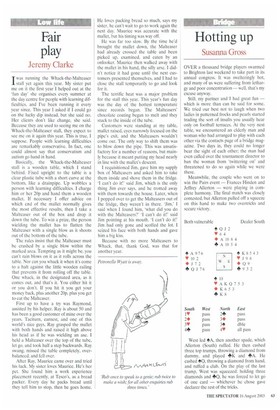 Iwas running the Whack-the-Malteaser stall yet again this year. My sister put me on it the first year I helped out at the 'fun day' she organises every summer at the day centre for people with learning difficulties, and I've been running it every year since. This year I asked if I could go on the lucky dip instead, but she said no. Her clients don't like change, she said. Because they are used to seeing me on the Whack-the-Malteaser stall, they expect to see me on it again this year. This is true, I suppose. People with learning difficulties are remarkably conservative. In fact, one could almost say that conservatism and autism go hand in hand.

Basically, the Whack-the-Malteaser stall is a wooden table, which I stand behind. Fixed upright to the table is a clear plastic tube with a short curve at the bottom, like a drainpipe. Up wobbles a person with learning difficulties. I charge him or her 20p and hand them a wooden mallet. If necessary I offer advice on which end of the mallet normally gives the most effective results, then I take a Malteaser out of the box and drop it down the tube. To win a prize, the person wielding the mallet has to flatten the Malteaser with a single blow as it shoots out of the bottom of the tube.

The rules insist that the Malteaser must be crushed by a single blow within the marked area. Tempting as it might be, you can't rain blows on it as it rolls across the table. Nor can you whack it when it's come to a halt against the little wooden railing that prevents it from rolling off the table. One whack, in the designated area, as it comes out, and that's it, You either hit it or you don't. If you hit it you get your money back, plus another 20p, plus you get to eat the Malteaser.

First up to have a try was Raymond, assisted by his helper. Ray is about 50 and has been a good customer of mine over the years. Taciturn, earnest, and one of this world's nice guys. Ray grasped the mallet with both hands and raised it high above his head as if he was wielding an axe. I held a Malteaser over the top of the tube, let go, and took half a step backwards. Ray swung, missed the table completely, overbalanced, and fell over.

After Ray, Maurice came over and tried his luck. My sister loves Maurice. He's her pet. She found him a work experience placement recently, at Tesco's, as a bread packer. Every day he packs bread until they tell him to stop, then he goes home. He loves packing bread so much, says my sister, he can't wait to go to work again the next day. Maurice was accurate with the mallet, but his timing was way off.

He was far too slow. By the time he'd brought the mallet down, the Malteaser had already crossed the table and been picked up, examined, and eaten by an onlooker. Maurice then walked away with the mallet in his hand, the silly arse. I didn't notice it had gone until the next customers presented themselves, and I had to close the stall temporarily to go and look for it.

The terrific heat was a major problem for the stall this year. This year's fun day was the day of the hottest temperature since records began. The Malteasers' chocolate coating began to melt and they stuck to the inside of the tube.

Customers were standing at my table, mallet raised, eyes narrowly focused on the pipe's exit, and the Malteasers wouldn't come out. The only way to shift them was to blow down the pipe. This was unsatisfactory for a number of reasons, but mainly because it meant putting my head nearly in line with the mallet's descent.

I requisitioned Jim, gave him my supply box of Malteasers and asked him to take them inside and shove them in the fridge. 'I can't do it!' said Jim, which is the only thing Jim ever says, and he trotted away with them towards the house. Later, when I popped over to get the Malteasers out of the fridge, they weren't in there. 'Jim,' I said when I found him, 'what did you do with the Malteasers?' I can't do it!' said Jim pointing at his mouth. 'I can't do it!' Jim had only gone and scoffed the lot. I seized his face with both hands and gave him a big kiss.

Because with no more Malteasers to Whack, that, thank God, was that for another year.

Petronella Wyatt is away.