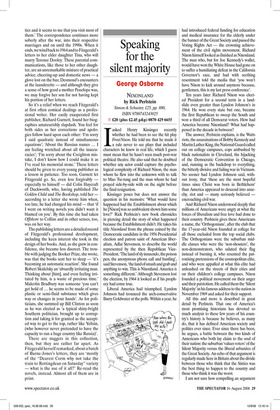 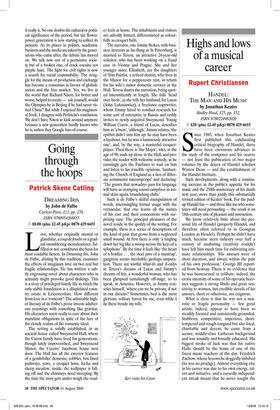 Speaking for the silent majority

NIxoNLAND by Rick Perlstein Simon & Schuster, £25, pp. 880, ISBN 9780743243025 ✆ £20 (plus £2.45 p&p) 0870 429 6655 Iasked Henry Kissinger recently whether he had been to see the hit play Frost/Nixon. He told me that he made it a rule never to see plays that included characters he knew in real life, which I guess must mean that he hasn’t seen much post-war political theatre. He also said that he doubted whether any actor could capture the psychological complexity of Richard Nixon, the man whom he flew into the unknown with to talk to Mao Tse-tung and the man whom he had prayed side-by-side with on the night before the final resignation.

Kissinger poses but does not answer the question in his memoirs: ‘What would have happened had the Establishment about which he [Nixon] was so ambivalent shown him some love?’ Rick Perlstein’s new book chronicles in piercing detail the story of what happened because the Establishment didn’t. He takes his title Nixonland from the phrase coined by the Democratic candidate in the 1956 Presidential election and patron saint of American liberalism, Adlai Stevenson, to describe the world represented by the then Republican VicePresident. ‘The land of sly innuendo, the poison pen, the anonymous phone call and hustling’, said Stevenson, ‘the land of smash and grab and anything to win. This is Nixonland. America is something different.’ Although Stevenson lost the election, by 1964 it looked as if his prophecy had come true.

Liberal America had triumphed. Lyndon Johnson had trounced the arch-conservative Barry Goldwater at the polls. Within a year, he had introduced federal funding for education and medical insurance for the elderly under the banner of the Great Society and passed the Voting Rights Act — the crowning achievement of the civil rights movement. Richard Nixon himself looked as finished as Nixonland. The man who, but for Joe Kennedy’s wallet, would have won the White House had gone on to suffer a humiliating defeat in the California Governor’s race, and had with seething resentment told the media that ‘you won’t have Nixon to kick around anymore because, gentlemen, this is my last press conference’.

Ten years later Richard Nixon was elected President for a second term in a landslide even greater than Lyndon Johnson’s in 1964. He won every state but one, became the first Republican to sweep the South and won a third of all Democrat voters. How had America become Nixonland? What had happened in the decade in between?

The answer, Perlstein explains, is the Watts riots, the assassinations of Bobby Kennedy and Martin Luther King, the National Guard called out on college campuses, cops ambushed by black nationalists in Cleveland, the hijacking of the Democratic Convention in Chicago, and, running as the backdrop to everything, the bitterly divisive and failing war in Vietnam. No sooner had Lyndon Johnson said, without irony, that ‘these are the most hopeful times since Christ was born in Bethlehem’ than America appeared to descend into anarchy, riot and — many seriously believed — encroaching civil war.

And Richard Nixon understood deeply that millions of Americans were angry at what the forces of liberalism and free love had done to their country. Perlstein gives these Americans a name, the ‘Orthogonians’, after the club that the 17-year-old Nixon founded at college for all those excluded from the top social clubs. The Orthogonians were the suburban middle classes who were the ‘non-shouters’, the non-demonstrators, who saluted their flag instead of burning it, who resented the patronising pretensions of the cosmopolitan elite, and who were appalled at what this elite had unleashed on the streets of their cities and on their children’s college campuses. Nixon founded a political movement on their anger and their patriotism. He called them the ‘Silent Majority’ in his famous address to the nation in November 1969 and asked for their support.

All this and more is described in great detail by Perlstein. That one of America’s most promising historians has devoted so much analysis to these few years of his country’s history is because he believes, as many do, that it has defined American society and politics ever since. Ever since there has been, he argues, a battle between the two kinds of Americans who both lay claim to the soul of their nation: the suburban ‘values voters’ of the Silent Majority versus the liberal urbanites of the Great Society. An echo of that argument is regularly made here in Britain about the divide between those who think that the Sixties was the best thing to happen to the country and those who think it was the worst.

I am not sure how compelling an argument it really is. No one doubts the cultural or political significance of the period, but the flowerpower generation is now starting to collect its pension. As its places in politics, academia, business and the media are taken by the generations who came after, the debate has moved on. We talk now not of a permissive society but of a broken one, of crack cocaine not purple haze. The fight for civil rights is now a search for social responsibility. The struggle for the means of production and exchange has become a consensus in favour of globalisation and the free market. Yes, we live in the world that Richard Nixon, for better and worse, helped to create — ask yourself, would the Olympics be in Beijing if he had never visited China? But while I enjoyed his magisterial book, I disagree with Perlstein’s conclusion. We don’t have Nixon to kick around anymore because a new generation hardly knows who he is, unless they Google him of course.