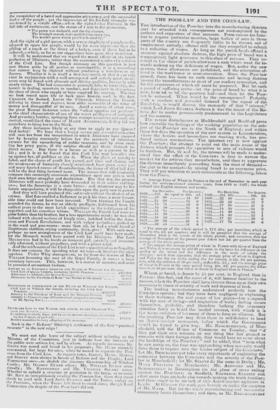 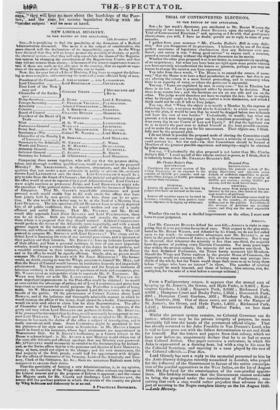 THE POOR-LAW AND THE CORN-LAW.

THE introduction of the Poor-law into the manufacturing districts may be attended with consequences not contemplated by the authors and supporters of that measure. From causes too fami- liar to require particular mention, large bodies of men in those parts of the country are frequently liable to be thrown out of employment entirely; oftener still are they compelled to submit to a reduction of wages. As lung as the parish-funds offered a resource against absolute distress, the high price of bread was a ceniparatively light grievance to this class of persons. They re- ceived in the shape of parish-allowance a sum which went far to- wards making up the deficiency of wages. But, under the new system, these allowances are prohibited, and the alternative of- fered is the workhouse or semi-starvation. Since the Poor-law passed, there has been no such extensive and lasting distress among the manufacturers: as most of our readers remember, and fur the recurrence of which all must be prepared. But let such a period of suffering arrive—let the price of bread be what it is now, from 8d. to 9d. the qttartern loaf—and then let the Poor- law be enforced. What would be the consequence? Probably such a resolute and powerful demand for the repeal of the Breed-tax, as would destroy the monopoly of that " interest," uN hi& Lord JOHN RUSSELL declares it was the intent of the Re- form Act to render permanently predominant in the Legislature and the country.

Tire recent disturbances at Huddersfield and Bradford prove how excitable the feelings of the working population on the sub- ject of the Poor-law are in time North of England; and within heee few clays the operation of the new system in Leicestershire, Where the hosiers and lacemakers are wanting work, has pro- duced serious cutumotions. The ignorant cry is now against

the Poor-law ; the attempt to point out the main cause of the distress which prompts the operatives to acts of violence would

be fruitless. But, by and by, the masses will be made to under-

stand that the effect of the Corn-laws is first to narrow the market fur the articles they manufacture, and then to aggravate

the distress immediately proceeding from the want of demand— the glut in time market—by raising bread to an enormous price. They will pay attention to such statements as the following, taken from tie Times.

" Average Price of Wheat in France at the end of November in each year duriug the tindelnientiontrI nineteen years, from 1819 to 1827; the whole reduced into English measure and money.

Per Hectolitre. Per Quarter.

Wheat, or bread, is dearer by 55 per cent. in England than in France : this fact, and the cause of it, will become familiar to the masses, when the Poor-law shall have thrown them upon their own resources in times of scarcity of work and dearness of food.

The leading manufacturers understand perfectly how the Corn-laws operate; but they have been negligent hi explaining to their workmen the real cause of low prices—low compared with the cost of living—anti stagnation of trade; feeling secure themselves, probablt, and therefore lacking the necessary stimulus fairly to beard the landed interest, with which it is the mean ambition of too many of them to form an alliance. But the pinching Poor-law may drive them in self-defence to head an Anti-Corn-law movement, before which the Government would be forced to give way. Mr. BR0CKLgHebRST, of Mac- clesfield, told the House of Commons on Tuesday, that "if' they put their own artisans on any thing like fair ground to compete with their foreign rivals, they would hear no re sre about the hardships of the Poor-law ; " and he added, that "from what lie saw going on, the time was approaching when acct ssity would drive them to inquire into the tender subject of the Corn-laws." Let Mr. BeocKeenuese take every opportunity of explaining the connexion between the Corn-laws and the severity of the Poor- law in Macclesfield : let Mr. SrmitTrr do the same in Derby ; Mr. Mane PHILLIPS in Manchester; Mr. ATTWOOD and Mr. Sen01.keie1-ia in Birmingham (in the place of mere railing aettinet the Poor-law): in Sheffield, EBENEZER ELLIOTT can effect more than ant body else towards making the truth familiar; and there eueht to be no lack of able Anti-Corn-law agitators in Leeds. At Glaegow the work 'gees bravely on under' the auspices of Mr. WEIR. But let the whole manufacturing and mercantile community bestir themselves; and then, as Mr. ilitociii-kail:RaT Fay's, " they, Win, near PO. more aho-tit the hardships of the Poor- law," and the Lime:Inc beriolis legislative dealing' With the "tender subject "- will be Dear ut band.