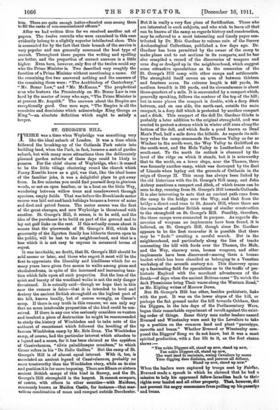 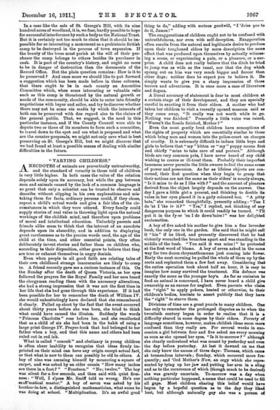 THERE was a time when Weybridge was something very

like the ideal suburb of London. It was a, time which followed the breaking-up of the Oatlands Park estate into building land, when the Park, in fact, became a sort of garden suburb, but with many more attractions than the deliberately planned garden suburbs of these days could be likely to possess. For the chief charm of Weybridge, whes it ceased to be the little village clustering round the church which Fanny Kemble knew as a girl, was that, like the ideal home of the familiar joke, it was a delightful place to get away from. In five minutes you could find yourself deep in glorious woods, or out on open heather, or in a boat on the little Wey, wandering between willow trees and meadowsweet through spacious, empty fields. That was before the Brooklands motor course was laid out and bank holidays became a horror of noise and dust and petrol fumes. The motor course was the first of the great changes, and now Weybridge is threatened with another. St. George's Hill, it seems, is to be sold, and the idea of the purchaser is to build on part of the ground and to lay out golf links on the rest. If this actually comes about it means that the pinewoods of St. George's Hill, which the generosity of the Egerton family has hitherto thrown open to the public, will be lost to the neighbourhood, and that is a lose which it is not easy to express in measured terms of regret.

It was inevitable, no doubt, that St. George's Hill should be sold sooner or later, and those who regret it most will be the first to appreciate the liberality and kindliness which for so many years have given free access to walks among pines and rhododendrons, in spite of the increased and increasing taxa- tion which falls upon all such properties. But the loss of the quiet and beauty of the woodland walks is not the only danger threatened. It is actually said—though we hope that in this case the rumour is false—that it is intended to level and destroy the ancient British stronghold on the highest part of the hill, known locally, but of course wrongly, as Cmsar's camp. If there is any truth in this rumour, we can only say that no more intolerable proposition of the kind could be con- ceived. If there is any one who seriously considers so wanton and insolent a piece of destruction he might be recommended to study the history of Wimbledon and to take note of the outburst of resentment which followed the levelling of the famous Wimbledon camp by Mr. Erie Drax. The Wimbledon camp, of course, had the particular interest which attaches to a legend and a name, for it has been claimed as the oppiduin of Cassivela.unus, " silvis paludibusque munitum," to which Cassar refers in his "De Bello Gallica" But the camp of St. George's Hill is of almost equal interest. With it, too, is associated an ancient legend of Cassivelaunus, probably no more trustworthy than the Wimbledon story, while as to size and position it is far more imposing. There are fifteen or sixteen ancient British camps of this kind in Surrey, and the St. George's Hill stronghold is the largest. It cannot compare, of course, with others in other counties—with Maidune, commonly known as Maiden Castle, for instance—that mar- vellous combination of maze and rampart outside Dorchester.

But it is really a very fine piece of fortification. Those who are interested in such subjects, and who wish to learn all that can be known of the camp as regards history and construction, may be referred to a most interesting and timely paper con- tributed by Dr. Eric Gardner to volume xxiv. of the Surrey Archwological Collections, published a few days ago. Dr. Gardner has been permitted by the owner of the camp to make plans and to cut sections in its ramparts, and he has also compiled a record of the discoveries of weapons and urns dug or dredged up in the neighbourhood, which suggest sonic attractive speculations as to the connexion of the St. George's Hill camp with other camps and settlements.

The stronghold itself covers an area of between thirteen and fourteen acres. Its extreme length is 440 yards, its medium breadth is 195 yards, and its circumference is about three-quarters of a mile. It is surrounded by a rampart which, generally speaking, follows the contour of the top of the hill; but in some places the rampart is double, with a deep ditch between, and on one side, the north-east, outside the main rampart, is a deep dell which is protected by another rampart and a ditch. This rampart of the dell Dr. Gardner thinks is probably a later addition to the original stronghold, and was erected to protect a stream which in winter still runs along the bottom of the dell, and which feeds a pond known as Dead Man's Pool, half a mile down the hillside. As regards its mili- tary value the camp commands the Thames Valley as far as Windsor to the north-west, the Wey Valley to Guildford on the south-west, and the Mole Valley to Leatherhead on the south-east. To the north its outlook is obscured by the level of the ridge on which it stands, but it is noteworthy that to the north, on a lower slope, near the Thames, there was formerly another camp, which was destroyed by the Earl of Lincoln when laying out the grounds of Oatlands in the reign of George II. This camp has always been linked by the old historians with the St. George's Hill camp, and John Aubrey mentions a rampart and ditch, of which traces can be seen to-day, running from St. George's Hill towards Oatlands. It is also interesting to note that an ancient path runs from the camp to the bridge over the Wey, and that from the bridge a direct road runs to St. Anne's Hill, where there are the remains of another British camp of similar construction to the stronghold on St. George's Hill. Possibly, therefore, the three camps were connected in purpose. As regards dis- coveries of weapons no implements have been found, it is believed, on St. George's Hill, though since Dr. Gardner appears to be the first excavator it is possible that there may be "finds " awaiting a careful search. But in the neighbourhood, and particularly along the line of tracks connecting the hill with fords over the Thames, the Mole, and the Wey, cinerary urns, bronze weapons, and other implements have been discovered—among them a bronze bucket which has been classified as belonging to a Venetian workshop of the seventh century B.C. This discovery opens up a fascinating field for speculation as to the traffic of pre- historic England with the merchant adventurers of the South—of days when the ancient Britons came " To watch the dark Pheenicians bring Their wares along the Western Road," as Mr. Kipling writes of Morrow Down.

But St. George's Hill has other, besides prehistoric, links with the past. It was on the lower slopes of the hill, or perhaps the fiat ground under the hill towards Cobham, that the Diggers, in the late days of the Parliamentary Wars, began their remarkable experiment of revolt against the exist- ing order of things. Some thirty men under leaders named Everard and Winstanley were sent by the Levellers to take up a position on the common land and plant "parsuipps, carrotts and beans." Whether Everard or Winstanley com- posed the Diggers' Song we do not know, but it was a most spirited production, with a fine lilt to it, as the first stanza shows :— " You noble Diggers all, stand up now, stand up now, You noble Diggers all, stand up now, Tho wast land to maintain, seeing Cavaliers by name Your digging does disdaine, and persons all defame, Stand up now, stand up now."

When the leaders were captured by troops sent by Fairfax, Everard made a speech in which he claimed that he had a mission to help his oppressed fellow-Israelites back to their rights over landed and all other property. That, however, did not prevent the angry commoners from pulling up his parsnips and beans.

In a case like the sale of St. George's Hill, with its nine hundred acres of woodland, it is, we fear, hardly possible to hope for successful interference by such a body as the National Trust. But it is certainly not too much to claim that it should be im- possible for so interesting a monument as a prehistoric British camp to be destroyed in the process of town expansion. If the beauty of the trees must perish at the will of their pur- chaser the camp belongs to others besides its purchaser in cash. It is part of the country's history, and ought no more to be in danger of destruction than the documents of the Record Office. But the plain question remains : How is it to be preserved ? And once more we should like to put forward a suggestion which has been made before in these columns, that there ought to be in each county an Amenities Committee which, when some interesting or valuable relic such as this camp is threatened by the natural growth or needs of the community, should be able to enter into friendly negotiations with buyer and seller, and try to discover whether there may not be some via media by which the interests of both can be preserved with due regard also to the claims of the general public. That, we suggest, is the need in this particular instance, and if the County Council were able to depute two or three of its members to form such a committee, to travel down to the spot and see what is proposed and what are the counter-proposals, we might not only save what is best preserving on SE. George's Hill, but we might discover that we had found at least a possible means of dealing with similar difficulties in the future.