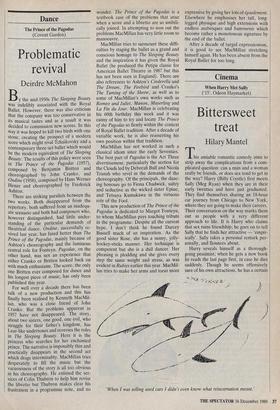 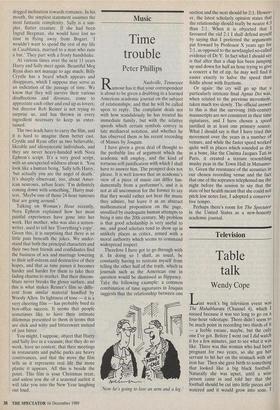 This his amiable romantic comedy aid's to strip away the complications from a com- plicated question: can a man and a woman really be friends, or does sex tend to get in the way? Harry (Billy Crystle) first meets Sally (Meg Ryan) when they are in their early twenties and have just graduated. They find themselves sharing gn 18-hour car journey from Chicago to New York, where they are going to make their careers. Their conversation on the way marks them out as people with a very different approach to life. It is Harry who claims that sex ruins friendship; he goes on to tell Sally that he finds her attractive — 'empir- ically'. Sally takes a personal remark per- sonally, and flounces about.

Harry reveals himself as a thorough- going pessimist; when he gets a new book he reads the last page first, in case he dies suddenly. Though he seems offensively sure of his own attractions, he has a certain When I was selling used cars I didn't even know what reincarnation meant.' dogged inclination towards romance. In his mouth, the simplest statement assumes the most fantastic complexity. Sally is a sim- pler, flatter creature. If she had been Ingrid Bergman, she would have lost no time in flying away from Bogart. 'I wouldn't want to spend the rest of my life in Casablanca, married to a man who runs a bar.' They part with a frosty handshake.

At various times over the next 11 years Harry and Sally meet again. Beautiful Meg Ryan does not manage to age much; Billy Crystle has a beard which appears and disappears, which I suppose may serve as an indication of the passage of time. We know that they will survive their various disaffections and divorces, come to appreciate each other and end up as lovers; but director Rob Reiner is not trying to surprise us, and has thrown in every ingredient necessary to keep us enter- tained.

The two leads have to carry the film, and it is hard to imagine them better cast. Crystle and Ryan offer us two believable, likeable and idiosyncratic individuals, and they are never heavy-handed with Nora Ephron's script. It's a very good script, with an unexpected wildness about it. 'You look like a human being,' Sally tells Harry, `but actually you are the angel of death.' It's sharply observant, too, about Amer- ican neuroses, urban fears: 'I'm definitely coming down with something,' Harry mut- ters. 'Maybe one of those 24-hour tumours that are going around.'

Talking on Woman's Hour recently. Nora Ephron explained how her most painful experiences have gone into her work. Her mother, who was also a screen- writer, used to tell her 'Everything's copy'. Given this, it is surprising that there is so little pain beneath the jokes. We under- stand that both the principal characters and their two best friends and confidantes find the business of sex and marriage lowering to their self-esteem and destructive of their hopes, and that as time passes it becomes harder and harder for them to take their fading charms to market. But their discom- fiture never breaks the glossy surface, and this is what makes Reiner's film so diffe- rent from similar material handled by Woody Allen. Its lightness of tone — it is a very cheering film — has probably bred its box-office success. It seems that people sometimes like to have their intimate dilemmas presented to them in terms that are slick and witty and bittersweet instead of just bitter.

You might, I suppose, object that Harry and Sally live in a vacuum; that they do no work, have no context, that their meetings in restaurants and public parks are heavy contrivances, and that the more the film tells us it represents real life the more plastic it appears. All this is beside the point. This film is your Christmas treat, and unless you die of a seasonal surfeit it will take you into the New Year laughing out loud.