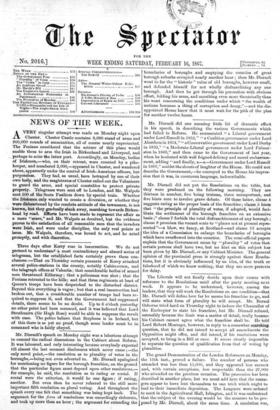 AVERY singular attempt was made on Monday night upon Chester. Chester Castle contains 9,000 stand of arms and 900,000 rounds of ammunition, all of course nearly unprotected. The Fenians considered that the seizure of this place would enable them to arm the Irish in Birkenhead and Liverpool, and perhaps to seize the latter port. Accordingly, on Monday, bodies of Irishmen,—who, on their retreat, were counted by a pike- keeper, and numbered 2,000,—appeared in Chester, and wandered about, apparently under the control of Irish-American officers, but purposeless. They had, as usual, been betrayed by one of their own body, and the magistrates of Chester called out the Volunteers to guard the arms, and special constables to protect private property. Telegrams were sent off to London, and Mr. Walpole sent 500 of the Scots Fusiliers down by special train. Whether the Irishmen only wanted to create a diversion, or whether they were disheartened by the resolute attitude of the townsmen, is not known, but they gradually slunk away, marching towards Birken- head by road. Efforts have been made to represent the affair as a mere "scare," and Mr. Walpole as deceived, but the evidence proves to the satisfaction of all reasonable men that the invaders were Irish, and were under discipline, the only real points at issue. Mr. Walpole, therefore, was bound to act, and he acted promptly, and with discretion.