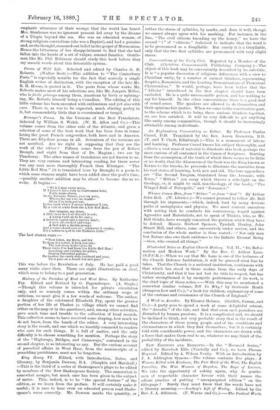 An Explanatory Commentary on Esther. By Professor Paulus Cassel, D.D.

Translated by the Rev. Aaron Bernstein, B.D. (T. and T. Clark, Edinburgh.)—This is a monument of labour and learning. Professor Cassel knows his subject thoroughly, and collects a vast mass of material to illustrate this book, perhaps the most curious of all contained in the Canon of Scripture. Starting from the assumption, of the truth of which there seems to be little or no doubt, that the Ahasuerus of the book was the King known as Xerxes to the Greeks, he proceeds to illustrate the narrative from his vast stores of learning, both now and old. The four appendices aro "The Second Targum, translated from the Aramaic, with Notes," " Mithra " (an essay which throws a side-light on the theology, or, it might be said, non-theology, of the book), " The Winged Bull of Persepolis," and " Zoroaster."