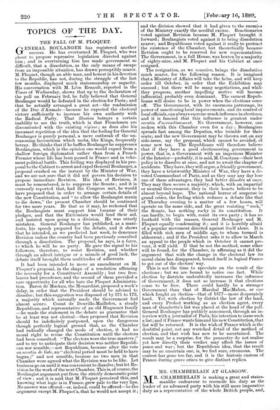 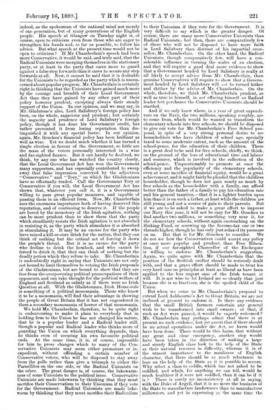 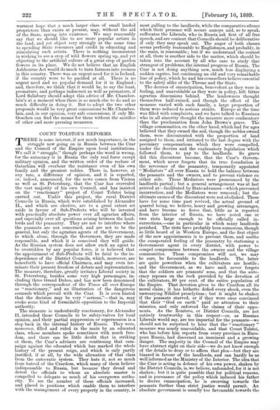 MR. CHAMBERLAIN is making a great and states- manlike endeavour to reconcile his duty as the leader of an advanced party with his still more imperative duty as a representative of the whole British people, and, indeed, as the spokesman of the national mind not merely of one generation, but of many generations of the English people. His speech at Glasgow on Tuesday night is, of course, open to criticism even from those who are eager to strengthen his hands and, so far as possible, to follow his advice. But what speech at the present time would not be open to criticism ? If Mr. Chamberlain's speech had been more Conservative, it would be said, and truly said, that the Radical Unionists were merging themselves in the stationary party, or at least in the party that cares more to guard against a false step forwards than it cares to secure any step forwards at all. Now, it cannot be said that it is desirable for the Unionists to be regarded as the party which is uncon- cerned about popular progress. Mr. Chamberlain is certainly right in thinking that the Unionists have gained much more by the courage and breadth of their Local Government Act than they have gained by any other part of their policy however prudent, excepting always their steady support of the Union. In our opinion, and we may say, in Mr. Gladstone's also, Lord Salisbury's foreign policy has been, on the whole, sagacious and prudent ; but certainly the sagacity and prudence of Lord. Salisbury's foreign policy, though it has done his Government credit, has rather prevented it from losing reputation than dis- tinguished it with any special lustre. In our opinion, again, Mr. Groschen's financial policy has been brilliant as well as wise. Yet we doubt much whether it has turned a single election in favour of the Government, so little are the mass of the voters personally interested in a wise and far-sighted finance. But it can hardly be doubted, we think, by any one who has watched the country closely, that the Local Government Act has won the Government many supporters, and has especially contributed to sweep away that false impression conveyed by the adjectives " Conservative " and "Tory," on which the Gladstonians have so effectually traded. Call the Government Tory or Conservative if you will, the Local Government Act has shown that, whatever you call it, it is a Government willing to pass great popular measures, and capable of passing them in an efficient form. Now, Mr. Chamberlain sees the enormous importance both of having deserved this reputation, and of continuing to deserve it. If the people are bored by the monotony of the Irish agitation. nothing can be more prudent than to show them that the party which steadfastly resists the Irish agitation is not absorbed in resisting it, as the party which stimulates it is absorbed in stimulating it. It may be an excuse for the party who have mixed a kill-or-cure drink for the nation, that they can think of nothing but the critical act of forcing it down the people's throat. But it is no excuse for the party who decline to drink the hemlock, and who cannot be forced to drink it, that they can think of nothing but the deadly potion which they refuse to take. Mr. Chamberlain is undoubtedly right in saying that Unionists are not only not bound to limit themselves to vetoing the Irish proposals of the Gladstonians, but are bound to show that they are free from the overpowering political preoccupations of their opponents, and can take thought for the political welfare of England and Scotland as calmly as if there were no Irish Question at all. With the Gladstonians, Irish Home-rule is something of a political monomania. Those who know it to be a monomania, will find their advantage in showing the people of Great Britain that it has not engendered in them a secondary monomania of horror of that monomania.

We hold Mr. Chamberlain, therefore, to be quite right in endeavouring to make it plain to everybody that in holding firm to the Union he has not changed his nature, that he is a popular leader and a Radical leader still, though a popular and Radical leader who thinks more of guarding the Union on which everything depends, than he thinks even of securing his own favourite political ends. At the same time, it is, of course, impossible for him to press changes which to many of the Con- servative Unionists may seem either premature or in- expedient, without offending a certain number of Conservative voters, who will be disposed to stay away from the polls rather than give a triumph to either the Parnellites on the one side, or the Radical Unionists on the other. The great danger is, of course, the lukewarm- ness of some Unionists to the political issue. Conservative Unionists are made lukewarm by thinking that they must sacrifice their Conservatism to their Unionism if they vote for the Government. Radical Unionists are made luke- warm by thinking that they must sacrifice their Radicalism to their Unionism if they vote for the Government. It is very difficult to say which is the greater danger. Of course, there are many more Conservative Unionists than Radical Unionists ; but then, there are comparatively few of these who will not be disposed to have more faith in Lord Salisbury than distrust of his impartial coun- sellor, Mr. Chamberlain. On the other hand, the Radical Unionists, though comparatively few, will have a con- siderable influence in turning the scales of an election, and they will require a good deal more evidence to show that a Government headed by Lord Salisbury is really at all likely to accept advice from Mr. Chamberlain, than genuine Conservatives will require to show that a Govern- ment headed by Lord Salisbury will not be turned hither and thither by the advice of Mr. Chamberlain. On the whole, therefore, we think Mr. Chamberlain prudent, as well as true to himself, in not effacing himself as Radical leader lest perchance the Conservative Unionists should be startled.

And if we only knew where, in a year of great expendi- ture on the Navy, the two millions, speaking roughly, are to come from, which would be wanted to transform the elementary schools into free schools, we should be disposed to give our vote for Mr. Chamberlain's Free School pro- posal, in spite of a very strong personal desire to see householders who have children of school age, specially taxed to some moderate extent, such as the amount of the school-pence, for the education of their children. There is a, great deal to be said for free schools, chiefly, we think, on the ground of the loss of educational time and labour and resource, which is involved in the collection of the school-pence. Unquestionably to promote at once the efficiency and the popularity of the elementary schools, even at some sacrifice of financial equity, would be a, great achievement, and it might fairly be pleaded that the childless householder, though he does not gain nearly as much by free schools as the householder with a family, can afford better than the father of a family to pay his education rate and his general taxation,—that it is a lighter burden upon him than it is on such a father, at least while the children are still young and not a source of gain to their parents. But if we are to be asked to make a great effort to improve our Navy this year, it will not be easy for Mr. Goachen to find another two millions, or something very near it, for the elementary schools, without again encroaching on the Sinking Fund, or screwing up the Income-tax one or two threads higher, though he has only just relaxed its pressure on us. But that is for Mr. Goachen to consider. We do not see how the Conservatives could accept any policy at once more popular and prudent, than Free Educa- tion, if our far-sighted Chancellor of the Exchequer is willing to endorse Mr. Chamberlain's suggestion. Again, we quite agree with Mr. Chamberlain that the position of the Scottish crofter should be seriously dealt with, and that a grave effort should be made to treat his very hard case on principles at least as liberal as have been applied to the less urgent case of the Irish tenant at will. It is not wise to let Ireland see so clearly that just because she is so fractious, she is the spoiled child of the Union.

But when we come to Mr. Chamberlain's proposal to extend Lord Ashbourne's Act to Great Britain, we are not inclined at present to endorse it. Is there any evidence that the small British farmers entertain any general wish to be transformed into small owners ; or that, if such an Act were passed, it would be eagerly welcomed ? Mr. Chamberlain may perhaps admit that there is at present no such evidence, but yet assert that if there should be no actual operations under the Act, no harm would have been done. There would be this harm, that without any great and clear emergency, another step would have been taken in the direction of making a large and sturdy English class look to the help of the State as their natural resource in difficulty, whereas it is of the utmost importance to the manliness of English character, that there should be as much reluctance to lean on the help of the State as it is possible to secure. Why select a class to coddle, which has not asked to be coddled, and which, for anything we can tell, would be much healthier if it were not coddled, than it can be if it is ? There is surely no inconsistency at all in saying, with the Duke of Argyll, that it is no more the business of the State to manufacture landowners than to manufacture millowners, and yet in expressing at the same time the warmest hope that a much larger class of small landed proprietors than exists at present, may, without the aid of the State, spring into existence. We may reasonably say that we should like to see more popular artists in the land, and yet object very strongly at the same time to spending State resources and credit in educating and stimulating such artists. There is nothing inconsistent in wishing to see a crop of wild flowers spring up, and yet objecting to the artificial culture of a great crop of garden flowers in its place. We do not believe that an English Ashbourne Act would do much to turn farmers into yeomen in this country. There was an urgent need for it in Ireland, if the country were to be pacified at all. There is no urgent need and no popular demand for it in England ; and, therefore, we think that it would be, to say the least, premature, and perhaps indiscreet as well as premature, if Lord Salisbury should adopt this advice of Mr. Chamber- lain's at a moment when there is so much else to do and so much difficulty in doing it. But to adopt the two other proposals would be very great concessions to Mr. Chamber- lain, and, in our opinion, very safe concessions, if only Mr. Goschen can find the means for them without the sacrifice of other and more pressing measures.