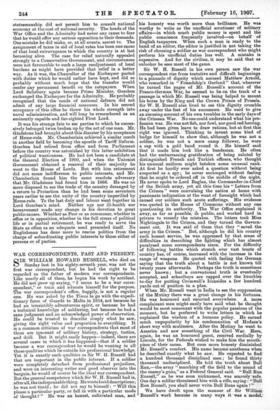 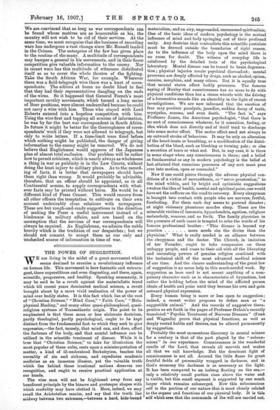 WAR CORRESPONDENTS, PAST AND PRESENT.

SIE WILLIAM HOWARD RUSSELL, who died on Sunday last in his eighty-seventh year, was not the first war correspondent, but he had the right to be regarded as the father of modern war correspondents. Like nearly all of them, he began his work by accident. He did not grow up saying, "I mean to be a war corre- spondent," or train and educate himself for the purpose. The war correspondent's office, happily, is not a regular one. He was asked by the Times to go with the expedi- tionary force of Guards to Malta in 1854, not because he had an irresistibly adventurous spirit, or because he had a technical knowledge of soldiering, but because he had a sane judgment and an acknowledged power of observation. He could be trusted to describe simply what he saw, giving the right value and proportion to everything. It is a common criticism of war correspondents that most of them are ignorant of military history, strategy, tactics, and drill. But it might easily happen—indeed, there are several cases in which it has happened—that if a soldier became a war correspondent be would be wanting in all those qualities which lie outside his professional knowledge. Yet it is exactly such qualities as Sir W. H. Russell had that are important in the public interest. If a soldier were completely detached from professional prejudices, and were an interesting writer and good observer into the bargain, he would of course be the ideal war correspondent. But the general competence which Sir W. H. Russell had is, after all, the indispensable thin g. He wrote lucid descriptions ; he was not timid ; he did not say to himself : "Will this please a particular party, or fall in with a particular mode of thought ? " He was an honest, cultivated man, and

his honesty was worth more than brilliance. He was worthy to write as the unofficial scrutineer of military affairs—in which much public money is spent and the public conscience frequently involved—on behalf of English taxpayers. When such a man is ready to the hand of an editor, the editor is justified in not taking the risk of choosing a soldier as war correspondent who might perform his unofficial duties less well. A mistake is expensive. And for the civilian, it may be said that as onlooker he sees most of the game.