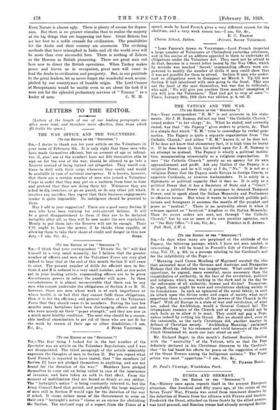 THE VATICAN AND THE WAR.

[To THE EDITOR or THE " Sproraroa.") Sia,—Your correspondent " E. M." is not accurate in his state- ments. Sir J. H. Ramsay did not say that " the Catholic Church " issued orders "to her clergy," he. What he stated, and correctly stated, was that "the Papacy" gives orders to priests, he. That is a simple fact which "E. M." tries to camouflage by verbal gym- nastics. The Papacy is quite a separate organization from " the Catholic Church," and either " E. M." knows it, or he does not. If he does not know that elementary fact, it is high time he learnt it. If he does know it, then his attack upon Sir J. H. Ramsay is an attempt to mislead. The Papacy is wholly a political institu- tion, masquerading occasionally as a religious organization. It uses " the Catholic Church" merely as an agency for its own aggrandisement and profit. Ask any Italian if the Papacy is a religious Power, and he will reply as I do, "No." It is not as a religious Power that the Papacy sends Envoys to foreign Courte, or appoints Cardinals, or receives Ambassadors. It is solely in a diplomatic or political capacity that it does so. It i9 only as a political Power that it has a Secretary of State and a "Court." It is as a political Power that it presumes to demand Temporal Power, and to speak about the Italian Monarchy and Parliament in offensive terms. But when it wants to hoodwink gullible poli- ticians and foreigners it assumes the mantle of the prophet and poses as "neutral." There is no neutrality about it when it schemes against an " heretical" kingdom or the Italian Monarchy. Then its secret orders are sent, not through " the Catholic Church," but by one or more of its own peculiar agencies, such as "the Holy Office."—I am, Sir, Fie., PORCELLI DI S. ANDREA.