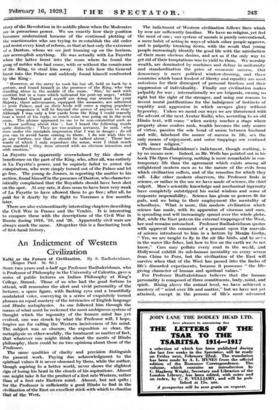 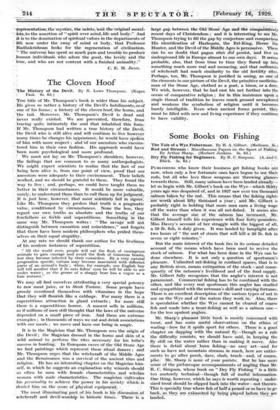 An Indictment of Western Civilization

or the Future, of Civilisation, By S. Radbaltrishnan, Megan Paul. 2s. 6d.) SOME two 'years and a-half ago Professor Radhakrishnan; who is Professor of Philosophy in the University of Calcutta, gave a series of public lectures on Indian Philosophy at King's College, Strand.. Those of us who had the good fortune to attend, will remember the alert and vivid personality of the lecturer, a spare figure, with flashing eyes and a beautifully modulated voice, conveying in a series of exquisitely turned phrases an equal mastery of the intricacies of English language and Hindu metaphysics. As one followed him through the mazes of what must be reckoned the most ambiguous system of thought which the ingenuity of the human mind has yet evolved, one was struck by what the Professor will, I hope, forgive me for calling the Western incisiveness of his mind. The subject was so obscure, the exposition so clear, the metaphysic so other-worldly, the treatment so matter of fact, that whatever one might think about the merits of Hindu philosophy, there could be no two opinions about those of the Piofessor.

The same qualities of clarity and precision distinguish the present work. Paying due acknowledgment to the spiritual values it is never obsessed by them, while the author, though aspiring to a better world, -never shows the slightest sign of losing his head in the clouds of his aspirations. Almost one might take it for the product of a first rate Western, rather than of a first rate Eastern mind. Almost, but not quite ; for the Professor is sufficiently- a good Hindu to find in the civilization of the East an excellent stick with which to chastise that of the West. —

The indictment of Western civilization follows lines which by now are sufficiently familiars We have no religion, yet fed the need of one; our system of morals is purely conventional, a mere habit of acting in ways of which other people approve, and is palpably breaking down, with the result that young people increasingly identify the good life with the satisfaction of their more obvious desires, and act as if the only way to get rid of their temptations was to yield to them. We worship wealth, arc dominated by machines and defray in uniformity and standardization the price of economic success. Our democracy is mere political window-dressing, and thoie countries which boast loudest of liberty and equality are most notorious for their- disrespect of personal freedom and their suppression of individuality. Finally our civilization makes palpably for war ; internationally we are brigands, owning no right but the right of the stronger, and using our reasons to invent moral justifications for the indulgence of instincts of cupidity and aggression in which savages glory without hypocrisy. Unless we mend our ways we are threatened with the advent of the next Avatar Kalki, who, according to an old Hindu text, will come " when society reaches a stage where property alone confers rank, wealth becomes the only source of virtue, passion the sole bond of union between husband and wife, falsehood the source of success in life, sex the only means of enjoyment, and outer trappings are confused with inner religion."

Professor Radhakrishnan's indictment, though scathing, is by no means new. Indeed, as Mr. Wells has pointed out in his book The Open Conspiracy, nothing is more remarkable in con- temporary life than the agreement which exists among all enlightened modern men as to the nature of the evils from which civilization suffers, and of the remedies for which they call. Lille other modern observers, the Professor finds in science, or rather in the use we have made of science, the chief culprit. Man's scientific knowledge and mechanical ingenuity have completely, outstripped his social wisdom and sense of corporate responsibility... Science has given us powers fit for gods, and we bring to their employment the- mentality of schoolboys. What is more, this modern civilization which science has made, with its apparatus of cinemas and ears, is spreading and will increasingly spread over the whole globe. But, while the East puts on the external trappings of the West, her soul remains untouched. Professor Radhakrishnan quotes with approval the comment of a peasant upon the marvels of science introduced to him in a lecture by Maxim Gorky. " Yes, we are taught to fly in the air like birds, and to sv..ini in the water like fishes, but how to live on the earth we do not know." Cars may pollute every road in the woad, and Hollywood, exhibit its sub-human mentality on every screen from China to Peru, but the civilization- of the East will survive when that of the West has passed into the limbo of life's discarded experiments, because it possesses " the life- giving character of human and spiritual values."

For Professor Radhakrishnan believes that the human personality is composed of three constituents, body, mind, and spirit. Rising above the animal level, we have achieved a mastery of " mind over life and matter," but we have not yet attained, except in the persons of life's most advanced

-1:epiesentatien;the. mysties, the'sahits•; jarkb thebrigin' al Metal-, lets, to the assertion of " spirit over mind, life and body." And it is to the domination of spiritual values in the departments of life now under the sway of mind or body,- that Professor Radhakrishnan looks for the regeneration of civilization. ' The universe hai spent so much pain and trouble tO-produee „human individuals Who adore the good, the lovely and -the true, and who are not content with a finished animality."