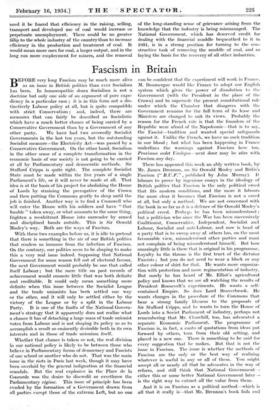 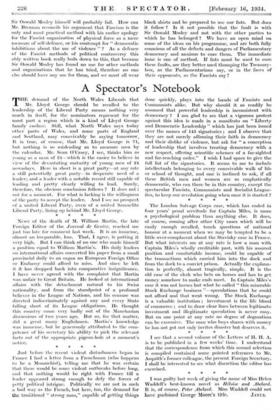 BEFORE very long Fascism may be much more alive as an issue in British politics than ever Socialism has been. In homoeopathic doses Socialism is not a doctrine but only one side of an argument of pure expe- diency in a particular case ; it is in this form not a dis- tinctively Labour policy at all, but is quite compatible with strict Conservatism ; and, indeed, there are measures that can fairly be described as Socialistic which have a much better chance of being carried by a Conservative Government than by a Government of any other party. We have had two avowedly Socialist Governments in the last ten years, but the outstanding Socialist measure—the Electricity Act—was passed by a Conservative Government. On the other hand, Socialism, in the other sense of a complete transformation in the economic basis of our society is not going to be carried at all by Parliamentary and democratic methods. Sir Stafford Cripps is quite right. The complete Socialist State must be made within the five years of a single Parliament's life, or it will never be made at all. That idea is at the basis of his project for abolishing the House of Lords by straining the prerogative of the Crown and then putting the Commons gently to sleep until the job is finished. Another way is to find a Cromwell who will enter the House with his soldiers and have "that bauble" taken away, or what amounts to the same thing, frighten a recalcitrant House into surrender by armed. and disciplined bands outside. This is Sir Oswald Mosley's way. Both are the ways of Fascism.

With these two examples before us, it is idle to pretend that there is something in the air of our British politics that renders us immune from the infection of Fascism. On the contrary, our politics seem to be shaping to make this a very real issue indeed. Supposing that National Government for some reason fell out of electoral favour, the next Government would probably be one that called itself Labour ; but the mere title on past records of achievement would connote little that was both definite and creditable. It could only mean something more definite when this issue between the Socialist League and the trade unionists has beeh settled one way or the other, and it will only be settled either by the victory of the League or by a split in the Labour Party. It is one of the faults of the National Govern- ment's strategy that it apparently does not realize what a chance it has of detaching a large mass of trade unionist votes from Labour and is not shaping its policy so as to accomplish a result so eminently desirable both in its own interests and in those of trade unionism itself.

• Whether that chance is taken or not, the real division in our national policy is likely to be between those who believe in Parliamentary forms of democracy and Fascists of one school or another who do not. That was the main issue in the riots in Paris last week, though it may have been overlaid by the general indignation at the financial scandals. But the real explosive in the Place de la Concorde was the desire to discredit or overthrow the Parliamentary regime. This issue of principle has been evaded by the formation of a Government drawn from all parties except those of the extreme Lek but no one can be confident that the experiment will work in France. M. Dotunergue would like France to adopt our English system which gives the power of dissolution to the Government (with the President in the place of the Crown) and to supersede the present constitutional rule under which the Chamber that disagrees with the Government remains for the full term of its lease and Ministers are changed to suit its views. Probably the reason for the French rule is that the founders of the Republic were afraid of the Napoleonic—that is to say. the Fascist—tradition and wanted special safeguards against it. Unlike the French, we have no such tradition in our blood ; but what has been happening in France underlines the warnings against Fascism here too. Proximus ardet Ucalegon—next door may be afire with Fascism any day.

There has appeared this week an ably written book, by Mr. James Drennan, on Sir Oswald Mosley and British Fascism (" B.U.F." , published by John Murray). It labours to prove by ingenious essays in the ideology of British politics that Fascism is the only political creed that fits modern conditions, and the more it labours the more clear it becomes that Fascism is not a creed at all, but only a method. We are not concerned with the book in so far as it is a defence of Sir Oswald Mosley's political creed. Perhsp; he has been misunderstood ;- but a politician who since the War has been successively Coalitionist, Conservative, Independent, Socialist and Labour, Socialist and anti-Labour, and now is head of a party that is to sweep away al: others has, on the most. favourable view, misunderstood other parties and must not complain of being misunderstood himself. But how amazingly little is there that is original in his programme. Loyalty to the throne is the first tenet of the dictator Fascists ; but you do not need to wear a black or any other colour of shirt for that. He wants more organiza- tion with protection and more regimentation of industry. But surely he has heard of Mr. Elliot's agricultural policy and knows that we arc all watching the results of President Roosevelt's experiments. He wants a self- contained Empire. So does Lord Beaverbrook. He wants changes in the procedure of the Commons that bear a strong family likeness to the proposals of Sir Stafford Cripps, and he wants to turn the House of Lords into a Soviet Parliament of industry, perhaps not remembering that Mr. Churchill, too, has advocated a separate Economic Parliament. The programme of Fascism is, in fact, a canto of quotations from ideas put forward by others, torn from their old setting, and placed in- a new one. There is something to be said for every suggestion that he makes. But that is not the issue in Fascism. The issue is whether the methods of Fascism are the only or the best way of realizing whatever is useful in any or all of them. You might accept all or nearly all that he advocates in the way of reform, and still think that National Government— either this or some better National Government later— is the right way to extract all the value from them.

And it is on Fascism as a political method—which is that it really is—that Mr..Brenaim's book fails and Sir Oswald Mosley himself will probably fail. How can Mr. Brennan reconcile his argument that Fascism is the only and most practical method with his earlier apology for the Fascist organization of physical force as a mere measure of self-defence, or his contempt for "democratic inhibitions about the use of violence " ? As a defence of the Fascist methods of political controversy this ably written book really boils down to this, that because Sir Oswald Mosley has found no use for other- methods and organizations that he has tried, therefore no one else should have any use for them, and we must all wear black shirts and be prepared to use our fists. But does it follow ? Is it not possible that the fault is with Sir Oswald Mosley and not with the other parties to which he has belonged ? We have an open mind on some of the ideas on his programme, and are both fully conscious of all the defects and dangers of Parliamentary democracy and anxious to cure them. The immediate issue is one of method. If fists must be used to cure these faults, arc they better used thumping the Treasury- box, as the Parliamentarians say, or in the faces of their opponents, as the Fascists say?