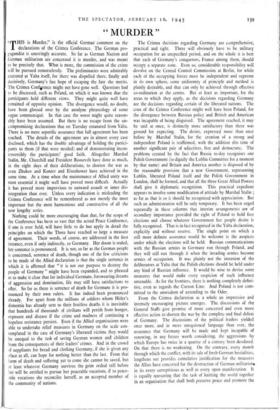 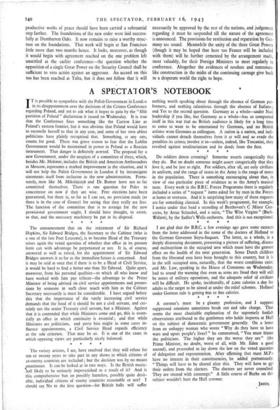 JHIS is Murder," is the official German- comment on the declarations of the Crimea Conference. The German pro- pagandist is unerringly accurate. So far as German Nazism and German militarism are concerned it is murder, and was meant to be precisely that. What is more, the commission of the crime will be pursued remorselessly. The preliminaries were admirably executed at Yalta itself, for there was dispelled there, finally and decisively, Germany's last hope of escaping the fate she merits. The Crimea Conference might not have gone well. Questions had to be discussed, such as Poland, on which it was known that the participants held different views. They might quite well have remained of opposite opinion. The divergence would, no doubt, have been glossed over by the anodyne phraseology of some vague communique. In that case the worst might quite reason- ably have been assumed. But there is no escape from the un- compromising declarations that on Tuesday emanated from Yalta. There is no mere soporific assurance that full agreement has been reached. The details of the agreement are in almost every case disclosed, which has the double advantage of holding the partici- pants to them (if that were needed) and of demonstrating incon- trovertibly the participants' good faith. Altogether Marshal Stalin, Mr. Churchill and President Roosevelt have done as much, in the eight days of their deliberations, to shorten the war as even Zhukov and Koniev and Eisenhower have achieved in the same time. At a time when the maintenance of Allied unity was most essential it might well have proved most difficult. Actually it has proved more impervious to outward assault or inner dis- integration than ever. Unless every indication is misleading the Crimea Conference will be remembered as not merely the most important but the most harmonious and constructive of all the now lengthy series.

Nothing could be more encouraging than that, for the scope of the Conference has been so vast that the actual Peace Conference, if one is ever held, will have little to do but apply in detail the principles on which the Three have reached so large a measure of agreement. Their words, of course, are addressed in the first instance, even if only indirectly, to Germany. Her doom is sealed, her sentence is pronounced. It is not, so far as the German people is concerned, sentence of death, though one of the few criticisms to be made of the Allied declaration is that the single sentence in which it is affirmed that " it is not our purpose to destroy the people of Germany " might have been expanded, and so phrased as to make it clear that for individual Germans, forswearing dreams of aggression and domination, life may still have satisfactions to offer. So far as there is sentence of death for Germans it is pro- nounced by their own rulers. It has indeed been pronounced already. For apart from the millions of soldiers whom Hitler's dementia has already sent to their fruitless deaths it is inevitable that hundreds of thousands of civilians will perish from hunger, exposure and disease if the crime and madness of continuing a hopeless resistance persists. Even if the Allied organisations were able to undertake relief measures in Germany on the scale con- templated in the case of Germany's liberated victims they would be unequal to the task of saving German women and children from the consequences of their leaders' crimes. And in the crowd of suppliants for bread and clothing Germany, if she is given any place at all, can hope for nothing better than the last. From that form of death and suffering yet to come she cannot be saved, but at least whatever Germany survives the grim ordeal still before her will be entitled to pursue her peaceable vocations, if to peace- able vocations she reconciles herself, as an accepted member of the community of nations. The Crimea decisions regarding Germany are comprehensive, practical and right. There will obviously have to be military occupation for an unspecified period, and on the whole it is best that each of Germany's conquerors, France among them, should occupy a separate zone. Even so, considerable responsibility will devolve on the Central Control Commission at Berlin, for while each of the occupying forces must be independent and supreme in its own sphere, some uniformity of principle and method is plainly desirable, and that can only be achieved through effective co-ordination at the centre. But at least as important, for the areas to which they apply, as the decisions regarding Germany are the decisions regarding certain of the liberated nations. The crux of the Crimea Conference might well have been Poland; for the divergence between Russian policy and British and American was incapable of being disguised. The agreement reached, it may be said at once, is distinctly more satisfactory than there was ground for expecting. The desire, expressed more than once before by Marshal Stalin, for the creation of a strong and independent Poland is reaffirmed, with the addition this time of another significant pair of adjectives, free and democratic. The problems created by the fact that Russia to-day recognises one Polish Government (to dignify the Lublin Committee for a moment by that name) and Britain and America another is disposed of by the reasonable provision that a new Government, representing Lublin, liberated Poland itself and the Polish Government in London, shall be formed, and that all the three Great Allied Powers shall give it diplomatic recognition. This practical expedient appears to involve some modification of attitude by Marshal Stalin ; as far as that is so it should be recognised with appreciation. But such an administration will be only temporary. It has been urged repeatedly in these columns that interim arrangements are of secondary importance provided the right of Poland to hold free elections and choose whatever Government her people desire is fully recognised. That is in fact recognised in the Yalta declaration, explicitly and without reserve. The single point on which a still more definite assurance would be welcome is the auspices under which the elections will be held. Russian communications with the Russian armies in Germany run through Poland, and they will still run through it when the invading armies become armies of occupation. It was plainly not the intention of the deliberators at Yalta that the Polish elections should be held under any kind of Russian influence. It would be wise to devise some measures that would make every suspicion of such influence untenable. As for the frontiers, there is nothing completely defini- tive, even as regards the Curzon Line. And Poland is not com- mitted to the unwisdom of extending to the Oder.

From the Crimea declaration as a whole an impressive and intensely encouraging picture emerges. The discussions of the General Staffs give promise of more concerted and even more effective action to shorten the war by the complete and final defeat of Germany. The discussions of the political leaders yielded once more, and in more unequivocal language than ever, the assurance that Germany will be made and kept incapable of renewing, in any future worth considering, the aggressions by which Europe has twice in a quarter of a century been desolated. On that there is no weakening. On the contrary, every month through which the conflict, with its tale of fresh German bestialities, lengthens out provides cumulative justification for the measures the Allies have concerted for the destruction of German militarism in its every surreptitious as well as every open manifestation. It is equally reassuring that the task of knitting the world together in an organisation that shall both preserve peace and promote the. productive works of peace should have been carried a substantial step farther. The foundations of the new order were laid success- fully at Dumbarton Oaks. It now remains to raise a worthy struc- ture on the foundations. That work will begin at San Francisco little more than two months hence. It looks, moreover, as though it would begin with agreement reached on the one problem left unsettled at the earlier conference—the question whether the opposition of a single Great Power on the Security Council shall be sufficient to veto action against an aggressor. An accord on this too has been reached at Yalta, but it does not follow that it will necessarily be approved by the rest of the nations, and judgement regarding it must be suspended till the nature of the agreement is announced. The provisions for restitution and reparation by Ger- many are sound. Meanwhile the unity of the three Great Powers (though it may be hoped that here too France will be included with them) will be further cemented by the arrangement made, most valuably, for their Foreign Ministers to meet regularly in conference. Altogether the evidences of resolute and statesman- like construction in the midst of the continuing carnage give back to a desperate world the right to hope.