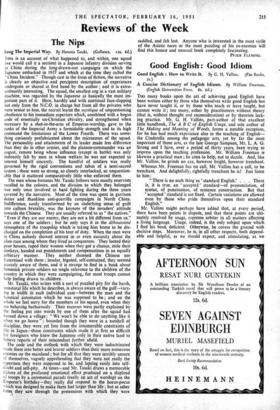 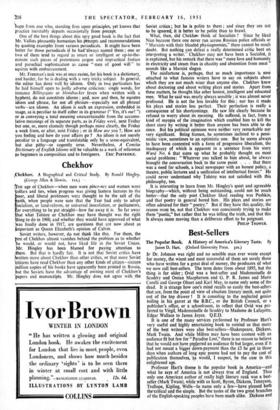 A Concise Dictionary of English Idioms. By William Freeman. (English Universities Press. 8s. 6d.) Too many books upon the art of achieving good English have been written either by those who themselves write good English but have never taught it, or by those who teach or have taught, but cannot write it ; too many, either by practitioners without theory (that is, without thought and reconsideration) or by theorists lack- ing practice. Mr. G. H. Vallins, part-author of that excellent little handbook, The A B C of English Usage, and sole author of The Making and Meaning of Words, forms a notable exception, for he has had much experience also in the teaching of English— the Cinderella among the pedagogic arts, yet by far the most important of those arts, as the late George Sampson, Mr. L. A. G. Strong and I have, over a period of thirty years, been trying to impress upon the teaching profession. Mr. William Freeman is likewise a practical man ; he aims to help, not to dazzle. And, like Mr. Vallins, he grinds no axe, however bright, however trenchant.

Whereas Mr. Freeman has no call, Mr. Vallins has a call, to be trenchant. And delightfully, rightfully trenchant he is! Just listen to him:

Mr. Vallins might perhaps have added that, at every period, there have been points in dispute, and that these points are ulti- mately resolved by usage, supreme arbiter in all matters affecting a living language. Usage, indeed, is the only subject upon which I find his book deficient. Otherwise, he covers the ground with decisive steps. Moreover, he is, in all other respects, both depend- able and helpful, as we should expect, and stimulating, as we 'hope from one who, standing firm upon principles, yet knows that practice inevitably departs occasionally from precept.

One of the best things about this very good book is the fact that Mr. Vallins pleasantly humanises his precepts and recommendations by quoting examples from various periodicals. It might have been better for those periodicals if he had always named them ; one or two of them tend to regard as smart or intelligent or up-to-the- minute such pieces of pretentious jargon and impractical fustian and parochial sophistication as cause " men of good will" to squirm with embarrassment.

Mr. Freeman's task was at once easier, for his book is a dictionary, and harder, for he is dealing with a very tricky subject. In general, the editor has done well by idioms. Only in two particulars has he laid himself open to justly adverse criticism: single words, for instance Billingsgate or bloodsucker (even when written with a hyphen), do not constitute idioms ; and, now and then, he equates idiom and phrase, for not all phrases—especially not all phrasal verbs—are idioms. An idiom is such an expression, embedded in usage, as is peculiar to itself either in its grammar (" Yes, it's me! ") or in conveying a total meaning unascertainable from the accumu- lative meanings of its separate parts, as in Friday week, next Friday but one, or, more clumsily though perhaps more clearly, the Friday a week from, or after, next Friday ; or in How are you ?, How are you feeling and how do your affairs go ? An idiom is not merely peculiar to a language and translatable only by a sense-equivalent, but also pithy—or cogently terse. Nevertheless, A Concise Dictionary of English Idioms will be valuable as a work of reference to beginners in composition and to foreigners. ERIC PARTRIDGE.