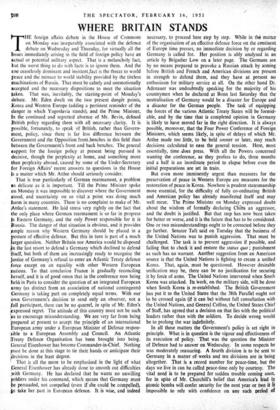 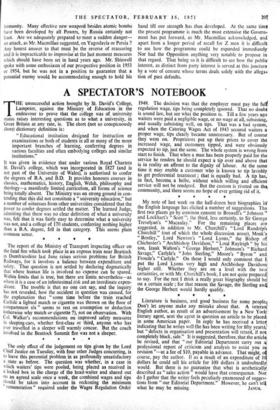 WHERE BRITAIN STANDS T HE foreign affairs debate in the House

of Commons on Monday was inseparably associated with the defence debate on Wednesday and Thursday, for virtually all the Issues immediately arising in the field of foreign policy have an actual or potential military aspect. That is a melancholy fact, but the worst thing to do with facts is to ignore them. And the one ceaselessly dominant and insistentjact is the threat to world peace and the menace to world stability provided by the tireless machinations of Russia. That must be calmly and unemotionally accepted and the necessary dispositions to meet the situation 'taken. That was, inevitably, the starting-point of Monday's debate. Mr. Eden dwelt on the two present danger points, Korea and Western Europe (adding a pertinent reminder of the danger in which Yugoslavia stands), and the Prime Minister, In the continued and regretted absence of Mr. Bevin, defined British policy regarding them with all necessary clarity. It is possible, fortunately, to speak of British. rather than Govern- ment, policy, since there is far less difference between the Government and the Opposition front,benches in this field than between the Government's front and back benches. The general support for the foreign policy at present being pursued is decisive, though the perplexity at home, and something more than perplexity abroad, caused by some of the Under-Secretary for Foreign Affairs' recent answers to questions in the House Is a matter which Mr. Attlee should seriously -consider.

That is true particularly of German rearmament, a problem as delicate as it is important. Till the Prime Minister spoke on Monday it was impossible to discover where the Government stood, and uncertainty on so vital a point was doing much harm in many countries. There is no complaint to make of Mr. Attlee's statement. He laid stress very rightly on the fact that the only place where German rearmament is so far in progress gs Eastern Germany, and the only Power responsible for it is Russia. The danger of that situation is obvious, and it provides Ftmple reason why Western Germany should be placed in a posture of effective defence. But this in turn is part of a much larger question. Neither Britain nor America would be disposed n the last resort to defend a Germany which declined to defend tself, but both of them are increasingly ready to recognise the justice of Germany's refusal to enter an Atlantic Treaty defence force except on an equality with other Western European ;nations. To that conclusion France is gradually reconciling herself, and it is of good omen that in the conference now being held in Paris to consider the question of an integrated European army (as distinct from an association of national contingents) Germany is taking part on completely equal terms. With our Own Government's decision to send only an observer, not a I lull participant, there can be no quarrel, in spite of Mr. Eden's ;expressed regret. The attitude of this country must not be such 'as to encourage misunderstanding. We are very far from being I prepared at present to accept the principle of an international European army under a European Minister of Defence respon- sible to a European Assembly and Council. An Atlantic 'Treaty Defence Organisation has been brought into being. General Eisenhower has become Commander-in-Chief. Nothing Fnust be done at this stage to tie their hands or anticipate their decisions in the least degree.

' That is all the more to be emphasised in the light of what peneral Eisenhower has already done to smooth out difficulties with Germany. He has declared that he wants no unwilling Foldiers under his command, which means that Germany must be persuaded, not compelled (even if she could be compelled), jto take her part in European defence. It is wise, and indeed necessary, to proceed here step by step. While in the matter of the organisation of an effective defence force on the continent of Europe time presses, no immediate decision by or regarding Germany is called for. Her position is ably analysed in an article by Brigadier Low on a later page. The Germans are by no means prepared to provoke a Russian attack by arming before British and French and American divisions are present in strength to defend them, and they have at present no enthusiasm for military service at all. On the other hand Dr. Adenauer was undoubtedly speaking for the majority of his countrymen when he declared at Bonn last Saturday that the neutralisation of Germany would be a disaster for Europe and a disaster for the German people. The task of equipping the forces of the various Atlantic Treaty States will be formid- able, and by the time that is completed opinion in Germany is likely to have moved far in the right direction. It is always possible, moreover, that the Four Power Conference of Foreign Ministers, which seems likely, in spite of delays of which Mr. Attlee made too little, to be held sooner or later, may reach decisions calculated to ease the general tension. Here, most essentially, time .does press. With all the Powers concerned wanting the conference, as they profess to do, three months and a half is an inordinate period to elapse before even the initial preparations are set in train.

But even more imminently urgent than measures for the preservation of peace in Western Europe are measures for the restoration of peace in Korea. Nowhere is prudent statesmanship more essential, for the difficulty of fully co-ordinating British and American policy has already manifested itself and may well recur. The Prime Minister on Monday expressed doubt about the wisdom of formally declaring Chilta an aggressor, and the doubt is justified. But that step has now been taken for better or worse, and it is the future that has to be considered. One or two misunderstandings ought to be corrected before they go further. Senator Taft said on Tuesday that the business of the United Nations was to punish aggression. That must be challenged. The task is to prevent aggression if possible, and failing that to check it and restore the status quo; punishment as such has no warrant. Another suggestion from an American source is that the United Nations is fighting to create a unified Korea. That, again, must be questioned. However desirable unification may be, there can be no justification for securing it by forde of arms. The United Nations intervened when South Korea was attacked. Its Pork, on the military side, will be done when South Korea is re-established. The British Government has put it to the United States that the 38th Parallel ought not to be crossed again (if it can be) without full consultation with the United Nations, and General Collins, the United States Chief of Staff, has agreed that a decision on that lies with the political leaders rather than with the soldiers. To decide wrong would be to prolong the war indefinitely.

In all these matters the Government's policy is set right in principle. What is in question is the vigour and effectiveness of its execution of policy. That was the question the Minister of Defence had to answer on Wednesday. In some respects he was moderately reassuring. A fourth division is to be sent to Germany in a matter of weeks and ten divisions are in being altogether. That is a record number for peace-time, but the days we live in can be called peace-time only by courtesy. The vital need is to be prepared for sudden trouble coming soon. for in spite of Mr. Churchill's belief that America's lead tomic bombs will confer security for the next year or two It Impossible to rely with confidence on any such ceded immunity. Many effective new weapon i besides atomic bombs have been developed by all Powers, by Russia certainly not least. Are we adequately prepared to meet a sudden danger— an attack, as Mr. Macmillan suggested, on Yugoslayia or Persia ? Any honest answer to that must be the reverse of reassuring and it is impracticable to improvise at the last moment measures which should have been set in hand years ago. Mr. Shinwell spoke with some enthusiasm of our prospective position in 1953 or 1954, but he was not in a position to guarantee that a potential enemy would be accommodating enough to hold his hand till our strength has thus developed. At the same time the present programme is much the most extensive the Govern- ment has put forward, as Mr. Macmillan acknowledged, and apart from a longer period of recall for Z men it is difficult to sec how the programme could be expanded immediately Nor had the Opposition anything very notable to propose in that regard. That being so it is difficult to see how the public interest, as distinct from party interest is served at this juncture by a vote of censure whose terms deals solely with the allegal tion of past defaults.