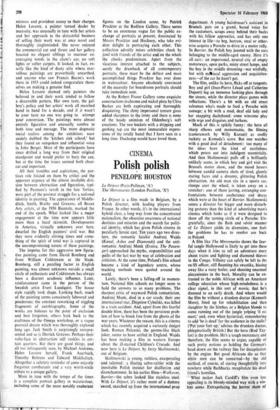 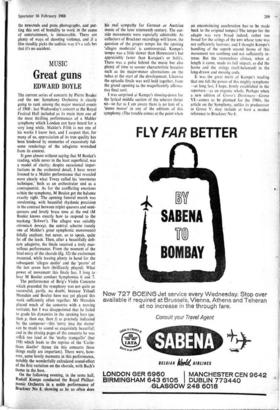 Le Depart (Paris-Pullman, 'A') The Mercenaries (London Pavilion, 'X') Le Depart is a film made in Belgium, by a Polish director, with leading players from France. In other words, it's in the international hybrid class, a long way from the concentrated nationalism, the obsessive awareness of national destinies and miseries and the search for politi- cal identity, which has given Polish cinema its peculiarly heroic cast. Ten years ago two direc- tors, the romantic fatalist Andrzej Wajda (Kanal, Ashes and Diamonds) and the anti- romantic Andrzej Munk (Eroica, The Passen- ger) approached the myths, responsibilities and guilts of the last war by way of celebration and criticism. At the same time, Poland's film school became a kind of legendary centre, whose teaching methods were quoted around the world.

Lately, there's been a falling-off in momen- tum. National film schools no longer seem to hold the answers to so many problems. The sharpest critic of wayward Polish romanticism, Andrzej Munk, died in a car crash; their one international star, Zbigniew Cybulski, was killed in a train accident. And, apart from this fearful double blow, there has been the persistent prob- lem of how to break free from the ghosts of the war years. Whatever the reason, this is a cinema which has recently acquired a curiously émigré look. Roman Polanski, the gnome-like black joker, seems to have settled in England. Wajda has been making a film in western Europe -about the ill-starred Children's Crusade. And now here is Le Depart, by Jerzy Skolimowski, out of Belgium.

Skolimowski is young, ruthless, exasperating • and talented: a blazing sabre-rattler with the

inevitable Polish instinct for disillusion and disenchantment. In his earlier films—Walkover, Barrier—the sabre looked like stainless steel. With Le Depart, it's rather more of a dummy -sword, snatched up from the international prop

department. A young hairdresser's assistant in Brussels puts on a grand, bored voice for the customers, scraps away behind their backs with his fellow apprentice, and has only one interest in life—to beg, borrow, steal or other- wise acquire a Porsche to drive in a motor rally.

In Barrier, the Polish boy jousted with the cars belonging to the middle-aged enemy. Here it's

all cars: an impersonal, neutral city of empty motorways, open parks, misty street lamps, and the boy in the middle dreaming—not wistfully, but with malliacal aggression and acquisitive- ness—of the car he hasn't got.

The film, unlike its hero, flicks off at tangents.

Boy and girl (Jean-Pierre Ldaud and Catherine Duport) lug an immense looking-glass through the streets, while the director plays games with reflections. There's a bit with an old street salesman who's made to feed a Porsche with sausage; a bit with a mad, deaf old lady and her snapping dachshund; some winsome play with wigs and disguises and turbans.

Much of this is spikily funny: the hero all sharp elbows and monomania, the filming (camerawork by Willy Kurant) as coolly rackety as Komeda's score. But one watches with a good deal of detachment: too many of the ideas have the kind of zestfulness which peters out into indulgent eccentricity. And then Skolimowski pulls off a brilliantly unlikely scene, in which boy and girl visit the Brussels motor show, and the mood hovers between candid camera shots of tired, glumly staring faces and a dreamy, glittering Polish abstraction. An old man sits in a sports car, slumps over the wheel, is taken away on a stretcher : one of those jarring, estranging con- frontations between exuberance and decay which were at the heart of Barrier. Skolimowski seems a director for bigger and more disturb- ing gestures than the kind of advertising -man's cinema which looks as if it were designed to show off the turning circle of a Porsche. Un- gratefully, since the flash and viriti manner of Le Depart yields its diversions, one feels the problems he has to resolve are back in Poland.

A film like The Mercenaries shows the fear- ful tangle Hollywood is likely to get into these days when it tries to tell an adventure story about trains and fighting and diamond thieves in the Congo. Villainy can safely be left to the ex-SS officer, still flaunting his swastika, hissing away like a rusty boiler, and shooting unarmed piccaninnies in the back. Morality can be en- trusted to the noble African with an American college education whose high-mindedness is a clear signal, in this sort of movie, that he's doomed to an early death. And where would the film be without a drunken doctor (Kenneth More), lined up for rehabilitation and then slaughter by the Simbas, or a Belgian blonde to come running out of the jungle yelping 'ii est mort,' and, even when hysterical, remembering to add 'he is dead' for the audience in the stalls? (Put your feet up,' advises the drunken doctor, phlegmatically British.) But the hero (Rod Tay- lor) is the problem. He's a tough mercenary and therefore, the film seems to argue, capable of such pretty notions as holding the German's head down on the railway line for decapitation by the engine. But good Africans die so that white men can be converted—by the old method, of course, of staring thoughtfully into nowhere while flashbacks recapitulate his dead friend's homilies.

What makes Jack Cardiff's film even less appealing is its bloody-minded way with a vio- lent scene. Extrapolating the horror shots of the newsreels and press photographs, and put- ting this sort of brutality to work in the cause of entertainment, is inexcusable. There are plenty of ways of shooting violence, and if a film steadily picks the sadistic way it's a safe bet that it's no accident.