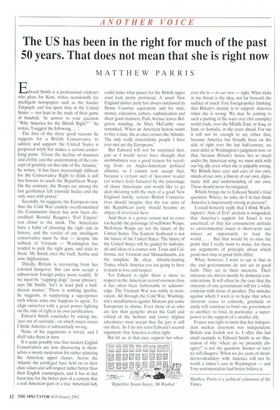 The US has been in the right for much of

the past 50 years. That does not mean that she is right now

Edward Smith is a professional cricketer who plays for Kent, writes occasionally for intelligent newspapers such as the Sunday Telegraph, and has spent time in the United States — not least in the study of their game of baseball. 'In answer to your question "Why America for the British Right?"' he writes, 'I suggest the following. . . '.

The first of the three good reasons he suggests for a British Conservative to admire and support the United States is proposed wryly but makes a serious underlying point. 'Given the decline of manners and civility and the undermining of the concept of gentility on this side of the Atlantic,' he writes, 'it has been increasingly difficult for the Conservative Right to think it still has lessons to teach the Republican Wasp. On the contrary, the Wasps are among the last gentlemen left (outside India) and the only ones with power.'

Secondly, he suggests, the European view that the Cold War crudely overdramatised the Communist threat has now been discredited. Ronald Reagan's 'Evil Empire' was closer to the mark. The Americans have a habit of choosing the right side in history, and the verdict of any intelligent conservative must be that — despite the setback of Vietnam — Washington has tended to pick the right guns, and stick to them. Mr Smith cites the Gulf, Serbia and now Afghanistan.

Thirdly, Britain is recovering from her colonial hangover. She can now accept a subservient foreign policy more readily. 'If we must be "yapping dogs" (your phrase); says Mr Smith, 'let's at least pick a halfdecent master.' There is nothing ignoble, he suggests, in supporting a superpower with whose aims one happens to agree. To align ourselves with a great power fighting on the side of right is its own justification.

Edward Smith concludes by asking me, 'just out of curiosity', on which major issues I think America is substantially wrong.

None of his arguments is trivial, and I shall take them in turn.

It is quite possibly true that modern English Conservatives are now discovering in themselves a snooty motivation for rather admiring the American upper classes. Across the Atlantic the privileged have held on to their class values and self-respect rather better than their English counterparts. and it has in fact been true for the better part of a century that a real American gent or a true American lady could make what passes for the British upper crust look pretty provincial. A smart New England dinner party has always outclassed its Home Counties equivalent; and for style, money, education, culture, sophistication and sheer good manners, Park Avenue leaves Belgravia standing. As Mary McCarthy once remarked, 'When an American heiress wants to buy a man, she at once crosses the Atlantic. The only really materialistic people I have ever met are the Europeans.'

But Edward will not be surprised that, just as I would never have thought that snobbishness was a good reason for recoiling from an Anglo-American political alliance, so I cannot now accept that, because a certain sort of Spectator reader (or writer) feels flattered by the patronage of classy Americans and would like to go deer-shooting with the men of a good New England family. serious British Conservatives should imagine that the war aims of the Republican party should become an object of reverence here.

Yet Edward is right: there is more to respect in the American record overseas than it has often been fashionable to acknowledge. The Vietnam War was noble in motivation. All through the Cold War, Washington's steadfastness against Moscow put some Europeans to shame. Even those of us who are less than gung-ho about the Gulf and critical of the Serbian and (now) Afghan adventures must accept that the jury is still out there. So I do not resist Edward's second argument: that America is often right.

But let us, in that case, support her when iU" UMEMEEMEE 0 /I; // AP C. Etign gEg ever she is — in our view — right. What sticks in my throat is the idea, not far beneath the surface of much Tory foreign-policy thinking, that Britain's destiny is to support America when she is wrong. We may be coming to such a parting of the ways over (for example) world trade, over the Middle East, or Iraq, or Iran, or Somalia. in the years ahead. For me it will not be enough to say either that, because America has broadly been on the side of right over the last half-century, we must defer to Washington's judgment now; or that, because Britain's future lies so much under the American wing, we must stick with our big ally even when she is palpably wrong. We British have eyes and ears of our own, minds of our own, a history of our own, diplomatic skill and understanding of our own. These should never be relegated.

Which brings me to Edward Smith's final question. Where, he asks, do I in fact think America is importantly wrong at present?

I could honestly reply that I think Washington's 'Axis of Evil' analysis is misguided; that America's support for Israel is too uncritical; or that her consumerist attitude to environmental issues is short-term and misses an opportunity to lead the world. . . . But that would be to miss the point that I really want to make, for these are arguments of principle about which good men may in good faith differ.

What, however, I want to say is that in the end governments do not act in good faith. They act in their interests. Their interests are driven mostly by domestic considerations. It will often be the case that the interests of one government will for a while coincide with those of another. The mistake against which I warn is to hope that when interests cease to coincide, gratitude or amity will continue to bind one government to another; to bind, in particular, a superpower to the support of a smaller ally.

France was right to insist that her independent nuclear deterrent was independent; Britain was foolish not to. I offer this last small example to Edward Smith as an illustration of why 'where do we presently disagree?' is not the question. Sooner or later we will disagree. When we do, years of shoulder-to-shouldety with America will not be worth a tinker's cuss in Washington — and Tory sentimentalists had better believe it.

Matthew Parris is a political columnist of the Times.