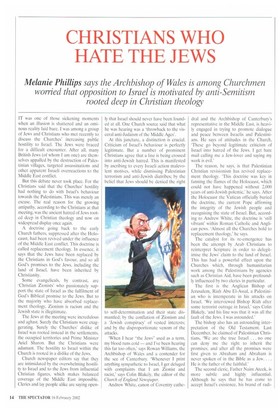 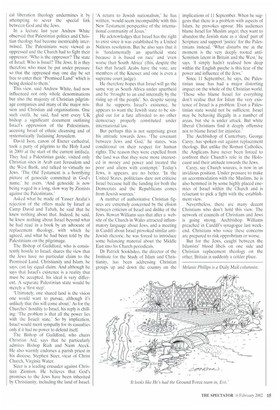 CHRISTIANS WHO HATE THE JEWS

Melanie Phillips says the Archbishop of Wales is among Churchmen

IT was one of those sickening moments when an illusion is shattered and an ominous reality laid bare. I was among a group of Jews and Christians who met recently to discuss the Churches' increasing public hostility to Israel. The Jews were braced for a difficult encounter. After all, many British Jews (of whom I am one) are themselves appalled by the destruction of Palestinian villages, targeted assassinations and other apparent Israeli overreactions to the Middle East conflict.

But this debate never took place. For the Christians said that the Churches' hostility had nothing to do with Israel's behaviour towards the Palestinians. This was merely an excuse. The real reason for the growing antipathy, according to the Christians at that meeting, was the ancient hatred of Jews rooted deep in Christian theology and now on widespread display once again.

A doctrine going back to the early Church fathers, suppressed after the Holocaust, had been revived under the influence of the Middle East conflict. This doctrine is called replacement theology. In essence, it says that the Jews have been replaced by the Christians in God's favour, and so all God's promises to the Jews, including the land of Israel, have been inherited by Christianity.

Some evangelicals, by contrast, are 'Christian Zionists' who passionately support the state of Israel as the fulfilment of God's Biblical promise to the Jews. But to the majority who have absorbed replacement theology, Zionism is racism and the Jewish state is illegitimate.

Church newspaper editors say that they are intimidated by the overwhelming hostility to Israel and to the Jews from influential Christian figures, which makes balanced coverage of the Middle East impossible. Clerics and lay people alike are saying open ly that Israel should never have been founded at all. One Church source said that what he was hearing was a 'throwback to the visceral anti-Judaism of the Middle Ages'.

At this juncture, a distinction is crucial. Criticism of Israel's behaviour is perfectly legitimate. But a number of prominent Christians agree that a line is being crossed into anti-Jewish hatred. This is manifested by ascribing to every Israeli action malevolent motives, while dismissing Palestinian terrorism and anti-Jewish diatribes; by the belief that Jews should be denied the right to self-determination and their state dismantled; by the conflation of Zionism and a 'Jewish conspiracy' of vested interests; and by the disproportionate venom of the attacks.

'When I hear "the Jews" used as a term, my blood runs cold — and I've been hearing this far too often,' says Rowan Williams, the Archbishop of Wales and a contender for the see of Canterbury. 'Whenever I print anything sympathetic to Israel, I get deluged with complaints that I am Zionist and racist,' says Colin Blakely, the editor of the Church of England Newspaper.

Andrew White, canon of Coventry cathe drat and the Archbishop of Canterbury's representative in the Middle East, is heavily engaged in trying to promote dialogue and peace between Israelis and Palestinians. He says of attitudes in the Church, 'These go beyond legitimate criticism of Israel into hatred of the Jews. I get hate mail calling me a Jew-lover and saying my work is evil.'

The reason, he says, is that Palestinian Christian revisionism has revived replacement theology. 'This doctrine was key in fanning the flames of the Holocaust, which could not have happened without 2,000 years of anti-Jewish polemic,. he says. After the Holocaust the Vatican officially buried the doctrine, the current Pope affirming the integrity of the Jewish people and recognising the state of Israel. But, according to Andrew White, the doctrine is 'still vibrant' within Roman Catholic and Anglican pews. 'Almost all the Churches hold to replacement theology,' he says.

The catalyst for its re-emergence has been the attempt by Arab Christians to reinterpret Scripture in order to delegitimise the Jews' claim to the land of Israel. This has had a powerful effect upon the Churches which, through humanitarian work among the Palestinians by agencies such as Christian Aid, have been profoundly influenced by two clerics in particular.

The first is the Anglican Bishop at' Jerusalem, Riah Abu El-Assal, a Palestinian who is intemperate in his attacks on Israel. 'We interviewed Bishop Riah after some terrorist outrage in Israel.' says Colin Blakely, 'and his line was that it was all the fault of the Jews. I was astounded.'

The bishop also has an astounding interpretation of the Old Testament, Last December, he claimed of Palestinian Christians, 'We are the true Israel . . . no one can deny me the right to inherit the promises, and after all the promises were first given to Abraham and Abraham is never spoken of in the Bible as a Jew. . . He is the father of the faithful.'

The second cleric, Father Nairn Ateek, is more subtle and highly influential. Although he says that he has come to accept Israel's existence, his brand of radi cal liberation theology undermines it by attempting to sever the special link between God and the Jews.

In a lecture last year Andrew White observed that Palestinian politics and Christian theology had become inextricably intertwined. The Palestinians were viewed as oppressed and the Church had to fight their oppressor, 'Who is the oppressor? The state of Israel. Who is Israel? The Jews. It is they therefore who must be put under pressure so that the oppressed may one day be set free to enter their "Promised Land" which is being denied to them.'

This view, said Andrew White, had now influenced not only whole denominations but also the majority of Christian pilgrimage companies and many of the major mission and Christian aid organisations. One such outfit, he said, had sent every UK bishop a significant document outlining Israel's oppression of the Palestinians, accusing Israel of ethnic cleansing and of systematically 'Judaising' Jerusalem.

David Ison, canon of Exeter cathedral, took a party of pilgrims to the Holy Land in 2000 at the start of the current intifada. They had a Palestinian guide, visited only Christian sites in Arab east Jerusalem and the West Bank, and talked to virtually no Jews. The Old Testament is a horrifying picture of genocide committed in God's name,' he avers. 'And genocide is now being waged in a long, slow way by Zionists against the Palestinians.'

The Bishop of Guildford, who is consistently hostile to Israel, shares the view that the Jews have no particular claim to the Promised Land. Christianity and Islam, he says, can lay equal claim. And although he says that Israel's existence is a reality that must be accepted, his ideal is very different. A separate Palestinian state would be merely a 'first step'.

'Ultimately, one shared land is the vision one would want to pursue, although it's unlikely that this will come about.' As for the Churches' hostility to Israel, his reply is chilling: The problem is that all the power lies with the Israeli state.' So by implication, Israel would merit sympathy for its casualties only if it had no power to defend itself.

The Bishop of Guildford, who chairs Christian Aid, says that he particularly admires Bishop Riah and Naim Ateek. He also warmly endorses a parish priest in his diocese, Stephen Sizer, vicar of Christ Church, Virginia Water.

Sizer is a leading crusader against Christian Zionism. He believes that God's promises to the Jews have been inherited by Christianity, including the land of Israel.

'A return to Jewish nationalism,' he has written, 'would seem incompatible with this New Testament perspective of the international community of Jesus.'

He acknowledges that Israel has the right to exist since it was established by a United Nations resolution. But he also says that it is 'fundamentally an apartheid state because it is based on race' and 'even worse than South Africa' (this, despite the fact that Israeli Arabs have the vote, are members of the Knesset and one is even a supreme court judge).

He therefore hopes that Israel will go the same way as South Africa under apartheid and be 'brought to an end internally by the rising up of the people'. So, despite saying that he supports Israel's existence, he appears to want the Jewish state to be singled out for a fate afforded to no other democracy properly constituted under international law.

But perhaps this is not surprising given his attitude towards Jews. 'The covenant between Jews and God,' he states, 'was conditional on their respect for human rights. The reason they were expelled from the land was that they were more interested in money and power and treated the poor and aliens with contempt.' Today's Jews, it appears, are no better. 'In the United States, politicians dare not criticise Israel because half the funding for both the Democrats and the Republicans comes from Jewish sources.'

A number of authoritative Christian figures are extremely concerned by the elision between criticism of Israel and dislike of the Jews. Rowan Williams says that after a website of the Church in Wales attracted inflammatory language about Jews, and a meeting in Cardiff about Israel provoked similar antiJewish rhetoric, he was forced to introduce some balancing material about the Middle East into his Church periodicals.

Dr Patrick Sookhdeo, the director of the Institute for the Study of Islam and Christianity, has been addressing Christian groups up and down the country on the implications of 11 September. When he suggests that there is a problem with aspects of Islam, he provokes uproar. His audiences blame Israel for Muslim anger; they want to abandon the Jewish state as a 'dead' part of Scripture and support 'justice' for the Palestinians instead. 'What disturbs me at the moment is the very deeply rooted antiSemitism latent in Britain and the West,' he says. simply hadn't realised how deep within the English psyche is this fear of the power and influence of the Jews.'

Since 11 September, he says, the Palestinian issue has had a major distorting impact on the whole of the Christian world. 'Those who blame Israel for everything don't realise that for Islam the very existence of Israel is a problem. Even a Palestinian state would not be sufficient. Israel may be behaving illegally in a number of areas, but she is under attack. But white liberal Christians find it deeply offensive not to blame Israel for injustice.'

The Archbishop of Canterbury, George Carey, has spoken out against replacement theology. But unlike the Roman Catholics, the Anglicans have never been forced to confront their Church's role in the Holocaust and their attitude towards the Jews.

Carey, say Church sources, is now in an invidious position. Under pressure to make an accommodation with the Muslims, he is also hemmed in by some highly placed enemies of Israel within the Church and is reluctant to pick a fight with the establishment view.

Nevertheless, there are many decent Christians who don't hold this view. The network of councils of Christians and Jews is going strong. Archbishop Williams preached in Cardiff's synagogue last weekend. Christians who voice these concerns are prepared to risk opprobrium or worse.

But for the Jews, caught between the Islamists' blood libels on one side and Christian replacement theology on the other, Britain is suddenly a colder place.