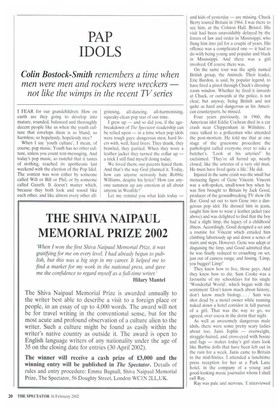 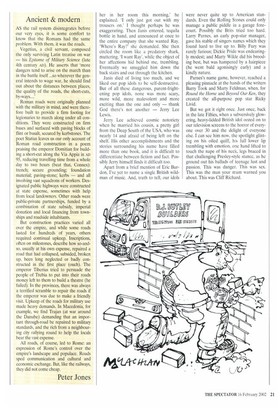 Colin Bostock-Smith remembers a time when

I FEAR for our grandchildren. How on earth are they going to develop into mature, rounded, balanced and thoroughly decent people like us when the youth culture that envelops them is so bland, so harmless, so hopelessly, hopelessly nice?

When I say 'youth culture', I mean, of course, pop music. Youth has no other culture, unless you count text-messaging. And today's pop music, so tasteful that it tastes of nothing, reached its apotheosis last weekend with the election of the Pop Idol. The contest was won either by someone called Will or Bill or Phil, or by someone called Gareth. It doesn't matter which, because they both look and sound like each other, and like almost every other all grinning, all-dancing, all-harmonising, squeaky-clean pop star of our time.

I grew up and so did you, if the agebreakdown of The Spectator readership can be relied upon — in a time when pop idols were tough guys: dangerous men; hard livers with, well, hard livers. They drank, they brawled, they partied. When they wore a leather jacket they turned the collar up — a trick I still find myself doing today.

We loved them; our parents hated them. And that's the way God planned it. Today, how can anyone seriously hate Robbie Williams, despite his lyrics? How can anyone summon up any emotion at all about anyone in Westlife?

Let me remind you what kids today —

and kids of yesterday — are missing. Chuck Berry toured Britain in 1964. I was there to see him, at the Colston Hall, Bristol. His visit had been unavoidably delayed by the forces of law and order in Mississippi, who flung him into jail for a couple of years. His offence was a complicated one — it had to do with being young and popular and black in Mississippi. And there was a girl involved. Of course there was.

On the same tour was the aptly named British group, the Animals. Their leader, Eric Burdon, is said, by popular legend, to have fired a pistol through Chuck's dressingroom window. Whether he fired it inwards at Chuck, or outwards at the police, is not clear, but anyway, being British and not quite as hard and dangerous as his American counterparts, he missed.

Four years previously, in 1960, the American idol Eddie Cochran died in a car crash near Chippenham in Wiltshire. I once talked to a policeman who attended the post-mortem. He told me that at one stage of the gruesome procedure the pathologist called everyone over to take a butcher's. 'Look at his arteries!' he exclaimed. 'They're all furred up, nearly closed, like the arteries of a very old man. He must have lived quite a life.' He did.

Injured in the same crash was the small but menacing figure of Gene Vincent. Vincent was a soft-spoken, small-town boy when he was first brought to Britain by Jack Good, producer of the groundbreaking TV show Oh Boy. Good set out to turn Gene into a dangerous pop idol. He dressed him in jeans, taught him how to wear a leather jacket (see above) and was delighted to find that the boy had a slight limp, the legacy of a childhood illness. Accordingly, Good designed a set and a routine for Vincent which entailed him climbing laboriously up and down a series of stairs and steps. However, Gene was adept at disguising the limp, and Good admitted that he was finally reduced to crouching on set, just out of camera range, and hissing, 'Limp, you bugger! Limp!'

They knew how to live, those guys. And they knew how to die. Sam Cooke was a favourite of my schooldays for his single 'Wonderful World'. which began with the sentiment 'Don't know much about history, don't know much biology.. .' Sam was shot dead by a motel owner while running naked down a hotel corridor in full pursuit of a girl. That was the way to go, we agreed, over cocoa in the dorm that night.

As well as awesomely dangerous male idols, there were some pretty scary ladies about too. Janis Joplin — overweight, straggle-haired, and cross-eyed with booze and fags — makes today's girl stars look like Barbie dolls that have been left out in the rain for a week. Janis came to Britain in the mid-Sixties. I attended a lunchtime press reception for her at a Park Lane hotel, in the company of a young and good-looking music journalist whom I shall call Ray.

Ray was pale and nervous. 'I interviewed her in her room this morning,' he explained. 'I only just got out with my trousers on.' I thought perhaps he was exaggerating. Then Janis entered, tequila bottle in hand, and announced at once to the entire company that she wanted Ray. 'Where's Ray?' she demanded. She then circled the room like a predatory shark, muttering, 'I want Ray', while the object of her affections hid behind me, trembling. Eventually we smuggled him down the back stairs and out through the kitchen.

Janis died of living too much, and we liked our pop idols to be self-destructive. But of all these dangerous, parent-frightening pop idols, none was more scary, more wild, more malevolent and more exciting than the one and only — thank God there's not another — Jerry Lee Lewis.

Jerry Lee achieved cosmic notoriety when he married his cousin, a pretty girl from the Deep South of the USA, who was nearly 14 and afraid of being left on the shelf. His other accomplishments and the stories surrounding his name have filled more than one book, and it is difficult to differentiate between fiction and fact. Possibly Jerry himself finds it difficult too.

Apart from a brief mention of Eric Burdon, I've yet to name a single British wildman of music. And, truth to tell, our idols were never quite up to American standards. Even the Rolling Stones could only manage a public piddle in a garage forecourt. Possibly the Brits tried too hard. Larry Parnes, an early pop-star manager, gave his stable of singers names which they found hard to live up to. Billy Fury was rarely furious; Dickie Pride was endearingly modest; and Marty Wilde did his brooding best, but was hampered by a hairpiece (he went bald agonisingly early) and a kindly nature.

Parnes's name game, however, reached a pleasing pinnacle at the hands of the writers Barry Took and Marty Feldman, when, for Round the Home and Beyond Our Ken, they created the all-purpose pop star Ricky Livid.

But we got it right once. Just once, back in the late Fifties, when a subversively glowering, heavy-lidded British idol oozed on to our television screens to the horror of everyone over 30 and the delight of everyone else. I can see him now, the spotlight glinting on his oiled quiff, his full lower lip trembling with emotion, one hand lifted to touch the nape of his neck, legs braced in that challenging Presley-style stance, as he ground out his ballads of teenage lust and passion. This was danger. This was sex. This was the man your mum warned you about. This was Cliff Richard.