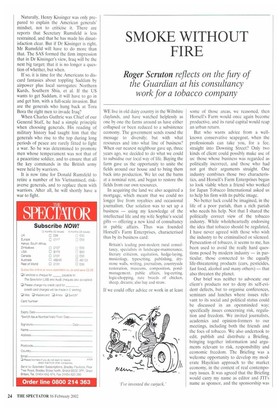 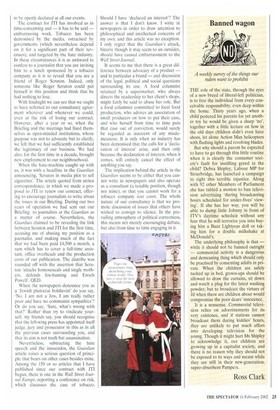 Roger Scruton reflects on the fury of

the Guardian at his consultancy work for a tobacco company

Naturally, Henry Kissinger was only prepared to explain the American generals' mindset, not to criticise it. There are reports that Secretary Rumsfeld is less restrained, and that he has made his dissatisfaction clear. But if Dr Kissinger is right, Mr Rumsfeld will have to do more than that. The SAS formed the firm impression that in Dr Kissinger's view, Iraq will be the next big target; that it is no longer a question of whether, but when.

If so, it is time for the Americans to discard fantasies about toppling Saddam by airpower plus local surrogates: Northern Kurds, Southern Shia, et al. If the US wants to get Saddam, it will have to go in and get him, with a full-scale invasion. But are the generals who hung back at Tora Bora the right men to invade Iraq?

When Charles Guthrie was Chief of our General Staff, he had a simple principle when choosing generals. His reading of military history had taught him that the generals who rise to the top during long periods of peace are rarely fitted to fight a war. So he was determined to promote men whose temperament was not that of a peacetime soldier, and to ensure that all the key commands in the British army were held by warriors.

It is now time for Donald Rumsfeld to retire a number of his Vietnamised, riskaverse generals, and to replace them with warriors. After all, he will shortly have a war to fight. WE live in old dairy country in the Wiltshire claylands, and have watched helplessly as one by one the farms around us have either collapsed or been reduced to a subsistence economy. The government sends round the message to diversify; but with what resources and into what line of business? When our nearest neighbour gave up, three years ago, we decided to do what we could to subsidise our local way of life. Buying the farm gave us the opportunity to unite the fields around our house and to bring them back into production. We let out the barns at a nominal rent, and began to restore the fields from our own resources.

In acquiring the land we also acquired a mortgage, which meant that we could no longer live from royalties and occasional journalism. Our solution was to set up a business — using my knowledge of the intellectual life and my wife Sophie's social gifts — offering a new kind of consultancy in public affairs. Thus was founded Horsell's Farm Enterprises, characterised thus by its business card:

If we could offer advice or work in at least some of those areas, we reasoned, then Horsell's Farm would once again become productive, and its rural capital would reap an urban return.

But who wants advice from a wellknown conservative scapegoat, when the professionals can take you, for a fee, straight into Downing Street? Only two kinds of client could possibly make use of us: those whose business was regarded as politically incorrect, and those who had not got their arguments straight. One industry combines those two characteristics, and Horsell's Farm Enterprises began to look viable when a friend who worked for Japan Tobacco International asked us to help his firm with its public image.

No better luck could be imagined, in the life of a poor pariah, than a rich pariah who needs his help. Not that I shared the politically correct view of the tobacco industry. While wholeheartedly endorsing the idea that tobacco should be regulated, I have never agreed with those who wish the industry to be criminalised or silenced. Persecution of tobacco, it seems to me, has been used to avoid the really hard questions posed by modern industry — in particular, those connected to the equally life-threatening products (cars, pesticides, fast food, alcohol and many others) — that also threaten the planet.

Our brief was neither to advocate our client's products nor to deny its self-evident defects, but to organise conferences, seminars and lunches where issues relevant to its social and political status could be discussed in an openminded way; specifically issues concerning risk, regulation and freedom. We invited journalists, academics and opinion-formers to our meetings, including both the friends and the foes of tobacco. We also undertook to edit, publish and distribute a Briefing, bringing together information and arguments relevant to risk, responsibility and economic freedom. The Briefing was a welcome opportunity to develop my moderate Hayekian approach to the market economy, in the context of real contemporary issues. It was agreed that the Briefing would carry my name as editor and JTI's name as sponsor, and the sponsorship was to be openly declared at all our events.

The contract for JTI has involved us in time-consuming and — it has to be said — embarrassing work. Tobacco has been demonised by the media, ostracised by governments (which nevertheless depend on it for a significant part of their revenues), and targeted by the hate industry. In these circumstances it is as awkward to confess to a journalist that you are inviting him to a lunch sponsored by a tobacco company as it is to reveal that you are a friend of Roger Scruton. Indeed, only someone like Roger Scruton could put himself in this position and think that he had nothing to lose.

With hindsight we can see that we ought to have referred to our consultancy agreement wherever and whenever we could, even at the risk of losing our contract. However, after a year or so, when the Briefing and the meetings had fixed themselves as open-minded institutions, whose purpose was not to advocate but to clarify, we felt that we had sufficiently established the legitimacy of our business. We had also, for the first time in a decade, brought new employment to our neighbourhood.

When the hate-machine caught up with us, it was with a headline in the Guardian announcing, `Scruton in media plot to sell cigarettes'. The article quoted from stolen correspondence, in which we made a proposal to JTI to renew our contract, offering to encourage journalists to write about the issues in our Briefing. During our two years of operation we had sent out our Briefing to journalists at the Guardian as a matter of course. Nevertheless, the Guardian claimed to be revealing the link between Scruton and JTI for the first time, accusing me of abusing my position as a journalist, and making much of the fact that we had been paid £4,500 a month, a sum which has to cover a full-time assistant, office overheads and the production costs of our publication. The diatribe was rounded off with the assertion that Scruton 'attacks homosexuals and single mothers, defends fox-hunting and Enoch Powell'. QED.

When the newspapers denounce you as a 'Jewish plutocrat bolshevist' do you say, 'No. I am not a Jew, I am really rather poor and have no communist sympathies'? Or do you say, 'Sure, what's wrong with that?' Rather than try to vindicate yourself, my friends say, you should recognise that the left-wing press has appointed itself judge, jury and prosecutor in this as in all the previous cases surrounding you, and that its aim is not truth but assassination.

Nevertheless, subtracting the hate speech and the innuendos, the Guardian article raises a serious question of principle that bears on other eases besides mine. Among the 150 or so articles that I have published since our contract with JTI began, there is one in the Wall Street Journal Europe, reporting a conference on risk, which discusses the case of tobacco.

Should I have 'declared an interest'? The answer is that I don't know, I write in newspapers in order to draw attention to philosophical and intellectual concerns of my own, and this article was no exception. I only regret that the Guardian's attack, bizarre though it may seem to an outsider, should have caused embarrassment to the Wall Street Journal.

It seems to me that there is a great difference between advocacy of a product — and in particular a brand — and discussion of the legal, political and social questions surrounding its use. A food columnist retained by a supermarket, who always directs the readership to her client's shops, might fairly be said to abuse her role. But a food columnist committed to local food production, who advises an association of small producers on how to put their case, and who herself from time to time puts that case out of conviction, would surely be regarded as innocent of any misdemeanour. It is only when an industry has been demonised that the calls for a 'declaration of interest' arise, and then only because the declaration of interest, when it comes, will entirely cancel the effect of anything you say.

The implication behind the article in the Guardian seems to be either that you cannot write in newspapers and also operate as a consultant (a tenable position, though not mine), or that you cannot work for a tobacco company tout court. The whole nature of our consultancy is that we promote discussion of issues that others have wished to consign to silence. In the prevailing atmosphere of political correctness, this means not merely encouraging debate, but also from time to time engaging in it.