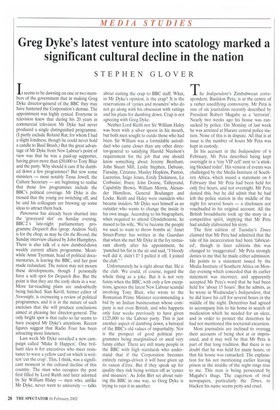 It seems to be dawning on one or two members of the government that in making Greg Dyke director-general of the BBC they may have hastened the Corporation's demise. The appointment was highly cynical. Everyone in television knew that during his 20 years in commercial television Mr Dyke had never produced a single distinguished programme. (I partly exclude Roland Rat, for whom I had a slight fondness, though he could never hold a candle to Basil Brush.) But the great advantage of Mr Dyke from New Labour's point of view was that he was a paid-up supporter, having given more than £50,000 to Tony Blair and the party. Why should it care if he dumbed down a few programmes? But now some ministers — most notably Tessa Jowell, the Culture Secretary — are beginning to realise that those few programmes include the BBC's political coverage. Mr Dyke is distressed that the young are switching off, and he and his colleagues are brewing up some ideas to attract them back.

Panorama has already been shunted into the 'graveyard slot' on Sunday evening. BBC 2's late-night parliamentary programme Despatch Box (prop: Andrew Neil) is for the chop, as may be On the Record, the Sunday interview chaired by John Humphrys. There is also talk of a new dumbed-down weekly current affairs programme. Meanwhile Anne Tyerman, head of political documentaries, is leaving the BBC, and her post made redundant. The nation may not mourn these developments, though I personally have a soft spot for Despatch Box. But the point is that they are the early shots in a war. More far-reaching plans are undoubtedly being hatched. Sian Kevill, former editor of Newsnight, is overseeing a review of political programmes, and it is in the nature of such exercises that she will produce conclusions aimed at pleasing her director-general. The only bright spot is that radio so far seems to have escaped Mr Dyke's attentions. Recent figures suggest that Radio Four has been attracting more listeners.

Last week Mr Dyke unveiled a new campaign called 'Make It Happen'. One brilliant idea is for executives who meet resistance to wave a yellow card on which is written 'cut the crap'. This, I think, was a significant moment in the cultural decline of this country. The man who occupies the post first filled by Lord Reith and later adorned by Sir William Haley — men who, unlike Mr Dyke, never went to university — talks about cutting the crap to BBC staff. What, in Mr Dyke's opinion, is the crap? It is the reservations of 'cynics and moaners' who do not go along with his obsession with ratings and his plans for dumbing down. Crap is not agreeing with Greg Dyke.

Neither Lord Reith nor Sir William Haley was born with a silver spoon in his mouth, but both men sought to outdo those who had been. Sir William was a formidable autodidact who came closer than any other director-general to satisfying Harold Nicolson's requirement for the job that one should know something about Jeremy Bentham, John Stuart Mill, Leslie Stephen, Debussy, Faraday, Cezanne, Manley Hopkins, Paxton, Lucretius, Inigo Jones, Emily Dickinson, Le Corbusier, Ibsen, John Donne, Talleyrand, Capability Brown, William Morris, Alexander Hamilton, General Boulanger and Locke. Reith and Haley were outsiders who became insiders. Mr Dyke sees himself as an outsider who wants to change the inside in his own image. According to his biographers, when required to attend Glyndebourne, he mused to his wife, 'We've become the people we used to want to throw bombs at.' Janet Street-Porter has written in the Guardian that when she met Mr Dyke in the Ivy restaurant shortly after his appointment, he `punched his fist in the air and said, "I bloody well did it, didn't I? I pulled it off. I joined the club."'

Unfortunately he is right about that. He is the club. We could, of course, regard the whole thing as a joke. But it is not very funny when the BBC, with only a few exceptions, ignores the latest New Labour scandal involving Tony Blair, who wrote to the Romanian Prime Minister recommending a bid by an Indian businessman whose company is not even British, and who happens only four weeks previously to have given £125,000 to the Labour party. This is just another aspect of dumbing down, a betrayal of the BBC's old values of impartiality. Nor is the prospect of good political programmes being marginalised or axed very funny either. There are still many people in the BBC with high standards who understand that if the Corporation becomes entirely ratings-driven it will have given up its raison d'être. But if they speak up for quality they risk being written off as 'cynics and moaners'. As John Birt set about ruining the BBC in one way, so Greg Dyke is trying to ruin it in another.

The Independent's Zimbabwean correspondent, Basildon Peta, is at the centre of a rather unedifying controversy. Mr Peta is one of six journalists recently described by President Robert Mugabe as a `terrorist'. Nearly two weeks ago his house was ransacked by police. On Monday of last week he was arrested at Harare central police station. None of this is in dispute. All that is at issue is the number of hours Mr Peta was kept in custody.

In his account in the Independent of 6 February, Mr Peta described being kept overnight in a `tiny VIP cell' next to `a stinking blocked toilet'. His version of events was challenged by the Media Institute of Southern Africa, which issued a statement on 8 February that Mr Peta had been held for only five hours, and not overnight. Mr Peta denied this, but he did admit that he had left the police station in the middle of the night for several hours — a disclosure not vouchsafed in his original account. All the British broadsheets took up the story in a competitive spirit, implying that Mr Peta had unduly elaborated his story.

The first edition of Tuesday's Times claimed that Mr Peta had admitted that the tale of his incarceration had been 'fabricated', though in later editions this was changed to 'exaggerated'. Mr Peta strongly denies to me that he made either admission. He points to a statement issued by the Media Institute of Southern Africa on Monday evening which conceded that its earlier statement was incorrect, and apparently accepted Mr Peta's word that he had been held for 'about 15 hours'. But he admits, as he wrote in Wednesday's Independent, that he did leave his cell for several hours in the middle of the night. Detectives had agreed to accompany him to his home in search of medication which he needed for an ulcer, and in order to protect the detectives he had not mentioned this nocturnal excursion.

Most journalists are inclined to overegg their accounts of being shot at or imprisoned, and it may well be that Mr Peta is part of that long tradition. But there is no doubt that he was held for many hours, or that his house was ransacked. The explanation for his not mentioning earlier leaving prison in the middle of the night rings true to me. This man is being persecuted by Mugabe's thugs. The eagerness of rival newspapers, particularly the Times, to blacken his name seems petty and cruel.