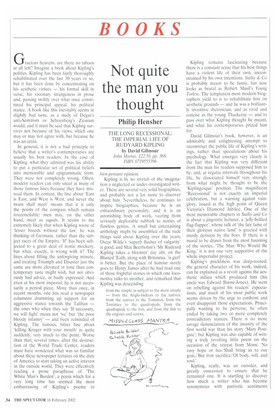 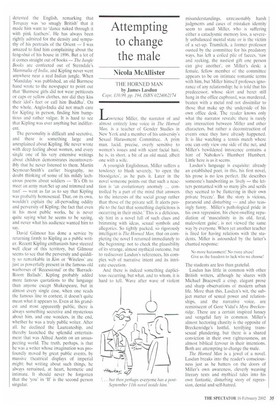 Not quite the man you thought

THE LONG RECESSIONAL: THE IMPERIAL LIFE OF RUDYARD KIPLING by David Gilmour John Murray, 122.50, pp. 368, ISBN 07195553% Gracious heavens, are there no taboos at all left? Imagine a book about Kipling's politics. Kipling has been fairly thoroughly rehabilitated over the last 30 years or so, but it has been done by concentrating on his aesthetic virtues — his formal skill in verse, his visionary strangeness in prose and, passing swiftly over what once constituted his principal appeal, his political stance. A book like this inevitably seems in slightly bad taste, as a study of Degas's anti-Semitism or Schoenberg's Zionism would, and it must be said that Kipling survives not because of his views, which one may or may not agree with, but because he was an artist. In general, it is not a bad principle to believe that a writer's contemporaries are usually his best readers. In the case of Kipling, what they admired was his ability to put a particular set of political beliefs into memorable and epigrammatic form. They were not completely wrong. Often, modern readers can only sneer at many of those famous lines because they have misread them. In context, the line about 'East is East, and West is West, and never the twain shall meet' means that it is only the points of the compass which remain irreconcilable; men may, on the other hand, meet as equals. It seems to rue extremely likely that when Kipling wrote of 'lesser breeds without the law' he was thinking of Germans, rather than the subject races of the Empire. 'If has been subjected to a great deal of ironic mockery, but what, exactly, is wrong with it? The lines about filling the unforgiving minute, and treating Triumph and Disaster just the same are more elevated in tone than contemporary taste might wish, but not obviously bad advice, or badly expressed. And even at his most imperial, he is not necessarily a period piece. More than once, in recent months, one has read a newspaper columnist drumming up support for an aggressive stance towards the Taliban — the ones who when they say 'If necessary, we will fight' mean not 'we' but 'the poor bloody infantry' — and been reminded of Kipling. The famous, bitter line about 'killing Kruger with your mouth' is, quite suddenly, very much to the point. Worse than that; several times, after the destruction of the World Trade Center, readers must have wondered what was so familiar about these newspaper lectures on the duty of America to start taking an active interest in the outside world. They were effectively reading a prose paraphrase of 'The White Man's Burden', a poem which for a very long time has seemed the most embarrassing of Kipling's poems to

Kipling is by no stretch of the imagination a neglected or under-investigated writer. There are several very solid biographies, and probably not a lot more to discover about him. Nevertheless, he continues to inspire biographies, because he is an extraordinary personality, and it is an astonishing body of work, veering from seriously deplorable rubbish to stories of flawless genius. A small but entertaining anthology might be assembled of the rude things said about Kipling over the years; Oscar Wilde's 'superb flashes of vulgarity' is good, and Max Beerbohm's 'Mr Rudyard Kipling takes a bloomin' day aht, on the Blasted 'Eath, along with Britannia, 'is gurl' is better, But the place of honour surely goes to Henry James after he had read one of those frightful stories in which one locomotive talks to another, and remarked that Kipling was descending

Kipling remains fascinating because there is a constant sense that his best things have a violent life of their own, unconstrained by his own intentions. Stalky & Co is probably meant to be funny, but now looks as brutal as Robert Musil's Young Torless. The temptation most modern biographers yield to is to rehabilitate him on aesthetic grounds — and he was a brilliantly inventive rhetorician. and as vivid and concise as the young Thackeray — and to pass over what Kipling thought he meant, and what his contemporaries prized him for. David Gilmour's book, however, is an admirable and enlightening attempt to reconstruct the public life of Kipling's writings, rather than speculations about his psychology. What emerges very clearly is the fact that Kipling was very different from the man his readers supposed him to be, and, at regular intervals throughout his life, he dissociated himself very strongly from what might be thought to be the `Kiplingesque' position. The magnificent 'Recessional' is not exactly an imperial celebration, but a warning against vainglory, issued at the high point of Queen Victoria's Diamond Jubilee. One of the most memorable chapters in Stalky and Co is about a jingoistic lecturer, a 'jelly-bellied flag-flapper', whose talk of 'the fair fame of their glorious native land' is greeted with sturdy derision by the boys. If there is a moral to be drawn from the most haunting of the stories, The Man Who Would Be King,' it is not one very supportive of the whole imperialist project. Kipling's prickliness was deep-rooted; the general character of his work, indeed, can be explained as a revolt against the aesthetic milieu which produced him (his uncle was Edward Burne-Jones). He went on rebelling against his readers' expectations, and much of his most public work seems driven by the urge to confront and even disappoint those expectations. Principally wanting to be perverse. he often ended by taking two or more completely contradictory stances. There is no more savage denunciation of the insanity of the first world war than his story 'Mary Postgate': but Kipling was also capable of writing a truly revolting little poem on the occasion of the retreat from Mons: 'No easy hope or lies/ Shall bring us to our goal,/ But iron sacrifice/ Of body, will, and soul.'

Kipling, really, was an outsider, and greatly concerned to ensure that he remained one. It is startling to discover how much a writer who has become synonymous with patriotic sentiments detested the English, remarking that Torquay was 'so smugly British' that it made him want to 'dance naked through it with pink feathers'. He has always been rightly admired for the density and sympathy of his portraits of the Orient — I was amazed to find him complaining about the feng-shui of his house in 1896. But a lot of it comes straight out of books — The Jungle Books are confected out of Sternclale's Mammalia of India, and Kipling never went anywhere near a real Indian jungle. When 'Mandalay' was published, an old Burmese hand wrote to the newspaper to point out that 'Burmese girls did not wear petticoats or caps or yellow clothes, nor did they kiss their idol's feet or call him Buddha'. On the whole. Anglo-India did not much care for Kipling in person, finding him bumptious and rather vulgar. It is hard to see that Kipling was ever anything but indifferent.

The personality is difficult and secretive, and there is something large and unexplained about Kipling. He never wrote with deep feeling about women, and every single one of his very extensive writings about children demonstrates incontrovertibly that he never listened to them. Martin Seymour-Smith's earlier biography, no doubt thinking of some of his mildly lecherous poems about soldiers — 'It's Oh to meet an army man/Set up and trimmed and tauf — went as far as to say that Kipling was probably homosexual. That, on its own, wouldn't explain the all-pervading oddity and perversity of Kipling; the fact that even in his most public works, he is never quite saying what he seems to be saying, and never what his audience wanted him to say.

David Gilmour has done a service by returning firmly to Kipling as a public writer. Recent Kipling enthusiasts have steered well clear of this territory, but Gilmour seems to see that the perversity and quiddity so remarkable in Kim or 'Wireless' are just as powerfully present in the famous old warhorses of `Recessional' or the 'BarrackRoom Ballads'. Kipling probably added more famous quotations to the language than anyone except Shakespeare, but in almost every single case, when one reads the famous line in context, it doesn't quite mean what it appears to. Even at his grandest and most apparently public, there is always something secretive and mysterious about him, and one wonders, in the end, whether he was a truly public writer. After all, he declined the Laureateship, and thereby launched the splendid entertainment that was Alfred Austin on an unsuspecting world, The truth, perhaps, is that he was a writer whose imagination was profoundly moved by great public events, by massive theatrical displays of imperial might: but writing about such things, he always remained, at heart, hermetic and intimate. It should never be forgotten that the 'you' in 'If is the second person singular.