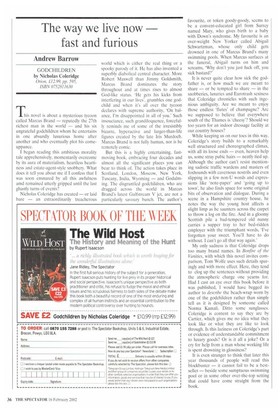 The way we live now — fast and furious

GODCHILDREN by Nicholas Coleridge Orion, £12.99, pp. 595, ISBN 0752811630 his novel is about a mysterious tycoon called Marcus Brand — reputedly the 27th richest man in the world — and his six ungrateful godchildren whom he entertains in one absurdly luxurious home after another and who eventually plot his comeuppance.

I began reading this ambitious morality tale apprehensively, momentarily overcome by its aura of materialism, heartless heartiness and estate-agent-style snobbery. What does it tell you about me if I confess that I was soon ensnared by all this awfulness amd remained utterly gripped until the last ghastly turns of events?

Nicholas Coleridge has created — or laid bare — an extraordinarily treacherous

world which is either the real thing or a spooky parody of it. He has also invented a superbly diabolical central character. More Robert Maxwell than Jimmy Goldsmith, Marcus Brand dominates the story throughout and at times rises to almost God-like status. 'He gets his kicks from interfering in our lives', grumbles one godchild and when it's all over the tycoon declares with supreme authority, 'On balance, I'm disappointed in all of you.' Such insouciance, such grandiloquence, forcefully reminds me of some of the irresistibly bizarre, hyperactive and larger-than-life figures created by the late Iris Murdoch. Marcus Brand is not fully human, nor is he remotely comic.

But this is a highly entertaining, fastmoving book, embracing four decades and almost all the significant places you can bear to think of. The action takes place in Scotland, London, Moscow, New York, Tuscany, India, Wyoming — and Godalming. The disgruntled godchildren, who are dragged across the world in Marcus Brand's latest Gulfstream V jet, are not a particularly savoury bunch. The author s favourite, or token goody-goody, seems to be a convent-educated girl from Surrey named Mary, who gives birth to a baby with Down's syndrome. My favourite is an over-weight New Yorker called Abigail Schwartzman, whose only child gets drowned in one of Marcus Brand's many swimming pools. When Marcus surfaces at the funeral, Abigail turns on him and screams, `Why don't you just fuck off, you sick bastard?'

It is never quite clear how sick the godfather is, or how much we are meant to share — or be tempted to share — in the snobberies, luxuries and Eurotrash sexiness that Coleridge chronicles with such ingenious ambiguity. Are we meant to enjoy those endless `flutes' of champagne? Are we supposed to believe that everywhere south of the Thames is 'cheesy'? Should we too yearn for an indoor dressage facility at our country houses?

While keeping us on our toes in this way, Coleridge's story builds to a remarkably well structured and choreographed climax, with all its loose ends — even, heaven help us, some stray pubic hairs — neatly tied up. Although the author can't resist mentioning sadistic traffic wardens and masters of foxhounds with cavernous nostrils and even slipping in a few non-U words and expressions like 'note-paper' and 'going up to town', he also finds space for some original bits of observation and dialogue. During a scene in a Hampshire country house, he notes the way the young host affects a slight limp as he saunters across the carpet to throw a log on the fire. And in a gloomy Scottish pile a bad-tempered old nanny carries a supper tray to her bed-ridden employer with the triumphant words, 'I've forgotten your sweet. You'll have to do without. I can't go all that way again.'

My only sadness is that Coleridge drops too many brand names. In Bonfire of the Vanities, with which this novel invites comparison. Tom Wolfe uses such details sparingly and with more effect. Here, they tend to clog up the sentences without providing the atmospheric charge one yearns for, Had I cast an eye over this book before it was published, I would have begged its author to describe the beach-wrap worn by one of the godchildren rather than simply tell us it is designed by someone called Norma Kamali. Ditto some sunglasses. Coleridge is content to say they are by Cartier, which gives me no idea what they look like or what they are like to look through. Is this laziness on Coleridge's part or evidence of understandable commitment to luxury goods? Or is it all a joke? Or a cry for help from a man whose working life is spent drowning in glossiness?

It is even stranger to think that later this year thousands of people will read this blockbuster — it cannot fail to be a bestseller — beside some sumptuous swimming pool or in some other over-the-top setting that could have come straight from the book.