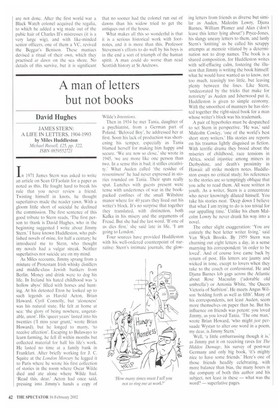 A man of letters but not books

JAMES STERN: A LIFE IN LETTERS, 1904-1993 by Miles Huddleston Michael Russell, £25, pp, 322, ISBN 0859552721 In 1971 James Stern was asked to write an article on Sean O'Faolain for a paper as noted as this. He fought hard to break his rule that you never review a friend. Twisting himself in knots, he thought superlatives made the reader yawn. With a gloom little short of suicidal he declined the commission. The first sentence of this good tribute to Stern reads, 'The first person to thank is David Hughes, who in the beginning suggested I write about Jimmy Stern.' I have known Huddleston, who published novels of mine, for half a century; he introduced me to Stern, who thought my novels had a vulgar streak. Neither superlatives nor suicide are on my mind.

As Miles recounts, Jimmy sprang from a mixture of Protestant Irish whisky distillers and middle-class Jewish bankers from Berlin. Money and drink were to dog his life. In Ireland his hated childhood was 'a hollow abyss' filled with horses and hunting. At his detested Eton he looked up to such legends as Harold Acton, Brian Howard, Cyril Connolly, but 'aloneness' was his natural state. He felt at home at sea: 'the glory of being nowhere, ungetatable, anon'. His 'queer years' lasted into his twenties ('I miss your grunt,' wrote Brian Howard), but he longed to marry, 'to receive affection'. Escaping to Bulawayo to learn farming, he fell ill within months but collected material for half his life's work. He lasted no time at a family bank in Frankfurt. After briefly working for J. C. Squire at the London Mercury he legged it to Paris where he wrote his first collection of stories in the room where Oscar Wilde died and ate alone where Wilde had. 'Read this, dear,' Acton had once said, pressing into Jimmy's hands a copy of Wilde's Intentions, Then in 1934 he met Tania, daughter of a psychiatrist, from a German part of Poland. 'Beloved Boy', he addressed her at first. Soon his lack of production was shortening his temper, especially as Tania blamed herself for making him happy and secure. 'We are now so close,' she wrote in 1945, 'we are more like one person than two. In a sense this is bad; it stifles creativity.' What Auden called 'the residue of ressentiment' he had never expressed in stories rounded on Tania. Their spats really spat. Lunches with guests present were tense with undertones of war in the bookpacked confines of the small Wiltshire manor where for 40 years they lived out his writer's block. It's no surprise that together they translated, with distinction, both Kafka in his misery and the arguments of Freud. But she had the last word. 'If one of us dies first,' she said late in life, 'I am going to London.'

Four sources have provided Huddleston with his well-ordered counterpoint of narrative: Stern's intimate journals, the glow

ing letters from friends as diverse but similar as Auden, Malcolm Lowry, Djuna Barnes, William Plomer and Alan ('don't leave this letter lying about!') Pryce-Jones, his slangy uneasy letters to them, and lastly Stern's 'knitting' as he called his scrappy attempts at memoir vitiated by a determination not to drop names. The book is a shared composition, for Huddleston writes with self-effacing calm, fostering the illusion that Jimmy is writing the book himself: what he would have wanted us to know, not too much, teasingly too little, but leaving plenty between the lines. Like Stern, 'undecorated by the tricks that make for notoriety' as Auden and Isherwood put it, Huddleston is given to simple economy. With the smoothest of manners he has slotted together the right-sized book for a man whose writer's block was his trademark.

A pair of hyperboles must be despatched to set Stern in perspective. 'He was,' said Malcolm Cowley, 'one of the world's best short story writers.' His stories are reports on his traumas lightly disguised as fiction. With terrific drama they brood about the miseries of childhood, race tensions in Africa, social injustice among miners in Derbyshire, and death's proximity in Hawaii: all strike modern notes. Huddleston essays no critical study; his references to the stories are so temptingly oblique that you ache to read them. All were written in youth. As a writer, Stern is a concentrate who never knowingly diluted himself. You take his stories neat. 'Deep down I believe that what I am trying to do is too trivial for our appalling time.' Unlike his chum Malcolm Lowry he never drank his way into a novel.

The other slight exaggeration: You are entirely the best letter writer living,' said Van Wyck Brooks. By 1959 Stern was churning out eight letters a day, in a sense marrying his correspondent 'in order to be loved'. And of course love came back by return of post. His letters are jaunty and wicked in tone, except to lovers when they take to the couch or confessional. He and Djuna Barnes lob gags across the Atlantic about Rose Macaulay ('adorable old umbrella') or Antonia White, 'the Queen Victoria of Surbiton'. He meets Angus Wilson 'holding forth as well as fifth'. Many of his correspondents, not least Auden, seem more themselves on paper than he. But his influence on friends was potent: you loved Jimmy, as you loved Tania. 'The one man,' wrote Brian Howard, 'who might just persuade Wystan to alter one word in a poem, my dear. is Jimmy Stern.'

Well. 'a little embarrassing though it is,' as Jimmy put it on receiving raves for The Hidden Damage, his survey of post-war Germany and only big book, 'it's mighty nice to have some friends.' Here's one of those friends headily celebrating, with more balance than bias, the many hours in the company of both this author and his subject, not least in these — what was the word? — superlative pages.