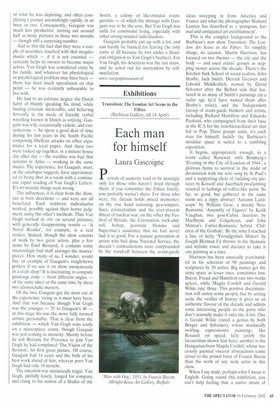 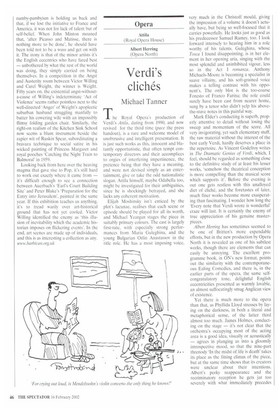 Transition: The London Art Scene in the Fifties (Barbican Gallery, till 14 April)

Each man for himself

Periods of austerity tend to be nostalgic only for those who haven't lived through them: if you remember the Fifties fondly, you probably weren't there. For those who were, the decade holds mixed memories: on the one hand rationing, pea-soupers, Suez, existentialism and the ever-present threat of nuclear war; on the other the Festival of Britain. the Coronation, rock-androll, bebop, peroxide blondes and Supermac's assurance that we had never had it so good. For a mature generation of artists who had done National Service, the decade's contradictions were compounded by the stand-off between the avant-garde

ideas sweeping in from America and France and what the photographer Richard Lannoy has described as a 'pompous, formal and antiquated art establishment'.

This is the complex background to the Barbican's new show Transition: The London Art Scene in the Fifties. To simplify things, its curator, Martin Harrison, has focused on two themes — the city and the body — and used artists' groups as stepping stones across the decade. There's the Kitchen Sink School of social realists. John Bratby, Jack Smith, Derrick Greaves and Edward Middleditch, named by David Sylvester after the Belfast sink that featured in so many of Smith's paintings (in a ruder age he'd have named them after Bratby's toilet), and the Independent Group of avant-garde thinkers and artists, including Richard Hamilton and Eduardo Paolozzi, who campaigned from their base at the ICA for the non-hierarchical art that led to Pop. These groups aside, it's each man for himself; luckily the Barbican's modular space is suited to a rambling exposition.

It begins, appropriately enough, in a room called Renewal, with Bomberg's 'Evening in the City of London of 1944', a glorious hymn to survival in the midst of devastation with the solo sung by St Paul's and a supporting choir of building-site pictures by Kossoff and Auerbach proclaiming renewal in lashings of toffee-like paint. So far, so good, but gathered in the same room are a zippy abstract 'Autumn Landscape' by William Gear, a moody NeoRomantic 'Assembly of Figures' by Keith Vaughan, two post-Cubist interiors by MacBryde and Colquhoun, and John Minton's Cubist-Romantic hybrid 'Children of the Gorbals'. By the time I reached a line of hefty 'Ystradgynlais Miners' by Joseph Herman I'd thrown in the thematic and stylistic towel and decided to take it one painting at a time.

Harrison has been unusually even-handed in his selection of 90 paintings and sculptures by 50 artists. Big names get the same space as lesser ones, sometimes less: Bacon, Freud and Hamilton rate two works apiece, while Magda Cordell and Gerald Wilde rate three. This positive discrimination will annoy some people, but by setting aside the verdict of history it gives us an authentic flavour of the decade and admits some interesting people to the party who don't normally make it onto the A list. One is Gerald Wilde (rated a genius by both Berger and Sylvester), whose maniacally swirling expressionist paintings, like Rouault on speed, fully justify the favouritism shown him here; another is the Hungarian-born Magda Cordell, whose lusciously painted visceral abstractions come closer to the primal force of Francis Bacon than the work of any male artist in this show.

When I say male, perhaps what I mean is English. Going round this exhibition, you can't help feeling that a native strain of

namby-pambyism is holding us back and that, if we lost the initiative to France and America, it was not for lack of talent but of self-belief. When John Minton moaned that, 'after Picasso and Matisse, there is nothing more to be done', he should have been told not to be a wuss and get on with it. The irony is that of the minor artists it's the English eccentrics who have fared best — unbothered by what the rest of the world was doing, they simply carried on being themselves. In a competition in the Angst and Austerity room between Victor Willing and Card l Weight, the winner is Weight. Fifty years on. the existential angst-withouta-cause of Willing's indeterminate 'Act of Violence' seems rather pointless next to the well-directed 'Anger' of Weight's apoplectic suburban husband struggling manfully to batter his cowering wife with an impossibly flimsy folding garden chair. Similarly, the right-on realism of the Kitchen Sink School now seems a blunt instrument beside the rapier wit of Ruskin Spear, subordinating a bravura technique to social satire in his wicked painting of Princess Margaret and royal pooches 'Catching the Night Train to Balmoral' in 1959.

Looking back from here over the heaving magma that gave rise to Pop, it's still hard to work out exactly where it came from — it's difficult enough to see a connection between Auerbach's 'Earl's Court Building Site' and Peter Blake's 'Preparation for the Entry into Jerusalem', painted in the same year. If this exhibition teaches us anything, it's to tread warily over art-historical ground that has not yet cooled. Victor Willing identified the enemy as 'this illusion of inevitability which the academic historian imposes on flickering events'. In the end, art scenes are made up of individuals, and this is as interesting a collection as any. www.barbican.olg.uk