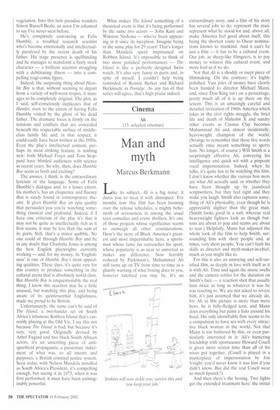 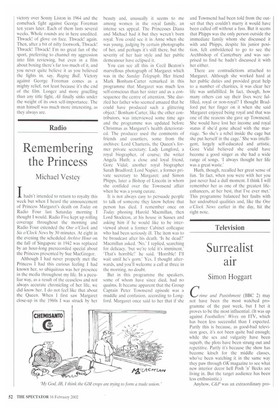 Like its subject, Ali is a big noise: it dares you to treat it with disrespect. For months now this film has been looming over the release schedules, a mighty behemoth of seriousness in among the usual teen comedies and crime thrillers. It's one of those projects whose significance seems to outweigh all other considerations. Here's the story of Black America's greatest and most imperishable hero, a sportsman whose fame far outreaches his sport, whose popularity is as near to universal as makes any difference. Now horribly reduced by Parkinson's, Muhammad Ali still turns up on TV from time to time as a ghastly warning of what boxing does to you, however talented you may be. It's an

extraordinary story, and a film of his story has several jobs to do: represent the man, represent what he stood for and, above all, make America feel good about itself, this being the shortest route to Oscar nominations known to mankind. And it can't be just a film — it has to be a cultural event. Our job. as sheep-like filmgoers, is to pay money to witness this cultural event, and more fool us if we do.

Not that Ali is a shoddy or inept piece of filmmaking. On the contrary: it's highly polished. Vast piles of money have clearly been handed to director Michael Mann, and, since Don King isn't on a percentage, pretty much all of it is up there on the screen. This is an amazingly careful and detailed recreation of 1960s America which takes in the civil rights struggle, the brief life and death of Malcolm X and sundry other events as Cassius Clay becomes Muhammad Ali and, almost incidentally, heavyweight champion of the world. (Strange to remember that these five words actually once meant something to sports fans. No longer, of course.) Will Smith is a surprisingly effective Ali, conveying his intelligence and quick wit with a pinpoint vocal impersonation. Indeed, when he talks, it's quite fun to be watching this film. I don't know whether the various bon mots are what Ali actually said, or whether they have been thought up by jaundiced scriptwriters, but they feel right and they make you laugh. Smith also captures something of Ali's physicality, even though he is appreciably slighter than the great man. (Smith looks good in a suit, whereas real heavyweight fighters look as though buttons are about to pop and seams are about to tear.) Helpfully, Mann has adjusted the whole look of the film to help Smith, surrounding him with short people and, at times, very short people. You can't fault his skills as director and myth-maker-in-chief. much as you might like to.

For this is also an annoying and self-satisfied film, as deeply in love with itself as it is with Ali. Time and again the music swells and the camera settles for the duration on Smith's face — a reaction shot that usually lasts twice as long as whatever it was he was reacting to. We are not asked to revere him, it's just assumed that we already do, for Ali in this picture is more than mere hero, he is fully-fledged icon, and Mann does everything but paint a halo around his head. His only identifiable flaw seems to be a compulsion to have sex with every attractive black woman in the world. Not that Mann is too bothered by this, or even particularly interested in it: Al's bantering friendship with sportscaster Howard Cosell is given more screen time than all of his wives put together. (Cosell is played in a masterpiece of impersonation by Jon Voight: you'd never know it was him if you didn't know. But did the real Cosell wear so much lipstick?) And then there's the boxing. Two fights get the extended treatment here: the initial victory over Sonny Liston in 1964 and the comeback fight against George Foreman ten years later. Each of them lasts several weeks. Whole rounds are in here unedited. Thwack! of glove on face. Thwack! again. Then, after a bit of nifty footwork, Thwack! Thwack! Thwack! I'm no great fan of the sport, preferring to channel my aggression into film reviewing, but even in a film about boxing there's far too much of it, and you never quite believe it as you believed the fights in, say, Raging Bull. Victory against George Foreman comes as a mighty relief, not least because it's the end of the film. Longer and more gruelling than any title fight, Ali finally sinks under the weight of its own self-importance. The man himself was much more interesting, as they always are.