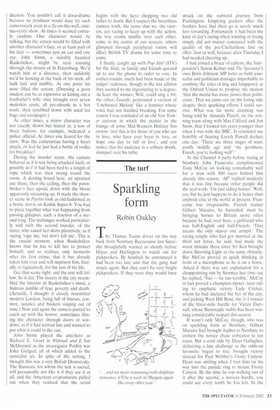 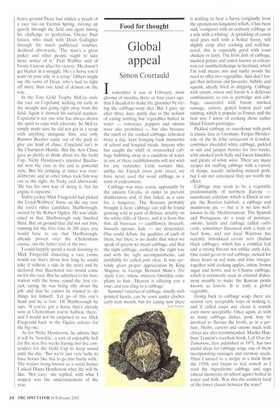 The Thames Trains driver on the way back from Newbury Racecourse last Saturday thoughtfully warned us shortly before Hayes and Harlington to watch out for pickpockets. By Southall he announced it had been too late and that the gang had struck again. But they can't be very bright pickpockets. If they were they would have

struck on the outward journey from Paddington. Emptying pockets after the bookies have had their go is surely much less rewarding. Fortunately it had been the kind of day's racing when winning or losing simply did not matter compared with the quality of the pre-Cheltenham fare on offer, Just as well, because after Thursday I had needed cheering up.

I had joined a brace of editors, the Independent's Simon Kelner and The Spectator's own Boris Johnson MP (who as both journalist and politician manages improbably to combine the roles of dog and lamppost), at the Oxford Union to propose the motion 'that the media has more power than politicians'. That we came out on the losing side despite their sparkling efforts I could survive. What was far more alarming was being told by Amanda Platell, on the winning team along with Max Clifford and Jon Snow. that I looked ten years younger than when I was with the BBC. It reminded me horribly of hearing Enoch Powell declare one day: 'There are three stages of man: youth, middle age and "my goodness, Enoch, you're looking well".'

At the Channel 4 party before racing at Newbury John Francome complimented Tony McCoy on looking remarkably well for a man with 800 races behind him already this season. 'AP' replied modestly that it was fine because other people did the real work: 'I'm just riding horses.' Well, yes, but he just happens to do it better than anybody else in the world at present. Francome was irrepressible. French trainer Gilbert Macaire, he hazarded, must be bringing horses to Britain more often because he had, over here, a girlfriend who was half-English and half-French: 'That means she only shaves one armpit.' The racing couple who had got married at the third last fence, he said, had made the worst mistake there since Sir Ken brought down Shooting Light at the same obstacle. But McCoy proved as quick thinking in front of a microphone as he is on a horse. Asked if there was any explanation for a disappointing run by Stormez last time out he replied, 'Yes — he ran terrible.' McCoy in fact proved a champion tipster, later riding to emphatic victory Lady Cricket, whom he had declared the bet of the day, and picking West Hill Rose, the 3-1 winner of the three-mile hurdle for Victor Dartnall, whose Barnstaple stable has been winning considerable respect this season.

It wasn't only McCoy, though, who was on sparkling form at Newbury. Gilbert Macaire had brought Japhet to Newbury to contest the novice chase unbeaten in ten races. But a cool ride by Dean Gallagher, delivering a late challenge as the odds-on favourite began to tire, brought victory instead for Paul Webber's Frosty Canyon. Dean was smiling when I met him on his way into the parade ring to mount Frosty Canyon. By the time he was walking out of it after the second, a novices hurdle, you could see every tooth he has left. In the

heavy ground Dean had ridden a peach of a race too on Eternal Spring, moving up quietly through the field and again timing his challenge to perfection. Owner Paul Green, who stuck with Dean Gallagher through his much publicised troubles, declared afterwards, 'The man's a great jockey and other people ought to take more notice of it.' Paul Webber said of Frosty Canyon after his victory, 'He doesn't get beaten in a struggle. He's a horse you'd want on your side in a scrap.' Others might say the same of Dean, who's had to fight off more than one kind of demon on the way.

In the Tote Gold Trophy McCoy stole the race on Copeland, kicking on early in the straight and going right away from the field. Again it showed his tactical acumen. Copeland is not one who has always shown the spirit to cope with adversity. So McCoy simply made sure he did not get in a scrap with anything alongside him, and only Rooster Booster came out of the pack to give any kind of chase. Copeland isn't in the Champion Hurdle. But the Aon Chase gave us plenty to think about for the Gold Cup. Nicky Henderson's talented Bacchanal won the race in the end in powerful style. But his jumping at times was overdeliberate and at other times took him way out to the right. As Nicky said afterwards: 'He has his own way of doing it, but his engine is supreme.'

Stable jockey Mick Fitzgerald had picked the Lloyd-Webbers' horse on the day over the yard's other candidate Marlborough, owned by Sir Robert Ogden. He was vindicated in that Marlborough only finished third. But on ground that did not suit him, running for the first time in 288 days, you would have to say that Marlborough, already proven over the Cheltenham course, ran the better trial of the two.

I could happily spend a week listening to Mick Fitzgerald dissecting a race (some would say that's about how long he would take if without a ride in the next) and he declared that Bacchanal too would come on for the race. But he admitted to his frustration with the horse round the first circuit, saying 'he was being silly about the job' and that he cannot be trusted to do things for himself. 'Let go of this one's head and he is lost.' Of Marlborough he says, 'If you've got a horse that's already won at Cheltenham you're halfway there,' and I would not be surprised to see Mick Fitzgerald back in the Ogden colours for the big one.

As for Nicky Henderson, he admits that it will be 'horrible', a sort of enjoyable hell for the next five weeks having two live contenders for the Gold Cup to keep sound until the day. 'But we're just very lucky to have horses like this to go into battle with.' The trainer being known as a serial fretter I asked Diana Henderson what life will be like. 'Not easy,' she replied, with what I suspect was the understatement of the year.