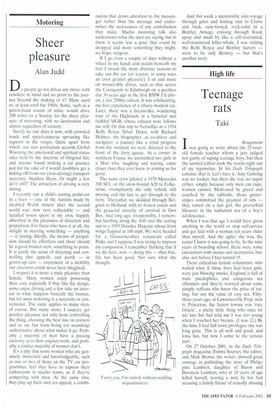 Do people go for drives any more, with nowhere in mind and no point to the journey beyond the making of it? Many used to, at least until the 1960s. Some, such as a petrol-head cousin of mine, would drive 200 miles on a Sunday for the sheer pleasure of motoring, with no destination and almost regardless of scenery.

Surely no one does it now, with crowded roads and speed-cameras sprouting like ragwort in the verges. Quite apart from which, our new puritanism accords Global Warming the emotional and spiritual status once held by the doctrine of Original Sin, and anyone found making a car journey just for the sake of it would doubtless get a ticking-off from our (non-driving) transport secretary, Stephen Byers. Or might a few do it still? The attraction of driving is very strong.

I recently saw a child's rusting pedal-car in a barn — one of the Austins made by disabled Welsh miners after the second world war, now very collectable — and recalled hours spent in my own, happily absorbed in the pleasures of direction and propulsion. For those who have it at all, the delight in steering something — anything — is lasting. Ideally, the means of propulsion should be effortless and there should be a good bonnet view, something to point. It is partly the sense of directing and controlling that appeals, and partly — in grown-up cars — enjoyment of a mobility our ancestors could never have imagined.

I suspect it is more a male pleasure than female. Many women enjoy possessing their cars, especially if they like the design, some enjoy driving and a few take an interest in what happens beneath the bonnet, but for most motoring is a necessity or convenience. The same applies to many men, of course. But many more, I suspect, get positive pleasure not only from controlling the thing, choosing the best line on corners and so on, but from being (or sounding) authoritative about what makes it go. Probably a majority of men have a passing curiosity as to how engines work, and probably a similar majority of women don't.

It's a pity that some women who are genuinely interested and knowledgeable, such as one or two of those on the TV car programmes, feel they have to express their enthusiasm in macho terms, as if they're competing with men. At the same time they play up their own sex appeal, a combi

nation that draws attention to the messenger rather than the message and undermines the seriousness of any contribution they make. Macho motoring talk also undermines what the men are saying, but in them it seems less a pose that could be dropped and more something they might, we hope. outgrow.

If I go even a couple of days without a wheel in my hands and pedals beneath my feet I invent the most abstruse reasons to take out the car (or tractor, in some ways an even greater pleasure). I sit and muse on memorable drives, such as that across the Cairngorm to Edinburgh on a peerless day 30 years ago in the first BMW I'd driven, a fast 2500cc saloon. It was exhilarating, my first experience of a (then) modern car. Later, there was a dream-like, wandering tour of the Highlands in a battered and faithful MGB, whose exhaust note follows me still. Or that trip to Versailles in a 1954 Rolls Royce Silver Dawn, with Richard Holmes, the biographer, as co-driver and navigator, a journey like a royal progress from the moment we were directed to the front of the ferry queue. At a corner in northern France we astonished two girls in a Mini who, laughing and waving, came closer than they ever knew to joining us for good.

The same crew piloted a 1970 Mercedes 300 SEL on the snow-bound A20 to Folkestone, triumphantly the only vehicle still moving and the last to get through to the ferry. Thereafter we skidded through Belgium to Holland, with its frozen canals and the peaceful anarchy of carnival in Den Bos. And long ago, irresponsibly, I remember hurtling along the A40 into the setting sun in a 1959 Daimler Majestic whose front wings flapped at 100 mph. We were headed for a Gloucestershire restaurant called Pinks and I suppose I was trying to impress my companion. I remember thinking that if we die here. now — doing this — then fine, life has been good. Not sure what she thought. And this week a memorable solo voyage through gales and lashing rain to Crewe and back, sure-footed, rock-solid in a Bentley Arnage, cruising through flood, spray and small fry like a self-restrained, well-mannered killer-whale. I was visiting the Rolls Royce and Bentley factory — soon to be only Bentley — but that's another story.