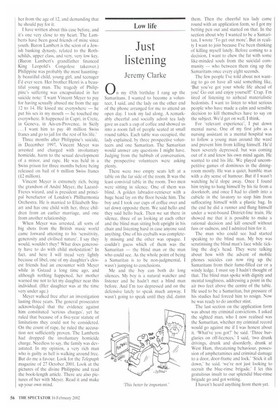 0 n my 45th birthday I rang up the Samaritans. I wanted to become a volunteer, I said, and the lady on the other end of the phone arranged for me to attend an open day. I took my lad along. A remarkably cheerful and socially adroit tea lady gave us each a cup of coffee and showed us into a room full of people seated at small round tables. Each table was occupied, the lady explained, by three prospective volunteers and one Samaritan. The Samaritan would answer any questions I might have. Judging from the hubbub of conversation, the prospective volunteers were asking plenty.

There were two empty seats left at a table on the far side of the room. It was the least convivial table in the room. Two men were sitting in silence. One of them was blind. A golden labrador-retriever with a huge head lay on the floor beside him. The boy and I took our cups of coffee over and sat down opposite them. We said hello and they said hello back. Then we sat there in silence, three of us looking at each other and the blind man sitting bolt upright in his chair and listening hard in case anyone said anything. One of his eyeballs was completely missing and the other was opaque. I couldn't guess which of them was the Samaritan the blind man or the man who could see. As the whole point of being a Samaritan is to be non-judgmental, I wasn't jumping to conclusions.

Me and the boy can both do long silences. My boy is a natural watcher and listener and he hadn't met a blind man before. And I'm too depressed and on the defensive lately to speak much anyway. I wasn't going to speak until they did. damn them. Then the cheerful tea lady came round with an application form, so I got my betting pen out and started on that. In the section about why I wanted to be a Samaritan, I wrote 'To get out more'. But in reality I want to join because I've been thinking of killing myself lately. Before coming to a decision, I want to chew the fat with some like-minded souls from the suicidal community — who between them ring up the Samaritans once every eight seconds.

The few people I've told about not wanting to go on have all said something like, 'But you've got your whole life ahead of you! Go out and enjoy yourself!' Crap. I'm tired of listening to airhead materialistic hedonists. I want to listen to what serious people who have made a calm and sensible decision to kill themselves have to say on the subject. We'd get on well, I think.

For 'relevant experience', I put down mental nurse. One of my first jobs as a nursing assistant in a mental hospital was to follow a young man around the ward and prevent him from killing himself. He'd been severely depressed, but was coming out of it and knew his own mind again. He wanted to end his life. We played uncompetitive games of dominoes in the diningroom mostly. He was a quiet, humble man with a dry sense of humour. But if I wasn't watching he'd slope away. Once I found him trying to hang himself by his tie from a doorknob, and once I had to climb into a cubicle in the lavatory to stop him from suffocating himself with a plastic bag. In the end he did a runner and flung himself under a west-bound District-line train. He showed me that it is possible to make a rational decision and kill oneself without fuss or sadness, and I admired him for it.

The man who could see had started speaking to the blind man. My boy was scrutinising the blind man's face while tickling the dog's head. They were talking about how with the advent of mobile phones suicides can now ring up the Samaritans from their fume-filled car or a windy ledge. I must say I hadn't thought of that. The blind man spoke with dignity and mental toughness, addressing a point in the air two feet above the centre of the table. He used to be a Samaritan, but pressure of his studies had forced him to resign. Now he was ready to do another stint.

The last section on the application form was about my criminal convictions. I asked the sighted man. who I now realised was the Samaritan, whether my criminal record would go against me if I was honest about it. 'What've you got?' he said. 'Three burglaries on off-licences,' I said, 'two drunk drivings, drunk and disorderly, drunk at West Ham, threatening behaviour, possession of amphetamines and criminal damage to a door, door-frame and lock.—Stick it all down: he said, 'we're not just looking to recruit the blue-rinse brigade.' I let this gratuitous insult to our splendid blue-rinse brigade go and got writing.

I haven't heard anything from them yet.