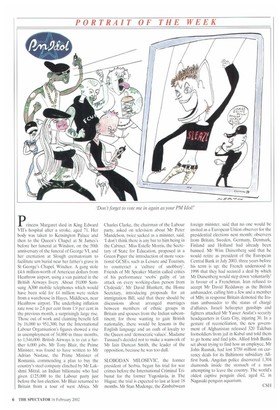 stroke, aged 71. Her body was taken to Kensington Palace and then to the Queen's Chapel at St James's before her funeral at Windsor, on the 50th anniversary of the funeral of George VI, and her cremation at Slough crematorium to facilitate urn burial near her father's grave in St George's Chapel, Windsor. A gang stole £4.6 million-worth of American dollars from Heathrow airport, using a van painted in the British Airways livery. About 19,000 Samsung A300 mobile telephones which would have been sold for £4 million were stolen from a warehouse in Hayes, Middlesex. near Heathrow airport. The underlying inflation rate rose to 2.6 per cent from 1.9 per cent in the previous month, a surprisingly large rise. Those out of work and claiming benefit fell by 16,000 to 951,300, but the International Labour Organisation's figures showed a rise in unemployment of 34,000 in three months, to 1,546,000. British Airways is to cut a further 6,000 jobs. Mr Tony Blair, the Prime Minister, was found to have written to Mr Adrian Nastase, the Prime Minister of Romania, commending a plan to buy the country's steel company clinched by Mr Lakshmi Mittal, an Indian billionaire who had given £125,000 to the Labour party just before the last election. Mr Blair returned to Britain from a tour of west Africa. Mr

Charles Clarke, the chairman of the Labour party, asked on television about Mr Peter Mandelson, twice sacked as a minister, said, 'I don't think there is any bar to him being in the Cabinet.' Miss Estelle Morris, the Secretary of State for Education, proposed in a Green Paper the introduction of more vocational GCSEs, such as Leisure and Tourism, to counteract a 'culture of snobbery'. Friends of Mr Speaker Martin called critics of his performance 'snobs' guilty of 'an attack on every working-class person from Clydeside'. Mr David Blunkett, the Home Secretary, introducing proposals for an immigration Bill, said that there should be discussions about arranged marriages between members of ethnic groups in Britain and spouses from the Indian subcontinent; for those wanting to gain British nationality, there would be lessons in the English language and an oath of loyalty to the Queen and 'democratic values'. Madame Tussaud's decided not to make a waxwork of Mr lain Duncan Smith, the leader of the opposition, because he was too dull.

SLOBODAN M1LOSEVIC, the former president of Serbia, began his trial for war crimes before the International Criminal Tribunal for the former Yugoslavia, in The Hague; the trial is expected to last at least 18 months. Mr Stan Mudenge, the Zimbabwean

foreign minister, said that no one would be invited as a European Union observer for the presidential elections next month; observers from Britain, Sweden, Germany, Denmark, Finland and Holland had already been banned. Mr Wim Duisenberg said that he would retire as president of the European Central Bank in July 2003, three years before his term is up; the French understood in 1998 that they had secured a deal by which Mr Duisenberg would step down 'voluntarily' in favour of a Frenchman. Iran refused to accept Mr David Reddaway as the British ambassador, calling him a Jew and a member of MI6; in response Britain demoted thc Iranian ambassador to the status of chargé d'affaires. Israeli helicopter gunships and fighters attacked Mr Yasser Arafat's security headquarters in Gaza City, injuring 30. In a gesture of reconciliation, the new government of Afghanistan released 320 Taleban footsoldiers from jail in Kabul and told them to go home and find jobs. Allied Irish Banks set about trying to find how an employee, Mr John Rusnak, had lost $750 million on currency deals for its Baltimore subsidiary Allfirst bank. Angolan police discovered 1,304 diamonds inside the stomach of a man attempting to leave the country. The world's oldest captive penguin died, aged 42, in Nagasaki penguin aquarium.