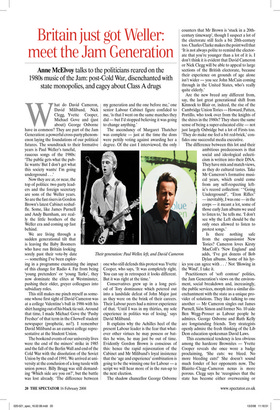 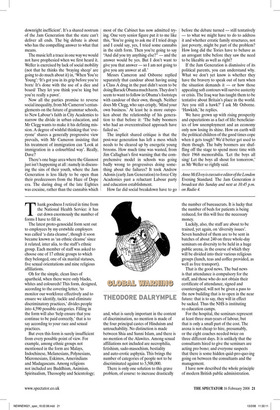 Anne McElvoy talks to the politicians reared on the 1980s music of the Jam: post-Cold War, disenchanted with state monopolies, and cagey about Class A drugs What do David Cameron, David Miliband, Nick Clegg, Yvette Cooper, Michael Gove and (just about) George Osborne have in common? They are part of the Jam Generation: a powerful cross-party phenomenon laying the foundations of our political futures. The soundtrack to their formative years is Paul Weller’s tuneful, raucous songs of the 1980s: ‘The public gets what the public wants/ But I don’t get what this society wants/ I’m going underground . . .’ Now they are at, or near, the top of politics: two party leaders and the foreign secretary are sons of the Weller years. So are the fast risers in Gordon Brown’s latest Cabinet reshuffle. Some, like James Purnell and Andy Burnham, are really the little brothers of the Weller era and coming up fast behind.

We are living through a sudden generational tilt that is leaving the Baby Boomers who have run Britain looking sorely past their vote-by date — something I’ve been exploring in a programme examining the impact of this change for Radio 4. Far from being ‘young pretenders’ or ‘young Turks’, they now dominate the elites at Westminster, pushing their older, greyer colleagues into subsidiary roles.

This still makes me pinch myself as someone whose first sight of David Cameron was at a college Valentine’s ball in 1986 with his shirt hanging out of his black tie suit. Around that time, I made Michael Gove the ‘Pushy Fresher’ of that term in the Cherwell student newspaper (prophetic, no?). I remember David Miliband as an earnest college representative at the Student Union.

The bookend events of our university lives were the end of the miners’ strike in 1985 and the fall of the Berlin Wall and end of the Cold War with the dissolution of the Soviet Union by the end of 1991. We arrived at university at the conclusion of a long tussle with union power. Billy Bragg was still demanding ‘Which side are you on?’, but the battle was lost already. ‘The difference between my generation and the one before me,’ one senior Labour Cabinet figure confided to me, ‘is that I went on the same marches they did — but I’d stopped believing it was going to change anything.’ The ascendancy of Margaret Thatcher was complete — just at the time the dons were pettily voting against awarding her a degree. Of the cast I interviewed, the only one who still defends this protest was Yvette Cooper, who says, ‘It was completely right. You can say in retrospect it looks different. But it was right at the time.’ Conservatives grew up in a long period of Tory dominance which petered out into a landslide defeat of John Major just as they were on the brink of their careers. Their Labour peers had a mirror experience of that. ‘Until I was in my thirties, my sole experience in politics was of losing,’ says David Miliband.

It explains why the Achilles heel of the present Labour leader is the fear that whatever other virtues he may possess or battles he wins, he may just be out of time. Evidently Gordon Brown is conscious of this: hence the rapid rejuvenation of the Cabinet and Mr Miliband’s loyal insistence that the ‘age and experience’ combination is going to be the winning one for Labour — a script we will hear more of in the run-up to the next election.

The shadow chancellor George Osborne counters that Mr Brown is ‘stuck in a 20thcentury timewarp’, though I suspect a lot of the electorate still feels a bit 20th-century too. Charles Clarke makes the point well that ‘It is not always polite to remind the electorate that you’re younger than a lot of it is. I don’t think it is evident that David Cameron or Nick Clegg will be able to appeal to large sections of the British electorate, because their experience on grounds of age alone isn’t wider — you see John McCain coming through in the United States, who’s really quite elderly.’ Are the new breed any different from, say, the last great generational shift from Kinnock to Blair or, indeed, the rise of the Cambridge Union Tories — Howard, Patten, Portillo, who took over from the knights of the shires in the 1980s? They share the same sense of being a super-educated elite — not just largely Oxbridge but a lot of Firsts too. ‘They do make me feel a bit red-brick,’ confides one successful media executive.

The difference between this lot and their ambitious predecessors is that social and ideological eclecticism is written into their DNA. They have mix and match views, as they do cultural tastes. Take Mr Cameron’s formative musical years, which could come from any self-respecting leftie’s record collection: ‘ “Going Underground”, “Eton Rifles” — inevitably, I was one — in the corps — it meant a lot, some of those early Jam albums we used to listen to,’ he tells me. ‘I don’t see why the Left should be the only ones allowed to listen to protest songs.’ Is there nothing safe from the expansionist New Tories? Cameron loves Kirsty MacColl’s ‘New England’ and adds, ‘I’ve got dozens of Bob Dylan albums. Some of his lyrics you can agree with . . .’ Not ‘Blowing in the Wind’, I take it.

Practitioners of ‘soft contour’ politics, the Jam Generation’s views on the environment, social breakdown and, increasingly, the public services, morph into a similar disenchantment with the state as a unique provider of solutions. They like talking to one another — Mr Cameron singles out James Purnell, Siôn Simon and former No. 10 aide Ben Wegg-Prosser as Labour people he admires. George Osborne and Ruth Kelly are longstanding friends. Tory strategists openly admire the fresh thinking of the Lib Dem education spokesman David Laws.

This ecumenical tendency is less obvious among the hardcore Brownites — Yvette Cooper reveals she once wore a badge proclaiming, ‘She cuts: we bleed. No more bleeding cuts!’ She doesn’t sound much fonder of her opponents now. The Blairite–Clegg–Cameron nexus is more porous. Clegg says he ‘recognises that the state has become either overweening or downright inefficient’. It’s a shared nostrum of the Jam Generation that the state can’t deliver all ends. The big debate is about who has the compelling answer to what that means.

The music left a trace in one way we would not have prophesied when we first heard it. Weller is exercised by lack of social mobility (not that he thinks the ‘braying sheep’ are going to do much about it) in, ‘When You’re Young’: ‘It’s got you in its grip before you’re born/ It’s done with the use of a dice and board/ They let you think you’re king but you’re really a pawn’.

Now all the parties promise to reverse social inequality, from Mr Cameron’s entanglements on the future of grammar schools, to New Labour’s faith in City Academies to narrow the divide in urban education, and Mr Clegg wants to make it his defining mission. A degree of wishful thinking that ‘everyone’ shares a generally progressive view prevails, with Mr Cameron insisting that his treatment of immigration can ‘Look at immigration in a colourblind way’. Really, Dave?

There’s one huge area where the Glasnost just isn’t happening at all : namely in discussing the sins of their youth, where the Jam Generation is less likely to be open than their predecessors from the Haze of Dope era. The daring drug of the late Eighties was cocaine, rather than the cannabis which most of the Cabinet has now admitted trying. One very senior figure put it to me like this, ‘You’re going to ask me if I tried drugs and I could say, yes, I tried some cannabis in the sixth form. Then you’re going to say “And did you try anything else?” — and the answer would be yes. But I don’t want to give you that answer — so I am not going to give you any answer at all.’ Messrs Cameron and Osborne replied separately that candour about having using a Class A drug in the past didn’t seem to be doing Barack Obama much harm. They don’t seem to want to follow in Obama’s footsteps with candour of their own, though. Neither does Mr Clegg, who says crisply, ‘Mind your own business.’ At least he is more outspoken about the relationship of his generation to that before it: ‘The baby boomers who had an overcentralised approach have failed us.’ The implicit shared critique is that the post-war generation has left a mess which needs to be cleared up by energetic young brooms. How much time was wasted, from Jim Callaghan’s first warning that the comprehensive model in schools was going badly wrong to progressives doing something about the failures? It took Andrew Adonis (early Jam Generation) to force City Academies past a reluctant Labour party and education establishment.

How far did social breakdown have to go before the debate turned — still tentatively — to what we might have to do to address it and whether erratic family structures, not just poverty, might be part of the problem? How long did the Tories have to behave as an arrogant tribe before they saw the need to be likeable as well as right?

If the Jam Generation is dismissive of its political parents, you can understand why. What we don’t yet know is whether they have the bravery to speak out of turn when the situation demands it — or how those appealing soft contours will survive austerity or crisis. The Iraq war has taught them to be tentative about Britain’s place in the world. ‘Are you still a hawk?’ I ask Mr Osborne. ‘Hawkish,’ he replies.

We have grown up with rising prosperity and expectations as a fact of life: beneficiaries of low unemployment and an economy only now losing its shine. How on earth will the political children of the good times cope when it gets tough? We’d better get used to them though. The baby boomers are shuffling off the stage to spend more time with their 1968 memorabilia. ‘Let the boys all sing/ Let the boys all shout for tomorrow,’ as Mr Weller so rightly said.

Anne McElvoy is executive editor of the London Evening Standard. The Jam Generation is broadcast this Sunday and next at 10.45 p.m. on Radio 4.