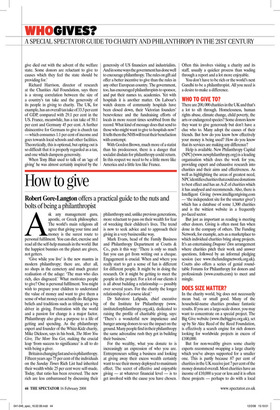 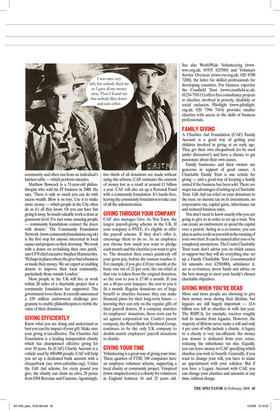 Ask any management guru, apostle, or Greek philosopher. The world’s main religions all agree that giving your time and money is the surest route to personal fulfilment. You can diet, exercise and read all the self-help manuals in the world. But the happiest bunnies on the planet are givers, not getters.

‘Give while you live’ is the new mantra in modern philanthropy; there are, after all, no shops in the cemetery and much greater realisation of the adage: ‘The man who dies rich, dies disgraced.’ What motivates people to give? One is personal fulfilment. You might wish to prepare your children to understand the value of money and want to give them a sense of what money can actually do. Religious beliefs and traditions such as tithing are a big driver in giving. Frustration with the world and a passion for change is a major factor. Philanthropy also gives a purpose to a life of getting and spending. As the philanthropy expert and founder of the Whizz-Kidz charity, Mike Dickson, says in his book, The More You Give, The More You Get, making the crucial leap ‘from success to significance’ is all to do with being a giver.

Britain is changing fast and so is philanthropy. Fifteen years ago 75 per cent of the individuals on the Sunday Times Rich List had inherited their wealth while 25 per cent were self-made. Today, that ratio has been reversed. The new rich are less embarrassed by discussing their philanthropy and, unlike previous generations, more reluctant to pass on their wealth for fear of wrecking their children’s lives. The trend is now to seek advice and to approach their giving in a very businesslike way.

Mark Evans, head of the Family Business and Philanthropy Department at Coutts & Co., puts it this way: ‘There is only so much fun you can get from writing out a cheque. Engagement is crucial. When and where you really start to get a sense of fun is different for different people. It might be in doing the research. Or it might be getting to meet the people in the project. For a lot of our clients it is all about building a relationship — possibly over several years. For the charity the longer relationship is of course ideal.’ Dr Salvatore LaSpada, chief executive of the Institute for Philanthropy (www. instituteforphilanthropy.org.uk), dedicated to raising the profile of charitable giving, says: ‘There’s a wonderful new impatience and hunger among donors to see the impact on the ground. Many people find in their philanthropy the same adrenaline rush they got in building their business.’ For the wealthy, what you donate to is increasingly an expression of who you are. Entrepreneurs selling a business and looking at giving away their excess wealth certainly want to see their money deployed to maximum effect. The secret of effective and enjoyable giving — at whatever financial level — is to get involved with the cause you have chosen. Often this involves visiting a charity and its staff, usually a quicker process than wading through a report and a lot more enjoyable.

You don’t have to be rich or the world’s next Gandhi to be a philanthropist. All you need is a desire to make a difference.

WHO TO GIVE TO?

There are 200, 000 charities in the UK and that’s a lot to sift through. Homelessness, human rights abuse, climate change, child poverty, the arts or endangered species? Some donors know they want to give generously but don’t have a clue who to. Many adopt the causes of their friends. But how do you know how effectively your money is being used? How do you know that its services are making any difference?

Help is available. New Philanthropy Capital (NPC) (www.newphilanthropy.org) is a leading organisation which does the work for you, providing expert and exhaustive research into charities and their aims and effectiveness. As well as highlighting the areas of greatest need, NPC identifies charities that could use donations to best effect and has an A-Z of charities which it has analysed and recommends. Also, there is Intelligent Giving (www.intelligentgiving.com — ‘the independent site for the smarter giver’) which has a database of some 1,300 charities and is the wittiest website in a frequently po-faced sector.

But just as important as reading is meeting other donors. Giving is often most fun when done in the company of others. The Funding Network, for example, acts as a marketplace to which individual charities bring along projects. It’s an entertaining Dragons’ Den arrangement where charities pitch their work and answer questions, followed by an informal pledging session (see www.thefundingnetwork.org.uk). Coutts also offers a series of genial roundtable Forums for Philanthropy for donors and professionals (www.coutts.com) to meet and mingle.

In the charity world, big does not necessarily mean bad, or small good. Many of the household-name charities produce fantastic results. If you are a large-scale donor, you may want to concentrate on a special project. The Big Give website (www.thebiggive.org.uk), set up by Sir Alec Reed of the Reed Foundation, is effectively a search engine for rich donors looking for worldwide projects in excess of £100,000.

But for non-wealthy givers some charity experts recommend swapping a large charity which you’ve always supported for a smaller one. This is partly because 87 per cent of charities in the UK receive just 7 per cent of the money donated overall. Most charities have an income of £10,000 a year or less and it is often these projects — perhaps to do with a local community and often run from an individual’s kitchen table — which perform miracles.

Matthew Bowcock is a 51-year-old philanthropist who sold his IT business in 2000. He says, ‘There is only so much you can do with excess wealth. Blow it on toys. Use it to make more money — which people in the City often do as it’s all they know. Or you can have fun giving it away. So much valuable work is done at grassroots level. I’ve met some amazing people — community foundations connect the doers with donors.’ The Community Foundation Network (www.communityfoundations.org.uk) is the first stop for anyone interested in local causes and projects on their doorstep. ‘We work with a donor on revitalising their own patch,’ says CFN chief executive Stephen Hammersley. ‘Perhaps in places where the giver had a business or made their money. We are expert at enabling donors to improve their local community, particularly those outside London.’ Most people in the UK will live or work within 20 miles of a charitable project that a community foundation has supported. The government loves them. It recently announced a £50 million endowment challenge programme to enable philanthropists to treble the value of their donations.

Know what you are doing and understand as best you can the impact of your gift. Make sure your giving is tax-effective. The Charities Aid Foundation is a leading independent charity which has championed effective giving for over 30 years. Its (CAF) Charity Account is a vehicle used by 400,000 people. CAF will help you set up a dedicated bank account with a chequebook (see www.cafonline.org). Under the Gift Aid scheme, for every pound you give, the charity can claim an extra 28 pence from HM Revenue and Customs. Agonisingly, two thirds of all donations are made without using this scheme; CAF estimates the amount of money lost as a result at around £1 billion a year. CAF will also set up a Personal Fund with a community foundation. It’s hassle-free, leaving the community foundation to take care of all the administration.

GIVING THROUGH YOUR COMPANY

CAF also manages Give As You Earn, the largest payroll-giving scheme in the UK. If your company is PAYE, it’s eligible to offer the payroll scheme. If they don’t offer it, encourage them to do so. As an employee you choose how much you want to pledge each month and the charities you want to give to. The donation then comes painlessly off your gross pay, before the taxman touches it. For example, if you give £10 per month at the basic rate tax of 22 per cent, the tax relief at that rate is taken from the original donation, so the cost to you is £7.80 a month. If you are a 40 per cent taxpayer, the cost to you is £6 a month. Regular donations are of huge benefit to charities because they can make financial plans for their long-term future — knowing they can rely on the regular gifts of their payroll donors. If a company matches its employees’ donations, these costs can be set against corporation tax. Coutts’s parent company, the Royal Bank of Scotland Group, continues to be the only UK company to double-match employees’ payroll donations to charity.

Volunteering is a great way of giving your time. Three quarters of FTSE 100 companies have an employee volunteer scheme, supporting a local charity or community project. Vinspired (www.vinspired.com) is a charity for volunteers in England between 16 and 25 years old. See also WorldWide Volunteering (www. wwv.org.uk; 01935 825588) and Voluntary Service Overseas (www.vso.org.uk; 020 8780 7200), the latter for skilled professionals for developing countries. For business expertise the Cranfield Trust (www.cranfield.ac.uk; 01234 750111) offers free consultancy projects to charities involved in poverty, disability or social exclusion. Pilotlight (www.pilotlight. org.uk; 020 7396 7414) provides smaller charities with access to the skills of business professionals.

A Charities Aid Foundation (CAF) Family Account is a good way of getting your children involved in giving at an early age. They get their own chequebook (to be used under discussion!) and have a chance to get passionate about their own causes.

Family businesses and their owners are generous in support of good causes. A Charitable Family Trust is one vehicle for giving — and a good way of keeping a family united if the business has been sold. There are major tax advantages of setting up a Charitable Trust. Gift Aid tax relief on your donations to the trust; no income tax on its investments, no corporation tax, capital gains, inheritance tax and reduced business rates.

You don’t need to know exactly who you are going to give to in order to set up a trust. You can create an endowment or spend the capital over a period. Acting as a co-trustee, you can play as active a role as you wish in the running of your own trust. It can be named after you or be completely anonymous. The Coutts Charitable Trust team don’t advise you on which causes to support but they will do everything else: set up a Family Charitable Trust (recommended for amounts over £250,000), administer it, act as co-trustees, invest funds and advise on the best strategy to meet your family’s chosen charitable objectives.

More and more people are choosing to give their money away during their lifetime, but legacies are still hugely important — £1.6 billion was left to charities in wills last year. The RSPCA, for example, receives roughly half its income from legacies. However, the majority of Britons never make a will and only 4 per cent of wills include a charity. A legacy to a charity is very tax-efficient: the money you donate is deducted from your estate, reducing the inheritance tax due. Equally, you can leave money to CAF specifying which charities you wish to benefit. Generally, if you want to change your will, you have to make an appointment with your solicitor. But if you have a Legacy Account with CAF, you can change your charities and amounts at any time, without charge.